You're All Invited to a Feather Party!

Bring your own feather and we'll tickle each other till our giggling makes our bellies hurt! Doesn't that sound like fun? Aw come on now, don't be an old stick in the mud. It'll be loads of fun!

OK, OK, that's not exactly what a Feather Party is all about. But the idea had some merit, didn't it?

Actually, a Feather Party is an event which is exclusive to Detroit's Eastside Polish community. That doesn't mean that you all can't come, it just means you're not gonna find one of these parties hosted anywhere else on earth. Only in Polish Detroit. LOL!

The history of the Feather Party goes like this. The 1920s was the peak period when immigrants arrived in the Polish neighborhoods of Detroit. The Archdiocese couldn't build churches fast enough and Masses were commonly filled to capacity. The new arrivals had little money and struggled to make their way in a country whose language and customs were unfamiliar to them. While they loved their homeland and their Polish traditions they also wanted very much to become Americans and adopt American traditions too. 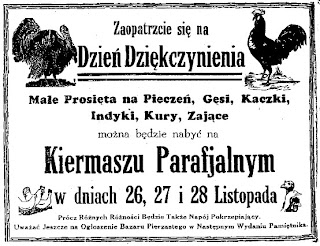 Thanksgiving Day with roast turkey, stuffing, cranberries, and pumpkin pie was totally foreign to the newly arrived Polish immigrants. Not only was the holiday of Thanksgiving unfamiliar to them but so were the foods. Turkey, cranberries, and pumpkin were not served in Polish homes. The new immigrants lived on a tight budget that became even tighter after the stock market crash in October of 1929. Times were tough and most families couldn't afford to put together a Thanksgiving feast.

The parish trustees at Sweetest Heart of Mary Church in Detroit got together and discussed the situation. They determined that the heart of the Thanksgiving dinner was the turkey and that if they could help some of the parishioners get a turkey they could start them on their way to celebrating this very American holiday. So they decided to buy some live turkeys and raffle them off. Why not make a party of it? Voila! The Feather Party is born!

As it turns out, the church was very nearby the Russell Street slaughter houses. So buying the live turkeys was fairly easy to do. While they were at it they also purchased some ducks, geese, chickens, rabbits, and even some small pigs. They bought all these critters on the Saturday before Thanksgiving and kept them overnight in the school basement. The first Feather Party was held at Sweetest Heart of Mary parish the next day, Sunday, November 24, 1929, at 7:00 in the evening.

Raffle tickets were 10¢ apiece and they sold lots of them. Parishioners bought them enthusiastically hoping to win themselves a Thanksgiving dinner! The profit made from the sale of the raffle tickets went to the school fund. The event was well attended, refreshments were served, and a good time was had by all. It was such a success that it was repeated the following three nights! 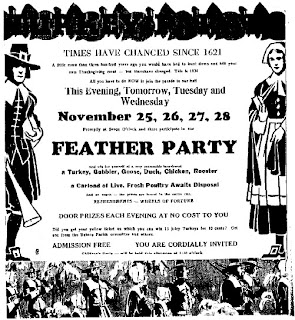 An ad for the Feather Party from 1934

The parishioners had to determine for themselves how to get their winnings home. Some were seen walking down the street with their turkey on a rope leash. Others rode the streetcar with a live chicken or duck tucked under their arm. It must've been a comical site to see!

Once the winners got their fowl home, they had to find a place to keep it. It wouldn't be slaughtered until the night before thanksgiving. Some people kept theirs in their basement, others kept theirs tethered on the back porch. Eventually, when Wednesday night came, someone in the family would have to cut the bird's head off. Most of the Polish immigrants had been rural farmers back in Poland so killing fowl would not have been unusual to them. But for their city born children it was quite traumatic to see a chicken running around without a head!

After the blood was drained, the bird would be plucked and singed of feathers, and made ready to roast for a real American-style Thanksgiving dinner. It's a good bet there was probably some kapusta (saurkraut), pierogi, and kielbasa on the table too ;-)

I'm virtually certain some of the folks on my family tree attended these Feather Parties. I don't have a diary or journal saying so but they were in the right place at the right time. And who could pass up a chance to attend a Feather Party?

This year's Feather Party will be held this Sunday, November 18th right after the 10:30 AM Polka Mass. Come on over and join the fun! I haven't been to a Feather Party myself but I'm planning to attend this year's event. Won't you join me? I'll have my camera with me and I'd love to take a picture of you walking out with your turkey on a leash!

Actually, the turkeys given out now are frozen ones. But wouldn't you just love to see someone trying to get a live turkey into the trunk of their car to take home to for Thanksgiving dinner? Now that would be a Kodak moment.