Christmas At My Elementary School 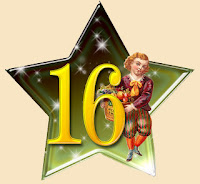 When I think back to Christmases when I was a child I remember a time when we didn't have to be politically correct about everything. The city I grew up in, Dearborn Michigan, had a homogeneous population. Virtually everyone in the city was white, blue collar, and Christian. No one worried about offending anybody else using terms with a religious connotation. There were no allowances made for anyone who was " different", because nobody was different.

I attended the public school closest to my house. At school, we had "Christmas parties" and sang in "Christmas recitals". I remember having discussions about the various names that Santa Claus went by in other countries but we never talked about December holidays for those of other religious faiths such as Hanukkah.

In art class we made angels along with our snowflakes and wreaths. In music class we sang Hark the Herald Angels Sing along with Jingle Bells. In fact, it wasn't until I was in the upper elementary grades that I even realized that symbols of Christmas fell into two categories, religious and secular. For me they were all tied together.

In my elementary school we had French class as a part of our regular instruction. I remember talking about Pere Noel and how children in France celebrated Christmas. We also learned to play musical instruments in the 4th, 5th, and 6th grades. I played violin and I remember that the Christmas concert was always my favorite. It was much easier to play music that you recognized and Christmas carols were very recognizable.

Probably my happiest and most vivid school memory of Christmas time would have to be singing Christmas songs in our vocal music class. I remember standing on the risers and looking out the big windows of the room to see big fluffy snowflakes falling. The song I enjoyed singing the most was Up On the House Top. It was so fun to imagine Santa Claus coming while watching the snow fly. I was so excited about Christmas coming!

Here's a picture of the front of my elementary school. The music room was on the main floor just inside the big bay windows behind the pine tree (inside the second floor bay windows was the library). This is a current photograph and it appears that a good many of the windows have been covered up (top 2/3 of each window), probably for energy savings. They weren't covered back in my day. The music room and library were the sunniest rooms in the school. 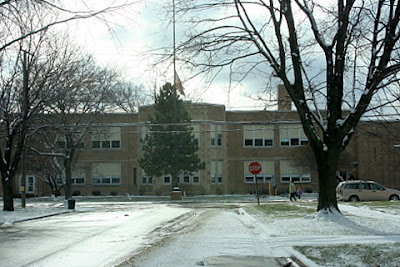 [The Advent calendar number graphic used in this post was created by NicNic at the NBK blog.]
Posted by Jasia at 1:00 AM