I wouldn't go so far as to say I was worried about the approach of the new millennium, but I was definitely concerned. With all the media hype about the Y2 K issues affecting computers and computer aided devices the world over, how could I not be? I am a techie girl, after all. And the thought of losing the use of my technology was akin to losing the use of my right arm. Not to mention my concern over the possibility of losing my money if the banks' computers went kaflewy and couldn't find my account!

Living in a cold weather climate, I was also concerned about staying warm. If the power grid went down over a large area, where would we go to be warm? I hate to be cold!

For my own peace of mind I insisted on buying a generator. I was pretty sure we could stay connected to the media and stay warm if we had one. My husband agreed and took care of purchasing one large enough to meet our needs. That put my mind at ease.

We don't always celebrate New Year's with a party but I thought it would be a good idea to host one for New Year's Eve 1999 so that we could stay close to home in the event that something dire did happen. We invited a few of our neighbors and friends to the party and I preceded to plan for a great evening of fun.

I had a large wall mural made up with the names of everyone attending the party, to use as a backdrop for pictures. I bought one of those time capsule kits that were heavily advertised at the time so that we could record our reflections and projections on the verge of the New Millennium. Of course I bought lots of party hats, noisemakers, confetti, food and champagne as well. And every well dressed Doberman needs a tuxedo for New Year's Eve so I bought my dog one of those too. 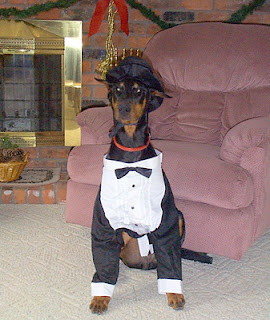 And since there's nothing like live entertainment at a good party, I hired my daughter and two of her friends to play for us. 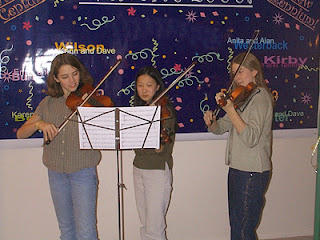 Being my mother's daughter, I like to save mementos. So I went

out and bought a few things to remind me of the year 2000. I bought a rhinestone pin, a scarf, a water globe, and a dessert plate. Friends and relatives also gifted me with a picture frame. So I have quite a few keepsakes kicking around to remind me of the turn of the century and millennium.

Like a lot of other people I watched CNN on and off throughout New Year's Eve day to see how events around the world were unfolding. I thought the celebrations were spectacular and with each one I became more reassured that my house wouldn't go dark and cold at the stroke of midnight. We had about 25 people at the party that evening and everyone was in good spirits. We had a wonderful time together and I have very happy memories of ringing in the New Year 2000.

Oh, and the time capsule is still sitting in the cupboard in my laundry room. I told everyone I would keep it until the year 2025 and then I would make every attempt to return each person's reflections and projections to them so that they could look back and remember the night we rang in the New Millennium together.
Posted by Jasia at 4:17 PM