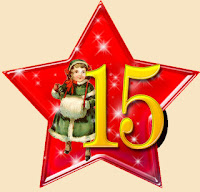 I've been debating what to write about for this grab bag edition of the Advent Calendar of Christmas Memories. I had several possibilities in mind but couldn't settle on one of them. And then footnoteMaven issued a challenge to blog our favorite Christmas carol and in that instant I knew just what I wanted to write! (Great timing fM!)

As memories go, this isn't from long ago during my childhood. The memories I have of kolędy (pronounced, coal-EN-deh; it is the Polish word for "Christmas Carols", in the plural form) are from the last 7-8 years. You might think that I was raised in an ethnically Polish neighborhood and attended a Polish church all my life given how much I write about things Polish, but that is not the case. The neighborhood I grew up in was as diverse as an all-white, blue-collar neighborhood could be. In fact, there wasn't another Pol-Am family on my block until I was in middle school. Then one more moved in when I was in high school.

The church our family attended had no ethnic affiliation. In all the years I attended Mass there, we never had a Polish priest or sang a Polish carol. I don't remember my mom ever singing any Polish carols (she used to like to sing and hum when she was baking) even though, as I later learned, she knew the words to them all by heart. I actually discovered and embraced my Polish heritage as a direct result of my genealogy research, which I started only 10 years ago.

Without going through a whole time line of my genealogy research, let's just say that a couple years into it I began searching for living relatives in Poland (more details to come in a post next month). I was successful at finding some and they have enriched not only my knowledge of my family's history but my knowledge of Polish culture as well. We exchanged Christmas gifts for a few years and one of the first gifts they sent me was a couple CDs of kolędy.

Polish carols, besides being beautiful to listen to, have a whole tradition that goes along with them. Not only do people sing them, but they act them out too. There are four different Polish caroling traditions, szopki and Herody are visual reenactments of the birth of Christ. Gwiazdory is caroling with a star where one of the carolers carries a star on a pole lit from within by a candle. And turon is the oldest form of caroling in Poland and it involves having one of the group dressing up as a wooly beast. This last one involves antics and frivolity.

The best description of the caroling tradition I could find is this (from the PolAmJournal.com site):

KOLEDNICY (Polish carolers) could best be described as caroler-masqueraders. One carries a large illuminated star on a pole, another comes carrying a Christmas crib and the others are dressed as King Herod, Death, an Angel, Devil, soldier, priest, peasant, beggar, Gypsy and/or Jew (or couples). As the season wears on, the religious figures disappear and a wild ox [wooly beast], bear and stork are often added.

The "season" referred to is the caroling season. It starts with Midnight Mass on Christmas and continues through to January 6th. (That's not the end of the Polish Christmas season though. It continues until Candlemas on February 2nd.)

The English version is not a literal translation but an English adaptation done by Rev. Czesław Michal Krysa, S.L.D. in his book, A Polish Christmas Eve; Traditions and Recipes, Decorations and Song

Here are a couple photos taken at my cousin's house in Brzeg, Poland. You can see the carolers dressed up in common caroling attire. 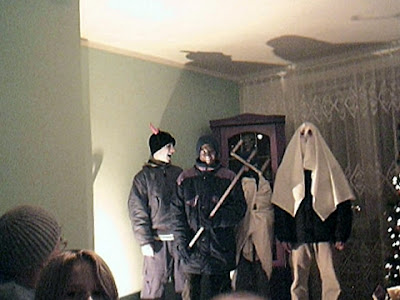 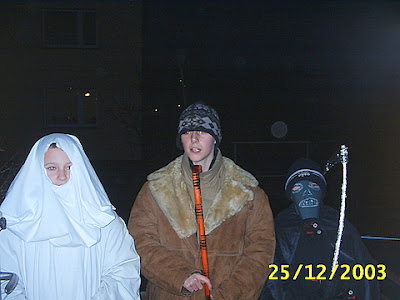 So, what does all this have to do with my memories? I remember very fondly sitting in the Polish church I now attend for Midnight Mass on Christmas with my immediate family, my mom, and my brother and sister in law, singing these songs as best we could. For my mom, they brought back memories of being in the choir of her church in the west side Polish neighborhood of Detroit where she grew up. The rest of us mangled the words as you would expect of non-Polish speakers. We chuckled as we struggled to pronounce the words that didn't come naturally to us. But our spirits were high!

[The Advent calendar number graphic used in this post was created by NicNic at the NBK blog.]
Posted by Jasia at 1:55 AM