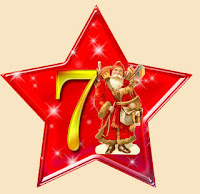 I don't know about you but this last week of remembering Christmases past has been a lot of fun for me. I'm having a great time recording all my happy holiday memories and I look forward to continuing my writing for another 17 days. But today I'd like to take a little time out from my trip down memory lane and share with you a few of my mother's memories of Christmas from her childhood.

Up until the last few years of my mother's life when Alzheimer's took its toll on her, my mom's mind was sharp as a tack and so was her memory. She could tell you the birth date of each of her 31 nieces and nephews right off the top of her head, she could remember how much she earned at her first job, and she had lots of detailed memories of ordinary events from her childhood. I remember on a number of occasions thinking that at age 78, or 80, or 83 her memory of her childhood was better than my memory of my childhood!

I remember asking my mom a number of times to tell me about Christmas when she was a kid. For someone who had such a sharp memory she never had much to say on the subject. I'd ask lots and lots of questions thinking she had just forgotten and hoping I could trigger those memories. Though why I thought she'd have forgotten about a special occasion like Christmas when she could remember every day events in great detail is beyond me. Finally, one day she just looked at me and said, "Look, Christmas just wasn't a big deal when I was a child. People didn't go all out to celebrate like they do nowadays."

I didn't quite understand what she meant by that then but I came to realize what she meant some years later as the pieces of the puzzle of my family history came together. What she meant was that her parents celebrated Christmas more or less Polish-style, as a rather somber and Holy affair, big on the religious aspects not so big on the decorating, festive, gift-giving aspects. Here are the bits and pieces of my mother's memories of Christmas as a child that I was able to get from her over the years.

The Christmas Tree: My mom's family always had a Christmas tree, a 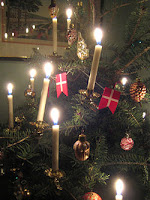 real one of course. And despite the fact that her parents came from Poland where it was common to hang one's Christmas tree from the ceiling (see comments 6 & 7 on this link) (I'm intending to write a whole series on Polish Christmas traditions one of these days... probably next year, but I can't get into it now.) they placed theirs on the floor according to the tradition in their new homeland, America. Mom didn't remember any specific ornaments but what she did remember were the candles. Back in those days, before Christmas trees were lit with strands of electrical lights, small candles were placed in candle holders that clipped onto tree branches. The candles were only lit one time and that was on Christmas Eve. The family would gather around the tree (this would be in the evening after the Wigilia dinner), and my grandfather and grandmother would light the candles one by one. There were quite a few candles, as she remembered, "maybe a couple dozen". My grandfather always had at a bucket of water at the ready because of the fire danger. Fortunately, he never had to use it. My mom remembered how beautiful the Christmas tree looked for those few minutes when the candles were lit. I think she mentioned that they sang some Christmas carols while they gazed at the tree. She marveled at the beauty of it and that's what stuck in her mind.

Christmas Gifts: Despite the fact that my mother's family was quite well off for recent immigrants there were no lavish gifts given to the children at Christmas. My mom remembers getting things such as new shoes, oranges, some candy, a new dress to wear to church on Christmas, and small playthings such as a ball and jacks. She remembered only one time when she got the kind of gift that kids get now for Christmas and that was the year she got a doll. At the time of the stock market crash in 1929, my mom was 11 years old. So during her preteen and teenage years the country was struggling through the Great Depression. She often talked about the tough times she lived in. Because her parents owned a bakery her family never went hungry, never lost their house, and never had to go without basic necessities. But she was haunted by memories of people in her neighborhood who she knew went to bed hungry and stood in line in the cold outside the bakery waiting for day old bread and baked goods because even at Christmas fresh baked goods were not affordable for them. She remembered seeing house after house being abandoned as people moved out leaving their furniture at the curb. Most often they moved in with other family members. There was no room for additional furniture so that was left behind.

One year for Christmas my grandfather bought my grandmother the most exquisite diamond necklace you've ever seen. My mother always said it was the first Christmas they were married but I don't think that was the case. The first Christmas after they were married my grandmother was seven months pregnant with her first child and they were just about to close on the purchase of their bakery. I don't think they would've had the kind of money then to purchase a piece of jewelry of this type. (When my aunt had it appraised for insurance purposes a while back she was told it was museum quality, essentially "priceless".) I think the necklace was purchased during the "Roaring Twenties" when economic times were good and my mom's family was living the good life. In any event, the necklace was later given to my aunt who was the oldest daughter. She never had any children and promised to leave the necklace to me when she died. (I am the only granddaughter.) However, other individuals took advantage of my aunt in her failing health and they are now in possession of the necklace which I'm sure I will never see again. (Bitter. Yes I'm bitter.)

Holiday Dinners: My grandmother cooked a big dinner on Christmas Eve and her two sisters and their families always came over. My grandmother made her own kielbasa, wine, raspberry liqueur, pierogi, and soup. Of course there were always a lot of baked goods from the bakery served as well. On Christmas Day everyone would eat leftovers, no cooking allowed in keeping with Polish tradition.

Church: The family always attended Mass at Assumption of the Blessed Virgin Mary Church in Detroit on Christmas morning. When my mother was in high school and until she married at age 25, she sang in the church choir. She knew all the old Polish koledy by heart.

Winter Fun: During the Christmas vacation from school and at other times during the winter, my grandfather took my mother and her sister and brother sledding at Rouge Park. I asked my mom if she ever went ice skating at Belle Isle. She said she thought they had once or twice but what she remembered better was the fun they had sledding at Rouge Park.

Santa Claus: My mother shared a bedroom with her sister who was a year older than her. The two girl's bedroom was upstairs and their parents' bedroom was downstairs. My mother told me that one Christmas Eve she and her sister went to bed but they didn't go to sleep. Instead, they cracked the bedroom door open and waited for sounds of Santa. I don't remember if she said if at that point they knew it was their parents and not Santa Claus who brought the presents or not. Anyway, after the house got quiet and the lights were turned out downstairs they knew their parents had gone to bed. My mother said they waited just long enough for her parents to fall asleep and then they ran downstairs and woke them up informing them that Santa Claus had been there. My grandparents didn't appreciate that too much and told the girls that it was the middle of the night and they had to go back to bed. I think after that time they always opened their presents on Christmas Eve before everybody went to bed!

How I wish I had a picture of that candlelit Christmas tree to share with you. Unfortunately, I don't (the one included above is from Wikipedia). Here is the only Christmas picture I have from my mother's childhood. As you can see, it was taken outdoors. According to the date on the back of the photo, this was Christmas of 1926. 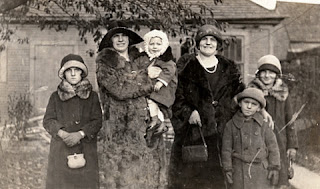 My mother, Lucyna, on the far left (looking rather grim), was 8 years old. Next to her was my grandmother's sister Helena (age 26) holding her daughter Charlotte (age 1.5). Next, in the dark coat, is my grandmother Sophia (age 32) with her arm around son Sigmund (age 5). And on the far right (looking like she's up to something) was my mom's sister Helen (age 9). At this point in time my grandmother had been in the U.S. for 13 years, my grandfather 14. Grandma's sister Helena had been here 6 years. The photo was taken by Helena's husband Stanley who had been here 16 years. Most first generation Polish immigrants didn't do as well as this family. Notice the lavish fur coats the women had on? Even the girls had fur collars on their coats. My grandmother had what looks like a string of pearls on. I don't know if they were real or not but it seems likely. She did own a nice string of pearls I'm told though I never saw them. The photo was taken in my grandparents' back yard on 30th Street in Detroit. The building behind them was the carriage house/garage. In spite of how bundled up everyone was in their fur coats I'm guessing it must have been a mild fall/early winter because the plum tree still had leaves on it.

The family dynamic between my mother and her sister was a common one. Helen, being the older and somewhat wiser/more experienced one, was the instigator who would do something that would make my mom cry/wiggle/yell/laugh etc. My grandparents wouldn't see what Helen had done but would react to my mom's outburst with scolding. I'm imagining that's what was going on in this picture. Helen has that mischievous look on her face that seems to suggest she got away with something while my mom looks like she's just been scolded.

That sums up my mom's memories of Christmas as a child. I wish I could remember anything my dad might have told me about Christmases when he was a kid but I don't. I asked his sister about that subject a few years back but she only remembered that times were tough (she was born in 1928 and her childhood years were during the height of the Great Depression), their family was very poor.

[The Advent calendar number graphic used in this post was created by NicNic at the NBK blog.]
Posted by Jasia at 1:52 AM