Santa Claus and Me 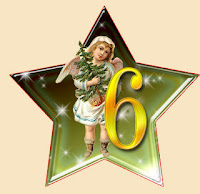 Santa Claus... One of my favorite subjects!

As a child, I remember that Santa Claus came to town on Thanksgiving Day. He arrived at the end of the Thanksgiving Day parade in Detroit that was sponsored by J.L. Hudson department store. I didn't get to see the parade in person until I was a high school senior but I watched it every year on TV when I was young.

Back in the day, the J.L. Hudson department store in downtown Detroit was every child's fantasy. The 12th floor always had the most fabulous Christmas display and most if not all of the floor was designed for children. Santa Claus was there, along with his elves. Parents and children would stand in line to have a few moments with Santa and to get their picture taken. 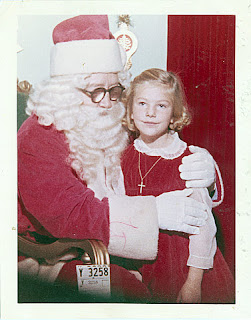 Here's me with Santa at Hudsons. Christmas 1962.

In 1964 the nine-story Christmas tree of lights went up the side ot the building. It was 125 feet tall with 72,000 starburst lights that invited shoppers to join the Christmas spirit inside. For most Detroiters who grew up in that era, the 'real' Santa was at Hudson's. The store's Christmas decorations sparkled and delighted everyone. The outside windows featured animated displays from fairy tales to outer space.

In honor of the dawn of the space age in the 1960s, Santa's helpers put on space suits. The 12th floor fantasy area entertained the long lines of excited children and their parents, who received photo keepsakes of their tots on Santa's lap. Little did they know that there were several Santas working together to keep the lines moving.

Perfection was never good enough. The Christmas decorations were new each year. Out of sight from the customers, the old decorations were smashed at the end of each season. It was cheaper to destroy them than to store them. [More]

On the 12th floor of Hudson's, parents and children would wander around to view the many elaborate Christmas displays, some which were animated. I can remember my own wide-eyed wonder at seeing lifelike animals, dancing snowflakes, an arctic pond with skating penguins, and glitter and sparkle everywhere!

In addition to visiting Santa and seeing all the displays, kids could also shop in a special section of the store designated as the "For Kids Only Shop". I can remember going in there to shop on my own for the very first time. It was so exciting! I remember looking around and wishing I had more money and that they had better stuff. It seemed like an a lot of junk to me but I just had to buy something! I wish I could remember what I bought. I don't. But I remember the experience and how grown up I felt shopping on my own. They even gift wrapped my presents for me!

Even though Hudson's delighted Detroiters by going all out for Christmas every year I can only remember visiting it the one time. I was six years old, in the first grade. It wasn't the only time I would visit with Santa, just the only time I visited Santa at Hudson's. I also remember visiting Santa at Crowley's and Muirhead's department stores in Dearborn. But I didn't get my picture taken then.

I was always nervous when I saw Santa and one time I forgot to tell him some of the things I wanted. Then I was so distraught afterwards and I worried myself sick that he wouldn't bring me that toy that I just had to have. After that year, my mom got smart. She would sit down with me and write up a list of the things I wanted before we went to visit Santa. Then all I had to do was remember to give him the list and I could relax and enjoy Christmas!

tape it to my bedroom door from Thanksgiving until Christmas. I wanted to make sure that anyone who was interested would have easy access to it ;-)

I still believe in Santa Claus, I still make Christmas lists, and I even visit with the old guy now and then. Here's a more recent picture of me with Santa. This one was taken about 10 years ago at the Fox Theater in Detroit. I believe we'd gone there to see the Radio City Christmas Spectacular show.

Now my relatives in Poland will celebrate Sw Mikolaj Day today. December 6th is the day that Sw Mikolaj brings presents to all the children, not on Christmas. They do get some gifts from family members and the Christmas Angel on Christmas but Sw Mikolaj definitely comes on December 6th. When Sw Mikolaj leaves his presents he also leaves a birch branch to remind the children to behave or they will "feel the switch"! This is done in jest and not taken seriously. It's a kin to receiving coal in one's stocking.

In honor of St. Nicholas Day and Sw. Mikolaj Dzien, I have information on a free digital scrapbooking kit called Kit St. Nicholas on my Creative Genealogy blog. You can also see a page I created with the kit there as well.

[The Advent calendar number graphic used in this post was created by NicNic at the NBK blog.]
Posted by Jasia at 12:21 AM