A Tribute To My Maternal Ancestors, Part 2

Once you come to the end of your document-dependent genealogy (as far as written records can take you), you have to reach into your genealogist's tool box to come up with a different set of tools to look at your deep ancestry. As most of my readers know, I took an mtDNA test a while back and ever since then I've been on a mission to discover what is known about my before-there-were-records ancestry. The test results I received didn't spell out anything for me in terms of my personal ancestry. But I've been reading extensively and spending lots of time doing online searches for information and I think I've come up with an interesting theory about The Ladies Pałka who lived before there were documents to validate them.

In Part 1 of this tribute to my maternal ancestors I introduced you to 6 of The Ladies Pałka, ending with Małgorzata who was born in the mid 1700s in Wojnicz, Poland. In fact, you may have noticed that with the exception of my mother who was born here in the U.S., all of the other 5 Ladies were born in Wojnicz, Poland. As it turns out, Wojnicz has been around for a very long time. While it's possible that Małgorzata was the first in her family to live in Wojnicz, it's also very likely that she was not. Take a look at a segment of the time line of Wojnicz's history from Wikipedia (translated the best I could).

4000– 1700 b.c. - Temporary colonization
1700– 700 b.c. - Abiding, but not continuous colonization
700– 400 b.c. - Not abiding lusatian colonization
X Century - Settlement by the knights of the body-guard of first Polish rulers. Raised embankments will became the city.
1109 - Church built called Św. Wawrzyńca
1239 - Visited by Kinga, The daughter of the King of Hungary, Bels IV, Future wife of Bolesława Shy. Wojnicz probably then received Municipal rights.
1278 - First reference about Wojnicz as municipality. The building up of municipal embankments.
1349 - City's Magdeburg rights taken By Kazimierz the Great
1379 - First fire noted in sources annihilates city
1381 - Confirmation Municipal rights By Hungarian Ludwig. Wojnicz becomes habitat and Administrative district. Parochial school arises.
1427 - Confirmation of the charters of townsmen by Wladyslaw Jagiełłę
1465 - The parish was assigned a church leader. He raised schools to the collegiate level, rebuilt the parochial church Św. Wawrzyńca in the Gothic style.
1485 - City annihilated by second fire
1503 - Approval by regional council of Laudum Wojnicz
1527 - The permission delivered by Zygmunt the Long-standing on the formation of first bridge over the Dunajec river by townsmen
1530 - Establishment of the Great Guild after consent from Zygmunt Long-standing
1575 - First confirmation of a brick town-hall in market square, with tower, bell and clock
3 October 1655 - Battle between Polish and Swedish armies
19 March 1657 - Rakoczi's armies appear in the city
1702 - Swedish mercenary cavalrymen blockade city because the townsmen refuse to make their contributory payment to the Swedes.
1732 - The appropriation of the incomes of city by the foreman of Jakub Karwowskiego
1739 - Large brewery is built in the area
1751 - Creating of extensive archdeaconship of Wojnicz

Here in the mid 1700s is where I left off with Małgorzata. So you can see that it is very possible that my maternal line continued back in this same town for a very long time. What makes me think they may have? That's where the mtDNA testing comes in.

My mtDNA test results indicated that I am in haplogroup H, likely in subclade H11. So what is known about haplogroup H?

The very first of The Ladies Pałka, "Helena", was born about 20,000 years ago on the strip of land that joins France and Spain, near what is now Perpignan. Helena's family arrived in Europe from the Middle East and not long after she was born, the glaciers that covered much of Europe began to gradually recede. Some of her clan moved to the lands of the Basque, where they are found to this day. Other of her children took advantage of the fertile soil and abundant wildlife in the wake of the receding glaciers and journeyed northwards. We know that they reached England around 12,000 years ago because DNA recovered from a skeleton found in Somerset shows that he too belonged to haplogroup H. (This would have been one of my really, really great uncles ;-)

If the journey to England took less than or equal to 8,000 years, say 6,000 years, (my really great uncle could have been there for a couple thousand years without leaving any evidence) and adding another 8,000 years for the additional distance to Wojnicz, Poland, you end up with one of The Ladies Pałka arriving in Wojnicz roughly 6,000 ago. Now take a look at the beginning of the history of Wojnicz time line again. Bingo! The Ladies Pałka could have arrived in Wojnicz 4,000 b.c. and lived there until the first written records of Małgorzata Pałka! 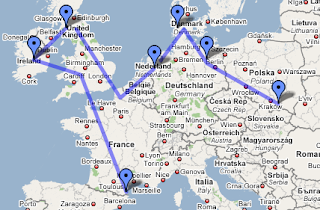 The map above shows a possible travel route starting with Perpignan, France and then going on to the areas where I have found people with exact matches for my mtDNA results. (See my findings on this post.) I've also added in Denmark because there is a high concentration of hg H there, see this article and these maps (Geographical locations of populations surveyed for haplogroup H (top) and it's spacial frequency distribution (bottom).) from this article.

Of course it's also possible that The Ladies Pałka were not founding members of the Wojnicz area. Perhaps they arrived at a later point in the city's history. But it's exciting to think that we may be just one newly discovered skeleton away from firming up this theory. Once we get to the point where there are no more documents we have to depend on digging up actual bones for evidence. Elizabeth Shown Mills may one day have to rewrite her book on evidence to accommodate physical artifacts and DNA results.

Of course this is all a lot of theory based on very little fact. But isn't that the same way we all approach our genealogy research? Don't we all start out knowing grandma's maiden name and trying to prove we're related to royalty? ;-) The truth is, this could very well be my family history, just the way it's written. I know that hard core skeptics won't cut me much slack on this one so I'll have to continue my search for evidence to prove my theory. But hey, that's the key to our genealogy addiction isn't it? ... Ever in search of more evidence!

So here's to The Ladies Pałka... going back 20,000 years. You've given me a family tree to be proud of. This month we celebrate Women's History Month and I celebrate you, the women who make up the history of my family... 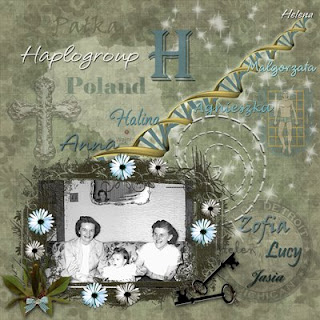 This scrapbook page shows the only 3-generation photo I have of my maternal ancestors. The photo was taken in 1957 and shows me between my mother (right) and her sister (left) who are seated on the couch at my maternal grandmother's house in Detroit. My grandmother appears in the mirror above the couch, she was sitting across the room.

Mitosearch.org [http://www.mitosearch.org/] which has a public database of mtDNA results.

Clan Helena Home Page [http://www.olypen.com/amelia/helena/]. This site has some good information, unfortunately it hasn't been updated since 2004.

Sykes, Bryan. The Seven Daughters of Eve. New York: W.W. Norton & Co., 2001. My review of this book can be found at [http://haplogrouph.blogspot.com/2008/03/book-review-seven-daughters-of-eve.html]

Part 1 of A Tribute to My Maternal Ancestors
Posted by Jasia at 5:19 PM