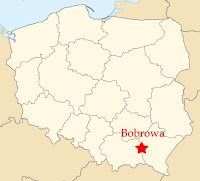 My great grandparents, Szymon and Ludwika LIPA, as well as several generations of my ancestors before them, lived in the small village of Bobrowa, Poland before immigrating to the U.S. in 1881. Now when I say they lived in a "small village", I mean small! At the time they immigrated, Bobrowa had a population of about 943 people. The village consisted of 3450 acres, of which roughly 2770 acres were farm land. There were 176 houses. 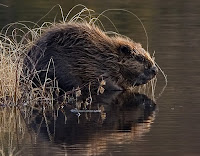 "Bobrowa" is the Polish word for beaver. The village was named for the abundance of beaver that inhabited the rivers that run through and around it. In medieval Poland beavers were highly valued so this is an honorary name of sorts. The village is located in southern Poland northeast of Tarnów. Bobrowa doesn't have a city coat of arms of its own but it is in the administrative district of Żyraków which has the coat of arms shown below. 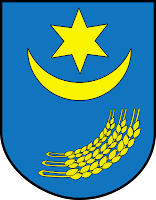 Bobrowa has a history that starts long before my great grandparents lived there. In fact, there is evidence of man's presence in the area of the Sandomierski Valley from the Paleolithic Period (12,000 to 8,000 B.C.) and from the Mesolythic Period (8,000-3,500 B.C.). Forests in the area provided game and the Skołodzierski and Wisłoki rivers provided fish to early man who lived there. There have been tools found in the area dating back to 1700 - 4500 years ago as well. This was the period when grains and plants were first cultivated and so too began the raising of cattle, sheep, goats and hogs. Colonization spread along waterways in the valley. Together with a network of settlements arose knight's villages and churches. 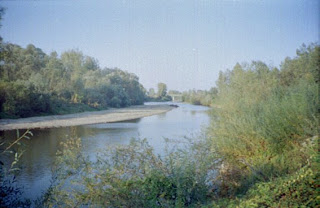 At the time of Kazimierz the Great (1341-1345) the area became a frontier zone between Poland and Russia and a considerable defensive system of castles and watch-towers were built. In that period the nearby villages of Żyraków, Gory Motyczna, Wiewiórka, and Zasów, all began. Bobrowa itself also began in the 1300s along with neighboring Nagoszyn, Korzeniów, and Wola Żyrakówska. 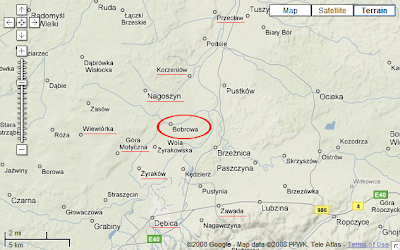 In the beginning, Bobrowa was not an independent settlement but rather a colony of Przecław and a part of the Przecław parish. Early records are sparse but by 1536 Bobrowa was noted as having 8 corn fields (each about 30 acres), 2 inns, 2 farmers, and 2 tenant farmers. There were 9 houses in Bobrowa at that time (presumably the other residents worked the fields but were not land owners).

In the 1600s the country of Poland was invaded by the Swedish army. A resistance movement was organized in one of Bobrowa's neighboring villages. When in 1656 the army approached the river, the peasants put up a fierce battle on the river banks and in the surrounding forests. In spite of the peasants' heroic efforts the area was devastated. It suffered devastation again in 1772 and 1774 when great floods washed out the cultivated fields and houses.

But in spite of the all the tragic events at Bobrowa, the community continued. In 1846 the peasant revolt throughout Poland resulted in the peasants being set free. But like the freed slaves in the U.S. after the Civil War, they didn't really know how to manage their money (barter), their time, or their crops. It took a long time before they knew anything of prosperity. Count Raczyński owned the manorial house in the area.

In 1860 the first ovens and chimneys appeared in the peasants houses and some farmers built corn grainaries. By the 1860-1870 time frame there were 176 families in Bobrowa and Wola Bobrowa. That amounted to 810 residents of which about 133 were members of the landholding gentry and their staff who occupied the local manor house.

In 1831, 1848, and twice in 1873 the residents of Bobrowa were hit by cholera epidemics. In 1873 the epidemic hit first during harvest time when some 40 people died and later in the fall another 10 people lost their lives to the disease. The dead were buried in a separate cemetery located between Bobrowa and Wola Bobrowa on the road to Przecław. During the epidemic, not knowing where to turn for help, residents walked to the Sanctuary of Makti Boźej (Virgin Mary) in Zawada to pray to Mary for help. Ever since then residents of Bobrowa and Nagoszyn walk a pilgrimage to Zawada the first Sunday of May each year. 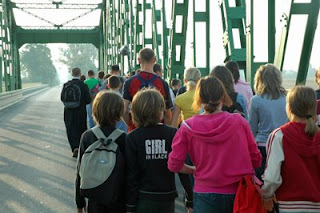 Rural education began in the area in the 1800s. Before that time all peasants were illiterate. In the countryside darkness ruled. People held superstitious beliefs and feared evil spirits. Estate owners were the first to encourage education for the peasants. Konopkow, owner of an estate at Nagoszyn, built a school in 1842. Young children from Bobrowa attended class there as well (older children didn't typically attend school as they were needed to work in the fields). Bobrowa did not have it's own school until 1884 (after my great grandparents emigrated).

Below is a photo of the "new" church that was built in Przecław in 1884, just after my great grandparents left the area. There was a previous church on the site which is the one my great grandparents would have been baptized and married in. However, records show it was starting to have structural problems and as early as 1850 plans were drawn up to repair and remodel the church. In the end, it was deemed impractical so the old church was raised and this new church was built in its stead. It has had major renovations over the years but still stands in the village of Przecław. In 1903 Bobrowa was joined with the parish in Nagoszyn separating it from the parish in Przecław. It remains a part of the Nagoszyn parish to this day. 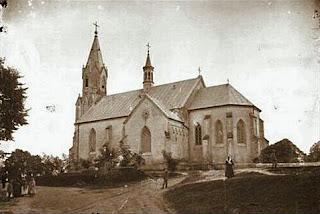 The year of 1914 was a banner year for the farmers in Bobrowa and the surrounding area. Nature's elements combined to produce an over abundance of grains of every type and potatoes, as well as cattle and other livestock. The people took it as a blessing. Then on the eve of WWI they received a mobilization order. Reservists, their wives and families prepared to march out and the soldiers left their little village with heavy hearts. But everyone believed that the war would be short-lived and that Poland would prevail.

Meanwhile, the Russian army grew ever closer to Bobrowa. The residents became fearful. People stockpiled food and clothing and buried it in boxes underground. When the Russian army reached the borders of the official administration district of Ropczyce they conscripted everything they could get their hands on. Cattle, horses, oats, clothing, boots, etc. were all taken from the people in the area. A first they tried to defend themselves along the Wisłoki river and engaged in a 5-day battle accompanied by residents from the surrounding area. But their efforts were not successful. In May of 1915 the Russians engaged the Austrian-German army in a fierce battle that resulted in many of the houses being burned. Villagers had to flee. All men from the age of 18 to 50 were conscripted into the army... which one I'm not sure. The Austrian army won the battle and looted many valuables from the local people. In 1918 as the war ended the armies finally dispersed.

Eventually the people of Bobrowa rebuilt their houses although some of them resettled in other areas, Podole in particular. By 1929 the population of Bobrowa was up to 948. It was about this time that the "Klub Ludowy" was built. Originally it was a hall, a meeting place of sorts, and a place to stage theatrical plays. 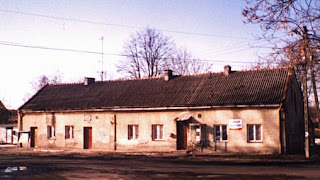 In 1939 WWII erupted and German planes passed regularly over nearby Dębica. The young men of Bobrowa gathered in groups and went off to join the army. Meanwhile the German army overtook the Polish army in one battle after another. The war raged on in the Sandomierski Valley through 1943 and 1944. Residents were displaced from their homes and had to live off the land, wintering in the local forests. They suffered extreme poverty and famine. It wasn't until the offensive ended midway through 1945 that people began to return to their own houses.

Following the war, Dębica grew as an industrial city and Bobrowa (only 5 miles away) benefited from the growth of it's neighbor. Farming continued to be the primary occupation in Bobrowa proper and to this day it remains a rural community. The population of Bobrowa grew to 1451 by the year 2001.

My ancestors who lived in Bobrowa were all farmers, which is not surprising given the fertile land and lush forests that make up the Sandomeirzski Valley of southern Poland where they lived. Interestingly, when my great grandparents came to the U.S. they became city dwellers in Detroit, Michigan. Oh they likely had a backyard garden and may have shared in working the land of local community gardens but they chose to live their lives out in the growing metropolis that was turn of the century Detroit rather than establish themselves in a farming community. I'm guessing the choice had to do with readily available employment opportunities. But oh how I wish I could ask them why! 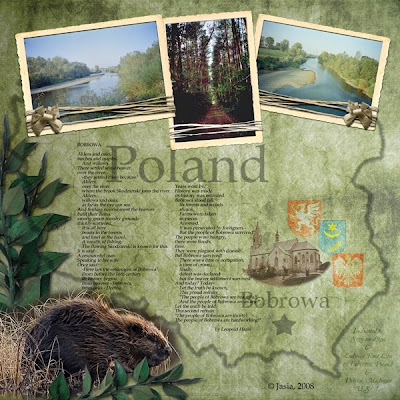 Comment:
It is truly amazing to me that I was able to research and write this article on the very small village of Bobrowa, Poland. I credit it entirely to today's technology. If it weren't for websites and an online translator I could not possibly have done it. When I sit back and read what I wrote and look at the pictures I am truly awed! If anyone reading this should find errors please leave a comment indicating such. I did my best to interpret the information generated by the online translator and I am fairly confident that it is accurate. But there is always the possibility of error.
Posted by Jasia at 1:31 AM