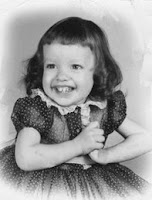 There's good news for those of us who are fans of Terry Snyder, the Desktop Genealogist! Terry, who is a frequent contributor to the Carnival of Genealogy and has famous toes, now has her own blog with an RSS feed :-)

Terry's new blog, aptly named "Desktop Genealogist Unplugged", is an archive of previously written articles that have appeared on The News-Messenger (of Freemont, Ohio) Newspaper website. She'll be updating her new blog each month with her previously posted articles. For her new content you'll still need to visit her weblog, Desktop Genealogist, at The News-Messenger Online.

I know I've missed some of Terry's articles because there is no RSS feed available for her Desktop Genealogist blog. If you've missed some too, head on over to her archive blog and get yourself caught up!

Isn't this an adorable picture of Terry? I was going to display the picture of her famous toes but decided she probably rather be thought of this way than that ;-)
Posted by Jasia at 12:29 PM