When you don't have a sister and you're best friends with someone else who doesn't have a sister your relationship can become a sisterhood of sorts. That's the way it was for Valerie and I. We were the best of friends all through middle school and high school. Inseparable.

After graduation, life took us on different paths. I went off to college in Ann Arbor, Michigan and she and her family moved to California. Needless to say we missed each other desperately and kept in touch mostly by letters. We both got married 3 years later, one week apart.

Val and I both had daughters, her daughter Laine was born one year before my daughter Leigh. I have pictures of the toddlers together when she came for a visit to Michigan. And pictures of them together again when we visited them on their horse farm in Virginia. Val always loved horses and is a talented rider. Her daughter inherited her love for horses and her talent as well. I've followed Val and Laine's riding careers over the years with awe and admiration. Both mother and daughter compete in eventing and have a very impressive stable of horses.

As time went by, Laine developed into one heck of a rider. So much so that she began competing at the highest levels of competition. Her main ride was a horse named Eight Saint James Place, "Jamie" for short. Her next main ride was Frodo Baggins, a New Zealand bred horse that actually starred as the dark horse in the first Lord of the Rings movie which was filmed in New Zealand. She rode lots of other horses as well, but these were the two she rode most in competition.

Then early last year Jamie died suddenly at the end of a cross country event. He wasn't old and hadn't shown any signs of health problems. Just one of those things I guess. Needless to say it broke Laine and Val's hearts. Riding develops a human/animal bond like no other. Especially in eventing where both the horse and rider depend on each other and have to communicate with their own special language.

Laine grieved for months but went on with her riding. She and Frodo more or less picked up where she and Jamie left off, trying to polish and tune their own rhythm and language. Then, the most wonderful thing happened! Last summer Laine was invited to join a group of equestrians and their horses on the prelim trip to checkout the venue for the 2008 summer Olympics in Beijing! Val asked me to create a web site for Laine, which I quickly threw together. Then they sent me updates every day as they made the trip half way around the world, competed in an international competition, and came back. I posted it all on Laine's blog. A few months later Laine and Frodo were on the short list to compete in this summer's Olympics!

Laine and Frodo have had a very good year. A few months ago Laine picked up another ride, a horse named Mazetto that she doesn't own but is riding for someone else. Fast forward to this weekend and Laine, at the ripe old age of 24, is riding not one but two horses in the Rolex 3-Day Event at the Kentucky Horse Park in Lexington, KY... the premiere event for U.S. equestrian riders. I have never had the opportunity to see Laine ride in competition and briefly considered making the trip to KY to see her compete in this event. Unfortunately, I just couldn't work it out.

This afternoon I went to the Rolex 3-Day web site to check the scoreboard and discovered that I could purchase a live feed to watch the competition! I whipped out my AmEx card and voila! I had my chance to see Laine ride!

By the time I tuned into the broadcast, rider #49 was on the course and #50 was at the starting line for the cross country event. Laine was rider #3 on Mazetto and had already ridden him earlier in the day. But she was also #55 on Frodo Baggins and would be coming up in just a few minutes! I watched one rider after another go over what looked like an impossible course. One rider fell off her horse but was able to walk off the course with no apparent injuries. Every time one of the horses went for a jump I caught my breath until both horse and rider landed safely on the other side. Finally they announced Laine's name and the camera cut to her at the starting gate.

It's hard for me to find the words to tell you just how exciting it was to see Laine burst across the starting line at a full gallop. In just a few strides she and Frodo approached the first jump. My heart was beating so hard and so fast as I watched them gather themselves and take that first jump... and then then exhale with relief when they landed safely on the other side. I've watched my share of equestrian events over the years but I tell ya, it's ever so much more intense an experience when you know the rider!!!

Then the camera cut to the rider who had started the course just before Laine and was already half way through the course. I found myself yelling at my monitor, "Cut back to Lainey! Cut back to Lainey!" A minute (that felt like an hour) later the camera did. It caught Laine and Frodo going full speed towards a jump that could only be described as an Easter basket with flowers planted in it. I held my breath as Laine and Frodo soared off the ground and through the air. And then Frodo's front legs clipped the jump sending him somersaulting through space. Laine was thrown clear of him and as her body crumpled to the ground like a rag doll my own scream pierced the air, followed by the kind of instant sobbing that only a traumatic event can bring on. My son came running. My husband too.

The camera cut away instantly going to the rider who was finishing the course and then the next one starting the course. I kept sobbing and waiting for the camera to go back to Lainey but it never did. After a couple of minutes the rider behind Lainey was held up and the competition was suspended. I waited. And I waited. Fearing the worst and knowing that she didn't get up and walk away.

The competition finally resumed over an hour later. The announcers gave very little information about Laine except to say that a doctor on the scene reported that she was conscious as she was airlifted by helicopter to a nearby hospital. Frodo, who was initially able to stand up after the fall, had fallen back down, had to be intubated on the spot and was then taken by equine ambulance for further treatment.

I've been in a state of high anxiety and worry all evening (this happened 3:30-3:45pm this afternoon). I've been checking the blogs and local news sites for information. There's little to be found. From the Kentucky.com site:

Rolex officials said [Laine] Ashker was in stable condition at the University of Kentucky Hospital and was conscious and able to move her extremities.

[Laine] Ashker fell at the 5th jump, a relatively straightforward obstacle known as the Flower Basket. Jumping at a high speed, her horse, Frodo Baggins, apparently caught his front feet on the fence, causing it to flip over, slamming himself and his rider on the ground.

I'm grateful to know that Laine survived which of course was my first and worst fear. It was such a horrific fall! Memories of the injury Christopher Reeve suffered that left him a paraplegic went through my mind and filled me with fear. But initial reports seem to indicate that Laine can move her extremities. That has to be encouraging. Still, If anyone has a prayer or two to spare I'd sure appreciate it if you could send them Laine, Frodo, and Val's way.

From the USEventing.com blog, here are pictures of Laine competing Friday in dressage: 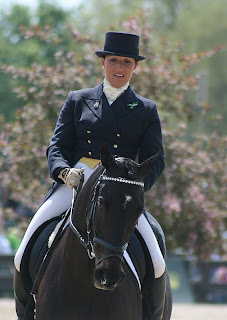 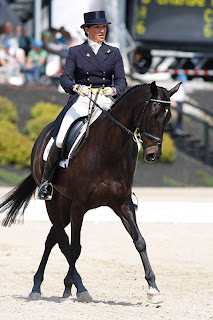 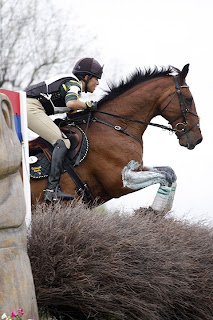 Tonight I'm thinking of my friend Valerie, the sister I never had, as she sits at the bedside of her daughter in a hospital hundreds of miles away. And I'm thinking of the web site I worked so hard on the past couple of weeks. It's a new web site for Lainey, featuring her eventing. I tried but couldn't get it done before they left for the Rolex competition. I don't think they've had a chance to see it (I can't give you the link because it hasn't been approved by them yet). Perhaps it will cheer them up when they do.
Posted by Jasia at 11:43 PM