Is the High Cost of Fuel Effecting Your Genealogy Research?

Almost every day on the news we hear another story about the high cost of fuel and how it is impacting our lives. Just this morning on CNN they reported that American Airlines, who a while back announced a surcharge of $25 for each passenger's second checked bag, has now announced an additional surcharge of $15 for the first checked bag. Experts say the other airlines may well follow suit as they scramble to cope with rising fuel costs.

Today the cost of a barrel of crude oil hit its 15th high this year. Overnight the gas stations in the metro Detroit area have pretty much all gone to about $4.00/gallon for the Memorial Day holiday weekend, the traditional start to the summer vacation season. One station by Metro Airport has a price of $4.35 for regular unleaded. In my suburban community a quick check of 28 gas stations within the city limits indicate all are currently charging $3.89-$3.95 for a gallon of regular unleaded. I understand Jim Cramer, a well known financial guru, has predicted that gasoline will be priced in the $5.00-$6.00 range by the end of summer. Yes, the end of this summer. Sobering isn't it?

And just a few minutes ago CNN reported that Ford Motor Company announced that they are cutting back production and they will not meet their profitability goal for 2009. They are now saying that maybe the company will be profitable in 2010. The company is confirming what many of us (around Motown at least) have known for a while now. The bottom has dropped out of the truck and suv markets (their most profitable vehicles) due to a complete and abrupt change in the buying preferences of consumers. It seems consumers have developed a preference for fuel efficient vehicles over gas guzzling monster trucks. Go figure. ;-)

All this talk about escalating prices for air fare and gasoline got me to wondering what impact the high prices might be having on people's genealogy research. Has anyone decided to cancel a planned research trip because of high fuel costs? Decided to drive instead of fly to a destination? Thought about taking Amtrak instead of driving or flying? Have you considered paying to order records that you would have copied/photographed on location yourself to save the cost of gasoline? Have you had to cut back on any genealogy subscriptions or memberships because the cost of putting gas in your car for normal family functions is eating away at your hobby funds? Will you be attending fewer or closer genealogical society meetings because of transportation costs to get there? Are you skipping the family reunion this year because you can't afford to get there?

On the other hand, some people may be spending more time and money on their genealogy hobby because they are opting for that instead of pursuing other of their more expensive hobbies ( i.e. long distance travel, golfing (...have you seen the prices for 18 holes these days? Yeesh!), boating (... marine fuel is often higher than gas for your car)). Genealogy can be a bargain compared to some of those.

For myself, I know I will be staying closer to home as I write my family history this summer. In the past I've enjoyed driving out to a park, preferably a nice wooded area, to write. I find that being "in nature" gives me a fresh perspective and allows me to leave thoughts of household chores, bills, etc. behind. My writing is better when I do it outdoors, I think. But this summer, I'll be looking for those "in nature" spots closer to home. I drive an suv but it's not a big one and it gets pretty good gas mileage if I drive fuel-conservation-responsibly... 20 mpg city/ 25 mpg highway (@ 70 mph). Any research I need to do will be relatively close to home (1.25 hour driving time tops) as my ancestors immigrated to this immediate area and stayed here.

Let's face it. For most of us genealogy is a hobby. And when household finances get squeezed, well, the hobby funds are likely to be effected in the first round of cuts. I'd be interested to know how the high costs of fuel are effecting your genealogy/family history hobby. Leave me a comment or if you write a blog post about it send me the link (imjasia at yahoo) and I'll create a list of links at the bottom of this post.

I'll leave you with a photo I took last weekend at the Henry Ford Museum. This is a re-creation of a typical gasoline service station from the 1940s. The fuel tanker parked at the pumps held about 1/3 of what the typical fuel tankers can carry nowadays. The price at the pump? Fifteen cents per gallon. Doesn't that just make you long for the "old days"? The lowest price I can personally remember seeing posted for gas when I was a kid was $.27/gal. How 'bout you? 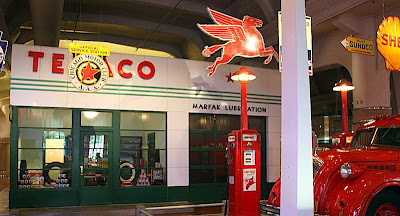 John blogged about this topic.
David did too.
Posted by Jasia at 9:42 AM