She Did It To Me Again!

She did it again. My mom that is. And I fell for it, again. When will I ever learn?

Remember a while back, I wrote about my first car and how my mom told me that my dad bought a Mustang and it turned out to be a Maverick? I should have known after that little episode that my mom wasn't very knowledgeable about car models. You'd think that would be a pretty obvious thing to keep in mind when discussing cars with my mom. But did I? No.

I went to the Henry Ford Museum this afternoon for my first of what I hope to be many photo shoots of my family's cars. They have some 300 vintage cars in their collection so I figured the odds were good that I'd find at least one or two.

The first car I was looking for was my father's first car, a 1949 Ford. I started off at the beginning of the row with the Ford Model Ts and made my way down the line, reading the information on the displays as I went. I didn't get far before I was looking at a Ford Model A. It looked familiar to me but I couldn't figure out why. I started reading the display information and was hit with a wave of, "OMG that's it! That's my grandfather's car!"

Here's the advertisement I saw...

But it couldn't be. My mom told me over and over again that her father's first car was a Model T. But I was staring right at an advertisement of my grandfather's car and it was for a 1929 Model A! Argggh! She got me again! LOL!

It's really not a big deal except that I have spent countless hours online trying to determine what year of Model T my grandfather owned and which model within the Model T family it was. I never could find one that looked just like the one picture I have of my grandfather's car. I figured he must have owned some obscure version of the Model T because none of the ones I found looked like his... similar, yes. But not the same. THAT'S BECAUSE IT WAS A MODEL A! LOL!

That one advertisement explained so much. Unfortunately, they didn't have the same version of Model A that my grandfather owned on display. As best as I can determine from hours of searching online when I got home, his was probably a 1928, 3-window Fordor sedan with a front slant window. I can't tell if it was the deluxe edition or the standard edition (I don't know what the difference was between the deluxe and standard editions).

The thing that makes me think it was a 1928 is something my mom once said (I know, I know, I have to be careful believing everything my mom said about cars... I got that now!). I'd asked her what model year her father's car was and she thought about it for a minute and said, "it was the first year with the rounded window in the back". I assumed she was referring to the rear window. When I met with a Model T expert a couple years ago at the Ford Centennial Celebration I asked him when the first Model T was made with a rounded rear window and he looked puzzled. He said the shape of the window went back and forth from year to year with the first rounded rear window model being made before my grandparents emigrated from Poland. I didn't know what to do with that.

As it turns out, the 1927 Model T Fordors had 3 side windows instead of the standard 2, and they were all squarish. However, the 1928 Model A Fordors had 3 side windows with the one closest to the back being definitely "rounded". So now I'm thinking it wasn't the rear window my mom was referring to but the back-most of the 3 side windows. So that was probably my misunderstanding of what she meant. Mom may not have gotten the Model right but she may well have gotten the "first rounded back window" part right. :-) Anyone want to buy a couple of Model T keys cheap? LOL!

Oh and by the way, I did find my father's first car... the 1949 Ford. They had it on display and on a vintage billboard. I wasn't able to find any other of my family's cars though. But I'm not discouraged! The summer season is just getting started and I'll have lots more opportunities to look for my family's vintage cars. 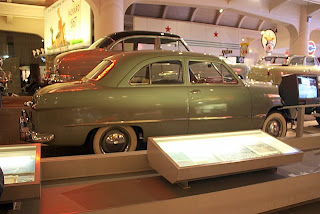 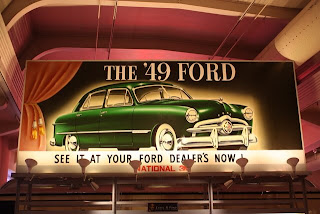