I've made my decision. I want to thank everyone who was kind enough to leave me a comment and send me email regarding my summer writing project: writing up a branch of my family history. I've decided to go with writing the history of my paternal grandparents, both of them. It's a big project to tackle both family lines at once but for me it just makes sense to do so. If it turns out to be a bad idea down the line I may change my mind. But for now, that's the plan I'm going with.

For those of you who haven't been following my blog for the last couple of years I'll explain a bit about where I'm at right now. I have previously written two historical fiction novels in the 2005 and 2006 NaNoWriMo competitions (NaNoWriMo= National Novel Writing Month). My 2005 novel was based on my maternal grandparents' lives in the west side Polish community of Detroit from the time they emigrated in 1912 and 1913 and into the 1940s. My 2006 novel was based on my paternal great grandparents' lives in the east side Polish community of Detroit during the mid 1880s. I really enjoyed writing these books and I learned a lot about the writing process as a result. 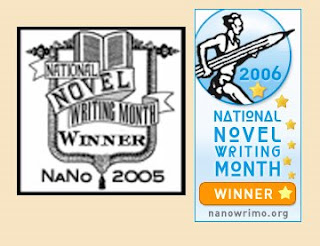 The main things I learned were:
Because I was so successful with the two novels I wrote using the write-a-novel-in-30-days format, I'm going to try to adapt a similar framework this summer with regards to writing my family history. It's an idea I first entertained back in January 2007. I have no idea if writing non-fiction is more time consuming than writing fiction or not because I've never done it before. But I figure, why not go with a process that I've been successful with in the past? So I'm going to give it a try. I'm hoping to have a plan, with a time frame, put together by the end of the week.

Thanks again for all the comments of support and advice. I really appreciate them! And I'm counting on all you guys to come through with more of the same as I wade into the mucky-bottom waters of writing my family history this summer. :-)
Posted by Jasia at 1:04 PM