A Most Unusual Pet

The crow was more or less adopted when it was found with broken wing. The family hand fed it and the children played with it. Six year old Dorothy preferred playing with her crow to playing with baby dolls and would often push it around in a baby carriage. She's pictured here with her sister and their crow. 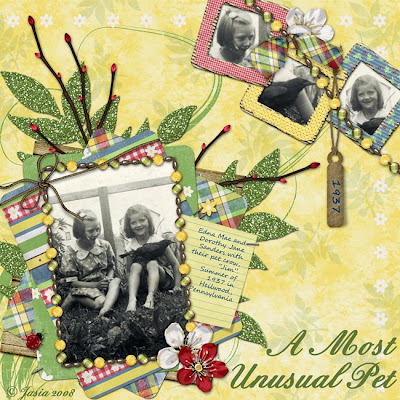 After a while, having the crow for a pet became a problem. You see, he liked to help himself to the goodies in the family garden. And that was just not acceptable. So one day William Sanders took the crow "out to the woods" and the kids never saw him again. But thanks to the wonders of photography, the story of Sanders family's most unusual pet lives on in pictures as well as words.

Scrapbook page is a quick page from the "Saturday in the Park" collection by Linda Walton of Bon Scrapatit Designs.
Posted by Jasia at 8:39 PM