Once upon a time, in the days of my youth, I had a dog like no other. To begin with, she had a name like no other... Penela Pooh Pooh Penela Cougar Poober Penn Noonie Poop. Now is that an original name, or what? Before I tell you all about Pennie the Wonder Dog, as I came to think of her, let me tell you about my life with pets before Pennie.

The fact that my mother didn't want any pets didn't stop my dad from bringing them home. Before I was born, my brothers had a blond cocker spaniel. I don't remember it's name. Then we had a beagle named Happy. There was a white bunny that I got for Easter one year... don't remember it's name either. When I was about 6 or 7 we got a chihuahua from my aunt who bred them. We named him Chico. He didn't last any longer than any of the other pets. My mom would carry on something awful when my dad came home with a pet. And you know how the story goes... when momma ain't happy, ain't nobody happy. So the pets didn't get to stay long.

We went a long period of time after Chico with no furry pets. I did get to keep the guppies, goldfish, and turtles that I won at school fairs... for the couple of months that they lived. But other than that, no pets for us.

I loved animals and constantly begged my mom for one (didn't have to make the case to my dad, he was on board with the idea). I wanted a horse since I was three years old, and every dog I ever saw. My mom was successful at brainwashing me with the "you can't trust cats" idea so I had no desire to own one of those until I was an adult. I knew I was never going to get a horse since we had no place to keep one. But I was relentless in my campaign to get a dog.

In the spring of 1970, a new girl moved into the neighborhood. Valerie moved into a house 4 blocks away from me and she not only had a dog, but a cat, 2 canaries, and a duck too! And... she took riding lessons every Saturday which meant she got to be around horses all the time!!! Valerie quickly became my new best friend. (Yes, this is the same Valerie who's daughter recently rode at the Rolex 3-Day Event.)

If there was ever a young person's version of a horse whisperer, dog whisperer, bird whisperer, etc. it was Val. She was a natural with animals and they responded to her like magic. I idolized her and wanted to be just like her. I wanted to take riding lessons and have a dog and birds too! You can imagine my mom's reaction to that idea.

Val opened up a whole world previously unknown to me. Besides getting to ride horses every week she spent a lot of time with her dog, Finnegan aka Finn. Finnegan was a collie and Val had trained him to do so many things I had never seen done before. He was almost like Lassie. Not only would he sit and stay and lay down but you could point your finger and say "go" and he would go in that direction. In fact, she had him trained to obey silent commands as well as verbal. So you didn't have to say anything at all! I was so impressed... just blown way. The more time I spent with Val and Finnegan the more determined I was to get dog. And not just any dog, I wanted a collie like Finn.

I stepped up my campaign promising my mother that I would do everything for my dog if I had one. I would feed it and clean up after it and bath it and she wouldn't have to do anything at all. Then I started reading the classified section of the Sunday newspaper looking every week for collie puppies. I'd go on and on about how well I'd train my dog, just like Val did. And I begged and I begged. My mom said she wasn't going to spend her hard earned money for another pet that would dirty up her house. So I said I'd buy the dog with my own money and keep him outside in the backyard not in the house. Finally, she gave in.

I didn't have the money to buy a purebred collie and no hope of earning enough in the near future. So when I found an ad for collie mixed breed puppies I figured I'd better settle for what I could get. The ones I found were priced at $5. I could afford that. My dad took me over that same day to see the litter. The owner said her bitch was a purebred collie but she'd been visited by "the phantom of the night" so she had no idea what other breeding the pups had. Most of the puppies didn't look anything like collies but a couple did. I picked the female who looked the most like a collie because my mom had instructed us not to bring another male dog home who would lift his leg on her rose bushes.

My mom didn't realize it, but letting me get this dog was probably the smartest thing she could have done. I was 13 at the time and way too boy-crazy for my own good. Val was way more interested in dogs and horses than in boys so she was a good distraction for me. Getting Pennie was even better. I forgot all about boys (mostly ;-) and spent all my free time training Pennie. And luck was with me because Pennie was a highly intelligent dog. She was very easy to train and in no time at all she'd learned the basics... sit, stay, come, lay down, sit up, speak, etc. Val and I would spend oodles of time "working" our dogs and have pretend dog shows. I learned a lot from Val and Pennie learned a lot from me.

I had never heard of obedience trials or agility competitions for dogs and since Pennie wasn't a purebred she couldn't have competed anyway. But that didn't stop me from training her on homemade obstacle courses. I taught her to jump obstacles, climb up and slide down on playground slides, fetch anything and take it anywhere, water retrieve, and do it all on silent command. After the first few weeks that I owned her I never had to put a leash on her again. We were a team.

When she was full grown, Pennie weighed 35 lbs. But she'd spent so much time with Finnegan when she was growing up and I was training her, she thought she was a collie, and a male one at that. She didn't urinate like female dogs do, she lifted her leg like she saw Finn do. Oh yeah, my mother loved that.

It wasn't long before Pennie could do everything that Finnegan could do. So then Val and I would spend hours trying to think up new tricks to teach our furry friends. They were our constant companions. They absolutely loved all the attention they got from us.

And yes, I did feed and clean up after my Pennie. I took my responsibilities seriously.

Of course Pennie wasn't a perfect pet. She had her issues. Training her to jump obstacles proved to be a bit problematic on Thursdays. You see, Thursdays were trash collection days. If I forgot to tie her up on Thursdays when I couldn't be with her she'd jump the fence and run around the neighborhood digging in people's trash. Sometimes we'd get a call from a neighbor, sometimes I'd have to go out looking for her, sometimes she'd come back on her own. But it was always worrisome for me when she was gone.

Pennie was a bit of tramp too. She had tendency to jump the fence when she was in heat and, well, you know how that story goes. The first litter of puppies my mom barely tolerated. The second litter of puppies came along just after I went away to college and quite frankly I think my mom was looking for a reason to get rid of Pennie. My dad had just died and my brothers were living on their own. I went away to school and there was no one but her to take care of Pennie. And she didn't want to be bothered. So when the 2nd litter of puppies came along my mom took Pennie and the puppies to the city pound. That's it. She was done with pet ownership. I was devastated.

Fortunately, my pet-loving brother heard about it and went to the pound and got her and her puppies back. Pennie lived at his house after that (for which I will always be grateful) and when the puppies were old enough they were given away. If it were up to my other brother I never would have seen Pennie again. He was a pet hater like my mom.

The following spring, Pennie ran away again on a Thursday. But this time we didn't get her back. I was still living on campus but my brother called all the local community dog pounds and put up fliers to no avail. I prefer to think that someone just took her in rather than think she might have been hit by a car. But I never saw her again after that. I looked for her for years afterwards though. Whenever I was driving through my brother's neighborhood I kept my eye out for her. She was still young when she disappeared, only 5 years old. So I didn't lose hope of finding her for a good 10 years.

So, you're probably wondering about the name... I liked Pennie's coloring. It reminded me of a copper penny. But Penny was too ordinary a name for what I just knew would be an extraordinary dog. So I made up a name that was sort of derived from a penny. I called her Penela (accent on the first syllable). And then the funniest thing happened. I started giving her all the love and affection that probably would have been directed at some boy if I hadn't gotten her. And you know how people in love have all those sappy pet names for each other... well, that's how Pennie ended up with her name. I just kept adding more sappy pet names to Penela and that's what I ended up with. I always called her Pennie when I wanted her to come. But when anyone asked me her name, I gave them an earful!

Here's a tribute to my girl Pennie: 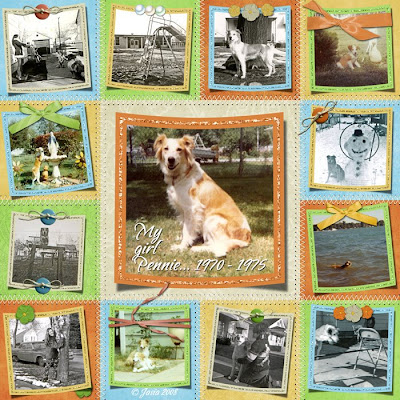 Let's see if I can run through a quick description of the border photos. Starting across the top:
Oh, and eventually I did rediscover boys ;-)
Posted by Jasia at 2:58 PM