The topic for the 45th Edition of the Carnival of Genealogy was Cars as Stars of Our Family History. That was back in April of this year. As I was researching the cars in my family for an article on the topic I discovered that I had very few photos of the cars my family owned. I had some success with finding photos of a few models on the internet but wasn't able to find good shots of every model. I decided at that time to make it my photo-mission over this summer season to find and photograph as many of those models as possible.

Last weekend was my first vintage car photo shoot of the season. I went to the Motor Muster at Greenfield Village, an annual event hosting vintage cars from the 1930s through the early 1970s. It was a photographer's dream event. The weather was sunny and hot. I spent 5.5 hours walking around the village, 4.5 hours spent photographing and the other hour spent having lunch and taking much needed breaks for liquid refreshment. It was a delightful day and I had a great time. I came away with over 300 photos, 272 of which were keepers. Most of the photos had nothing to do with cars my family owned, they were just great cars!

Having full sun was both a plus and a minus for shooting vintage cars. There's nothing like full sun to show off crisp reflections on all the chrome used on the cars of yesteryear. I love chrome! Hood ornaments, grills, side panel trim... it's all great stuff! However, full sun poses some challenges when shooting chrome as well, namely sun glare. Sometimes the place you have to stand to minimize a sun glare spot doesn't give you the best angle for the rest of what you're trying to capture. A polarizing filter would have been handy but I was shooting with a new lens that I haven't had a chance to get a polarizing filter for yet. So I made the best of what I had to work with and I have to say that overall I am very pleased with my results.

I thought I would treat you to a dozen of my favorite hood ornaments. I miss hood ornaments. How I wish more cars had them these days. I know from a couple people who have them that they are often stolen. How sad is that? I'd still like to have one on my SUV! Anyway, on with the show... 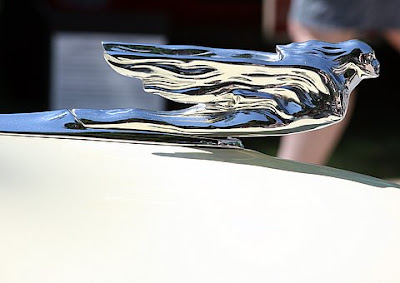 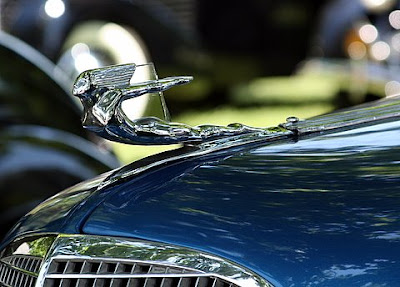 1937 Cadillac Fleetwood - Another beauty here! She too has long hair pulled back by the speed of the wind. No wings on this gal but her girlish figure is more emphasized along with the muscles of an athlete. 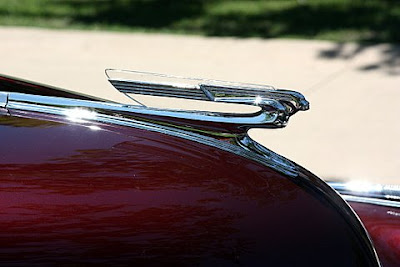 1941 Chevy - This lovely lady has a more futuristic look. The very long hair and well developed chest leave no doubt it's a lady we're looking at. But the more streamlined look to her body somewhat de-emphasizes her femininity. 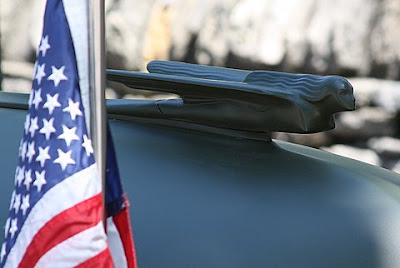 General's staff car, Cadillac, WWII era - When you're a general in the U.S. Army, you get to take your lady with you in to war ;-) This gal has long flowing hair and wings making her seem almost angelic but the strong lines and forward motion suggest action and strength. Just the image for the well appointed General's car! 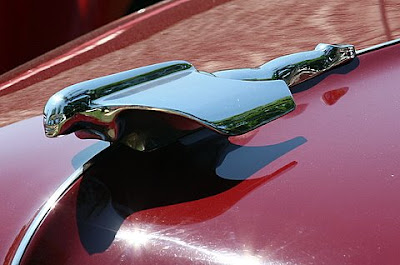 1950 Nash Ambassador - Now this image seems to be almost unisex. The wings could be those of an angel or a bird but contemporary in any case. 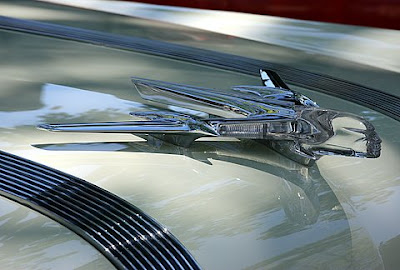 1955 Pontiac Starchief - Here we have a human morphing into a jet airplane. The suggestion here is definitely more of speed, strength, and power. The human face doesn't look very feminine at all. 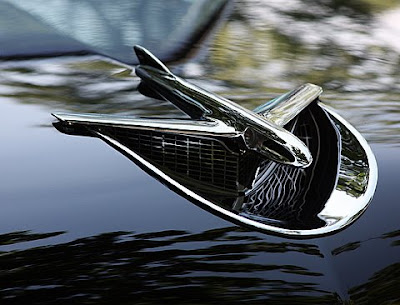 1956 Buick Roadmaster - With this image there is no connection to the human form at all. This one is all about speed and power. It's hard to reconcile the terms "speed" and "power" with a Buick Roadmaster though, isn't it? 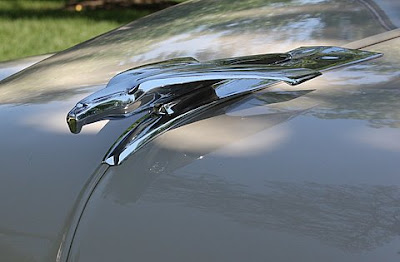 1953 Chevy - This bird looks eerily similar to my high school logo which was a Thunderbird, chosen in honor of the Ford car by the same name. Definitely about speed, agility, and power here. 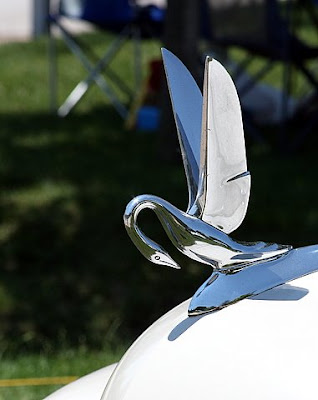 1949 Packard - Now here we have a bird of a different sort. This one conveys grace and beauty with no suggestion of speed or power. 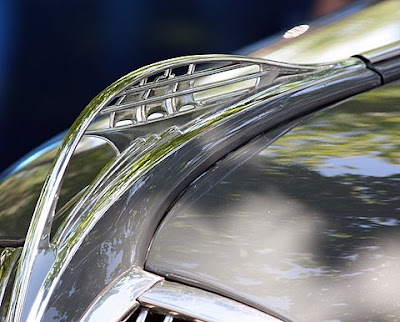 1937 Plymouth Convertible - I guess there was good reason to think of the old Plymouths as "boats" besides the fact that they drove like freighters. No suggestion of the feminine form here, nor speed or agility. I'm guessing the idea was to convey a sense of floating, probably a smooth ride. 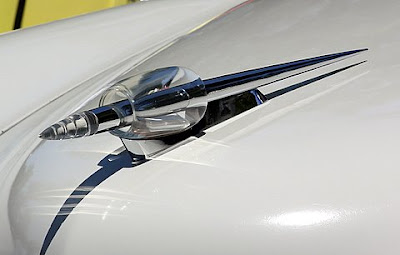 1951 Kaiser Dragon - Here's a doo dad for ya! It reminds me of a fountain pen but I'm thinking that's not the image that was intended. Probably it's supposed to be a bullet shooting out of a gun suggesting the car is as fast as a bullet. 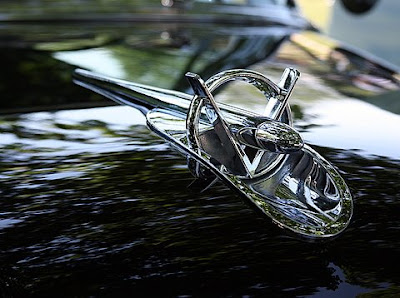 1953 Buick - Here we have another doo dad that looks like a bullet, this time with what seems to be a gun site or mount. Once again we're looking at an image that conveys speed, power, and accuracy.
These are only a few of the many hood ornaments I was able to photograph. And I have more than just hood ornaments too. Next time around I'll show you more vintage car chrome but from other areas of the vehicles.
Posted by Jasia at 2:36 PM