Have I mentioned how much I like the cars of yesteryear? Well, I love 'em! I think they have sooo much more character than the cars of today. There's so much to like about them, not the least of which is all that beautiful chrome that adorned them. I've already shown you some of my favorite hood ornaments. Now I'd like to share with you some the other chrome highlights on the vintage cars from this year's Motor Muster at Greenfield Village.

Let's start with grills. I could do an entire series on the front grills of cars from the 1930s-1970s but I'll try to contain my enthusiasm and limit my photos to just a few. Grills, after all, are only the "tip of the ice burg" so to speak. There's lots more chrome on the cars of yesteryear to be considered. Still, grills are often the first part of car that you see. So let's start there. 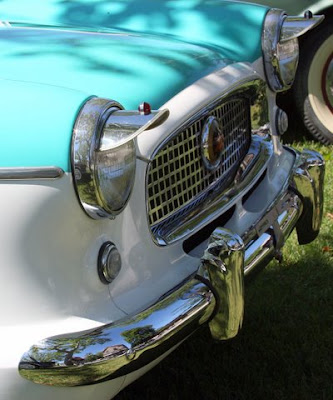 This one is a real cutie! It's a 1961 Metropolitan. Check out the bonnets over the headlamps (which are ringed in chrome too). They make the headlamps look like eyes with the bonnets giving the effect of eyelashes. Don't you just find yourself waiting for the bonnets to blink? Now this car has person-ality! 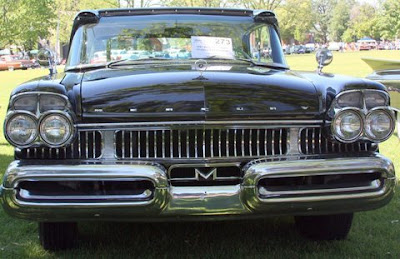 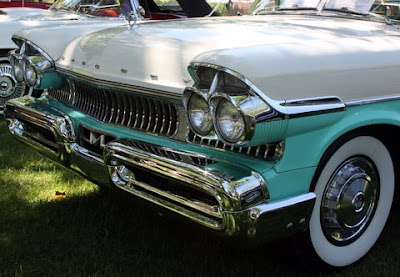 These next two beauties are 1957 Mercurys. The double set of chrome coated headlamps looks like a double set of eyes! But also check out the other chrome detailing on this baby. The solid wheel covers and massive bumpers grab your eye but if you study it a bit longer you begin to see the styling details that make this car a real work of art. There's the letter "M" in the center of the bumper and all those vertical lines above it that give the grill visual interest. The contrast of large bold sections and thin detailed elements with a double set of eyes looking back at you will capture your attention for sure. The styling detail seen here is so lacking in the cars of today. Before we move on, did you notice the third set of "eyes" staring at you from the roof line of the black Mercury? Sa-weeet! 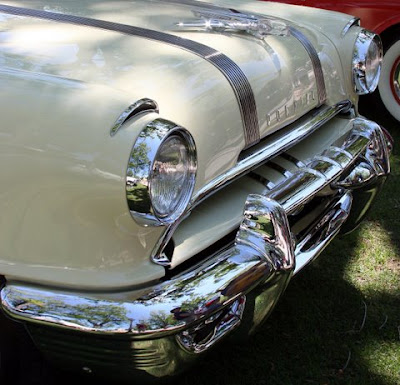 This car has facial expression in spades! It's a 1955 Pontiac Starchief. Notice the little chrome accents above the headlamps. Don't they remind you of eye brows? And what about that gaping hole above the bumper... doesn't it look like an open mouth? The massive chrome bumper looks like a strong jaw. All this car needs to complete the facial look is to drop that hood ornament down the front so it's pointing at the ground... wouldn't that make a perfect nose? 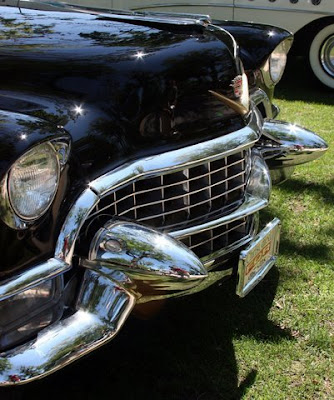 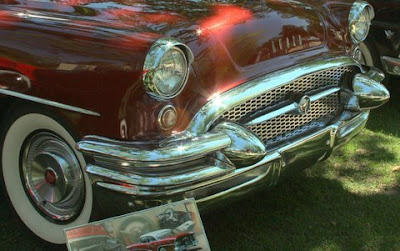 Pictures of these two cars would make for great conversation pieces in a psychotherapist's office. The black car is a 1935 Cadillac Eldorado, the red car is a 1955 Buick Special. What do you see when you look at the chrome styling? Aggressiveness? Anger? Sexual images? Class? Strength? Power? Faces? All of the above? My guess is that some days you'd see certain attributes, other days you'd see others, depending on your mood. A discussion would likely provide great insight into your mood and mindset. 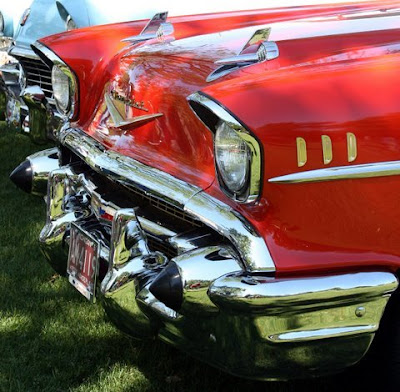 This model, a 1957 Chevrolet Bel Air, has very aggressive styling. The hood even has what looks like gun turrets on it! This car has attitude in spades! It says, "Get outta my way, buster! I mean business!" LOL! Some people say that the road rage that is so very prevalent on our streets these days has come about as a result of how stressful our society has become. I say it's always been there but it used to be expressed in vehicles instead of with vehicles. 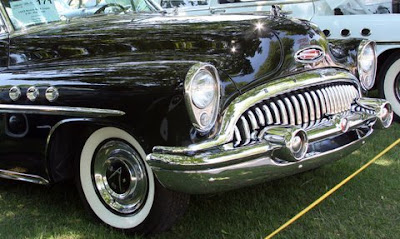 Contrast the previous three cars with this one. It's a 1953 Buick (a black version of Grandma Mazur's car that Stephanie Plum often gets stuck driving around Trenton ;-) . There's still massive amounts of chrome on the grill but the style lines are softer, not so much edginess. And check out the chrome port holes. They're filled in on the black car in the foreground but the same model in light blue in the background has port holes that look more like true "holes". Interesting, eh?

Moving on from grills... here we have a 1957 Olds 88. This car has lots of chrome detailing. Notice how the body is sculpted just above the door handle. Curving style lines are carved into the body and highlighted with chrome accents. The front windshield and rear window are also ringed in chrome. Remember vent windows? Only those who rode in cars before air conditioning became standard will remember playing with them to direct the most air flow for ideal comfort.

Look at the chrome on this 1955 Ford Fairlane Crown Victoria. It's placed all around this model and gives it a really deluxe look. You just don't see this kind of design in cars anymore and I'm not talking about the creative colors. There are very few visual accents to cars these days. Everything is streamlined to be sleek and fuel efficient. That may be practical given the price of gas these days but it takes the character right out of a car! 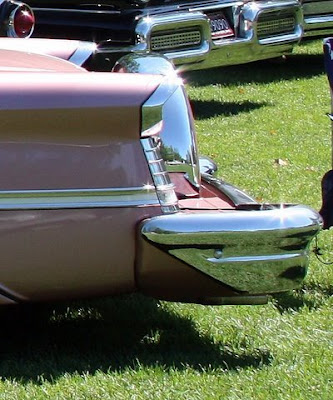 We'll wrap up with a look at chrome on the rear bumper. Here's the 1957 Olds 88 again. Look at the size of that rear bumper! This car is from the days when the length of a car was thought be a reflection of the length of man's private body part and the size of his wallet. And check out the spare tire cased in chrome! This car was made extra long with the addition of the exterior spare tire and an extended bumper. This set of wheels was for only for the well endowed man ;-) 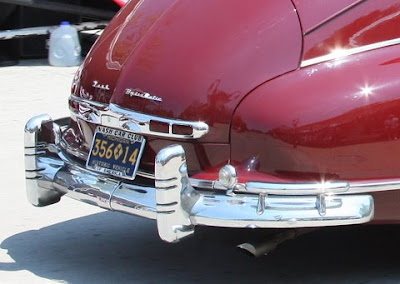 This is a 1950 Nash Ambassador Super. This model has great curve appeal, if you're in to that sort of thing. The chrome ending is both stylish and practical, limiting the amount of damage that might be done in a rear end crash. Rear bumpers were not typically given the same amount of attention to detail that front grills were but this one has very nice accents and lines.

That about wraps it up for the chrome show. If I can find the time, I'd like to showcase more of these fabulous vintage cars from the Motor Muster. Maybe I'll do a post on the creative colors on the cars of yesteryear. Anyone interested?
Posted by Jasia at 3:43 PM