Nothing stays the same. Not even my beloved Camp Dearborn. (You may remember I referred to it in a previous post.)

Yesterday was the 60th Anniversary celebration for Camp Dearborn and everyone was invited to visit. In spite of rather poor picture-taking weather I headed out to try to grab a few pictures of the place for old times sake. To the best of my recollection, it had been about 15 years since I was last there. Even then it had changed since the days of my childhood. But not like it's changed now.

The skies were overcast and the atmosphere was humid and hazy. Rain was in the forecast so I concentrated on taking my pictures quickly and moving on. I wanted to try to revisit all of the areas of the camp that I'd enjoyed "in the good old days".

Pulling into Camp I noticed a pretty new street sign for Camp Dearborn. It also mentioned Mystic Creek Golf Course (which wasn't there in the old days).

I stopped first at the Canteen just to make sure it was still there. The Canteen served hot dogs and hamburgers, fries and ice cream cones. The ice cream cones were always my favorite :-) It looked like the place had gotten a new coat of paint and some arcade games but other than that it seemed pretty much the same. The putt-putt course was gone though and so were the trampolines. :-(

The first change I noticed was the pond behind the Canteen. It used to have several fountains in it and on a windy day you'd get sprayed with a fine mist as you walked to the Canteen from the beach and picnic area. There was only one fountain head in it now and it wasn't working. It looked neglected and long forgotten. I felt a tinge of sadness for the pretty fountain but with rain threatening I couldn't afford to linger.

Next stop was the swimming beach. Whoa! I wasn't ready for what I found there. Desolation. There's no other word for it. Granted the day was forecast to have rain (only hit and miss showers not an all-day rain) but it was hazy, hot, and humid then. The beach was totally vacant except for 3 brave souls who ventured into to the water. I was struck by the fact that I'd never seen the beach that empty. The other thing that I noticed was that the bath houses were gone. Where do people change into their swim suits now that the bath houses are gone? And why are they gone? Isn't the beach popular anymore? The picnic area had only a few families setting up at the tables. I expected the place to be busy if not crowded. It was, after all, the Camp's 60th anniversary. Eerie.

The next dramatic change I noticed was the lakes. They were gone! Well, not all of the lakes but some of them. The water skiing lake was now the turf of the golf course and there were golf carts riding around where the ski boats used to cruise. Yeesh! And where did the fishing lake go? It looked like there was a bit of wetlands where the lake used to be but I don't think there was any way to access it. Huh. The whole vista had a surreal feel to it. Naked. Lonely. Abandoned (except for golf carts).

I couldn't wait to leave the area. I felt so sad looking at the barren beach and the missing lakes. This didn't feel like my Camp Dearborn at all.

Next I went up towards the Chalet and passed the new miniature golf course and the club house for the Mystic Creek Golf Course on the way. They were both well attended. I guess that's what people want to be doing these day. Golf.

Passing the Chalet I looked down on the paddle boat lake. Thank goodness it was still there but the Mark Twain "tour boat" was all closed up. There were a couple of kids out on the paddle boats but mostly the area was quiet. Up on the hill people were decorating the pavilions for their family reunions and graduation parties. Yeah! There was life somewhere at Camp!

I parked in the visitors parking lot outside of TV2 and took a walk. TV2 is a mobile home park within the Camp. It's a small area with old trailers that have electrical hookups but no running water or toilets. Those who own the trailers have to use the Camp's shower/toilet buildings. My in-laws used to own one of these trailers and I wanted to see if I could find it. I wasn't sure of their address number but I was sure I knew where it used to be. They sold it about 15 years ago and who knew if it was still standing. Heck, the trailer was old when they owned it!

The first thing I noticed in TV2 made me giggle. Some of the mobile homes had satellite dishes! What a hoot! I thought the idea was to come out to Camp to get away from it all. I guess others see things differently ;-) Next I noticed the water pumps were gone. Where did everyone get their water for cooking? Oh and how about this... some of the trailers had porta potties next to them! Well now, isn't that convenient! Don't get me wrong, I'm not a big fan of porta potties. But I remember plenty of times when I had to grab an umbrella and go out into the rain when nature called and it was no fun. You'd still have to go outside to use these porta potties but at least the walk was short. I would have welcomed one at my in-laws' trailer!

OK, so maybe the old trailer wouldn't be as easy to find as I thought. I walked to where I thought it should be but I didn't recognize the trailers there. I talked to an elderly couple whose trailer I thought I recognized. They'd been there for 30 years but they didn't remember my in-laws. Hmm. The empty field across the street now had a row of trailers on it. That was a bit disorienting. I studied the trailers for a bit and then it dawned on me that my in-law's trailer had a bay window in front. Sure enough, there was one with a bay window in the right vicinity but it had had a new shingled roof put on it and a large, closed in porch added to the side. The folks who owned it were seated outside and I went over to talk to them. They'd didn't know anything about the trailer's previous owners. They'd just bought the place. They were kind enough to invite me in to see if I might recognize it from the inside. I went in and knew in an instant it was the same trailer. A wave of familiarity came over me and for the first time since I'd come to Camp I had a warm happy feeling. I also figured out where the TV2 residents got their water. An Absopure dispenser right in the kitchen!

After TV2 I went to the Chalet which is where they had a display of old Camp memorabilia, photos, old camp registration forms, tshirts for sale, and were showing a video about the history of Camp Dearborn. I watched the video and looked at the photos and was transported back in time to the Camp Dearborn I remembered. Oh what a feeling! It was so good to see pictures of the Camp the way I remember it. I just had to buy a copy of the DVD and a Camp Dearborn tshirt. I left feeling wonderful :-)

My last stop was back at the Canteen for a burger and fries and a double scoop ice cream cone. I sat out on one of the picnic tables that surround the Canteen and watched some workers put together the sound and lighting equipment for the band that would be playing later in the day. I'd planned to stroll through the classic car show set up right next to the Canteen but it started raining lightly just before I finished eating. I made a mad dash around the cars looking for any that might be models my family had owned but didn't see any. So with that I headed back to my car and called it a day.

Camp Dearborn has seen many changes over the years and there wasn't much that was familiar to me anymore. I guess that's to be expected though. All in all I'm glad I went and I'm happy to have the photos I took. They aren't the prettiest pictures since the weather was threatening but I'll keep them just the same. The best part for me was seeing the old photos on display. They sure brought back memories of happy times! 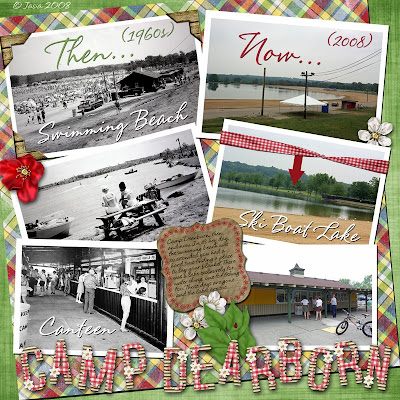 Digiscrapping kit is "Saturday in the Park" by Linda Walton of Bon Scrapatit Designs.
Posted by Jasia at 7:54 PM