When I think of "home" I think of my hometown and I get warm fuzzy feelings. I'm referring to the town where I grew up, not the town where I currently live. I was raised in Dearborn, Michigan, hometown of Henry Ford. If you grew up in Dearborn, that's how you think of it and that's how you say it... "Dearborn, Michigan, hometown of Henry Ford". Ford Motor Company has had such pervasive influence on the town that it might as well have been called HenryFordVille. But it wasn't.

Dearborn had a population of about 100,000 when I was growing up there. It's one of Detroit's bigger suburbs. It was a great town to grow up in, especially back when I was a kid. It's still pretty nice but not as nice as it was. Back when I was kid, Ford Motor Company taxes paid for GREAT city services and wonderful schools.

Every neighborhood had a park with a playground. Several of the parks had refrigerated skating rinks in the winter and a couple had sledding hills too. In the summer, all of the parks were staffed Mondays through Fridays (9-3 I think) by Parks & Rec employees (usually college students) who supervised kids on the playground, gave arts and crafts classes, refereed baseball games for anyone who wanted to play, taught us camp songs, and organized foot races and obstacles courses. They took the neighborhood kids on field trips too! Nowadays we call this "daycare" and we pay good money for our kids to be supervised and entertained on their summer vacations. Back then it was free to all residents thanks largely to those FMC taxes. My neighborhood park, Elmhurst, was 3.5 short blocks from my house.

In addition to parks, every neighborhood had a swimming pool too. Sometimes the pool was at a park but other times it was at a school. The pools were all open from Memorial Day to Labor Day. Swim classes (free) were held in the mornings. Afternoons and evenings (till 8pm I think) were open swim. You had to buy a "tag" made of cloth and sew it on to your swimsuit to use the pools. Tags were $2.00 and you had to buy a new one every year. The pools were staffed at all times by certified life guards and you didn't need to have your parents present to swim. I practically lived at my neighborhood pool which was at my elementary school, 5.5 short blocks from my house (in the opposite direction from the park

But that's not all. Dearborn has it's own camp, for residents only. Camp Dearborn consists of 626 acres of land in the town of Milford, some 35 miles northwest of Dearborn. It has tent camping and RV camping (complete with shower facilities and a laundromat), 5 man-made lakes, an 18-hole golf course, miniature golf, paddle boat rentals, lots of picnic areas, pristine swimming beaches raked fresh every day, fishing, a heated swimming pool, "The Canteen" (sold hot dogs, burgers, fries, pop and ice cream), and dances for the teenagers on Friday and Saturday nights. All you had to do to get in was show your driver's licence. Additionally, residents of the city could send their kids to day camp or 2-week camp at Camp Dearborn too (there was a modest charge for these). My dad used to take me to Camp Dearborn all the time. I learned to water ski there, behind my brother's boat. When we were seniors in high school we spent all our skip days at Camp Dearborn.

In addition to having an outstanding Parks and Rec department, great parks, pools, and the camp, the city of Dearborn also has a top notch hospital, a University of Michigan campus and the Henry Ford Community College. And did I mention it's loaded with history? Well, it is!

I grew up in the shadow of Greenfield Village (similar to Colonial Williamsburg) and the Henry Ford Museum (together with Greenfield Village it is the largest indoor/outdoor museum in the country). And then there's Fair Lane, Henry Ford's estate. Yeah, Dearborn has history in spades.

My high school was directly across the street from Ford's Engineering and Automotive Testing grounds. Of course that's nothing special in Dearborn. You can't spit without hitting Ford property in Dearborn. But Ford Motor Company was a good friend to Dearborn. The city was always clean (had its own trash removal trucks and crew, no additional charge to residents) and always had a "beautification" campaign going. They also had tractors with plows on the front and they plowed the residential sidewalks in addition to the streets of the entire city all winter long :-)

Dearborn had wonderful Police and Fire Departments too. FMC made sure of that. The streets were safe and the cops had a reputation for being tough. I remember back when I was in high school (muscle car era), FMC gave the Police Dept a whole bunch of Mustangs to test drive for a year. We had the best looking cop cars in the country! That is until a couple years later when FMC asked the Police Dept to test drive a fleet of Lincoln Town Cars for a year. Ya gotta love a company that takes care of its neighbors sooo well.

Every year the City of Dearborn hosts a celebration called "Homecoming". It's always held the first weekend of August at, where else, Ford Field (Dearborn's largest park). It's really one big reunion because Dearborn is a city that people love to come back to. Dearborn has 5 high schools (3 public, 2 Catholic) and almost all of them hold their class reunions over the Homecoming weekend too. Additionally, most classes have a table or booth set up at Homecoming so you can find old classmates just about every year at Homecoming. There's also an art show, a classic car show, a pancake breakfast, live musical entertainment, fireworks, and a midway. It's the place to be!

I told myself not to go on and on about my hometown in this article because I'm writing for the Smile For the Camera Carnival and it's supposed to be about the photos. But gol darn it, it's hard not to sing the praises of Dearborn when I think of home...

I'll leave you with one last claim to fame for Dearborn (and this one is in the pictures). How many other cities can boast having the Oscar Mayer Wiener Mobile on permanent display? Pretty cool, eh? I know I've got you green with envy now! 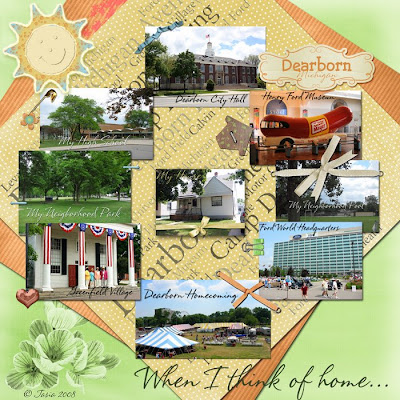 Scrapbook pieces came from various designers of the Festicolor MegaKit. Photos are all mine.
Posted by Jasia at 9:26 PM