The 4th Edition of Smile For The Camera takes its word prompt from the Ace of Hearts. What photograph do you consider "My Favorite Photograph," the one that has won your heart.

Choose a photograph of an ancestor, relative, yourself, or an orphan photograph that is your favorite family photo or that photograph you've collected and wouldn't give up for a King's ransom.

My first thought when I read the prompt for the next edition of Smile For The Camera was, "you've got to be kidding!" Share my favorite photo? That's like asking me which of my children is my favorite. Can't possibly choose. No how, no way.

I've been pondering the question ever since. In fact, every time I look at my photos I'm asking myself, "Is this it? Is this my favorite?" It's driving me crazy! Now maybe I could pick my favorite from among Auntie Annie's, my mom's, or cousin Antoni's photo collections, photos I've scanned and truly treasure. But my favorite among all my photos? That's a tall order considering I've taken over 10,000 photos myself since I got my first DSLR camera in 2005!

So I'm thinking, OK, ShadyMaven would probably prefer older photos to current ones being as she's such a fan of genealogy and history and all. Taking that into consideration I decided to make my choice from among my old black and white (or sepia) photos. I figure I probably have somewhere in the neighborhood of 700 of those, a much more manageable number to choose from. Yeah, right. No way can I choose a favorite from among 700 photos!!! Even if I eliminate half of them because someone has their head turned or the photo is too faded, that still leaves me with somewhere in the neighborhood of 350 photos. It's still too many.

So here's what I finally decided to do. I selected my two favorite photos from among my "one and only" photos. These are the ones that I have only one such photo of the subject which makes them especially precious to me. So, without further ado, here are my two favorite photos (nope, couldn't choose a favorite between them). 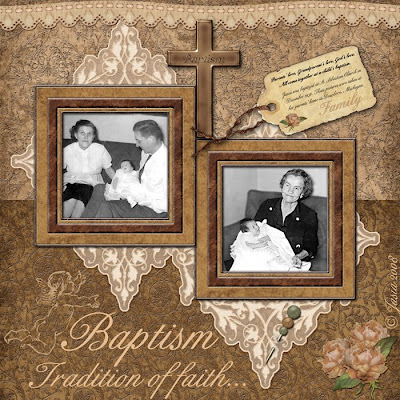 The top photo is the "one and only" photo I have of me with my mom and dad. It was taken on the day of my baptism at my parents' house. I know, hard to believe that there's only one photo of us together given that my parents didn't divorce or separate or anything. But as far as I know, it's the only one in existence. The other photo was taken the same day and place. It's the "one and only" photo I have of me and my grandmother, the only grandparent still alive after I was born. She didn't pass away until I was 13 years old but this is the only photo of the two of us known to exist.

Now it's done. Sigh. The choice is made and now I can stop ruminating about which is my favorite photo. Yeesh. Like I don't have other things to being thinking about... like maybe focusing on the research for my family history ;-)
Posted by Jasia at 8:01 PM