An Update On My Summer Photo Project

If you recall, my photo project for this summer is to try to photograph all the models of cars my family has owned. My brothers and I put our heads together a couple months ago and made up a list of 17 cars owned by my parents, my brothers, and me. I've been trying to find them and photograph them ever since. It hasn't been easy. As of today, I have photos of 6 of my family's 17 cars. Only one of them is the same color as the models we owned, but hey, what's Adobe Photoshop for anyway? Right?

The car cruise along Telegraph Road (formerly known as "Cruzin' Telegraph" but now called the more lengthy "Telegraph Tomorrow Classic Car Cruise") took place last Saturday. It was a lovely day for cruzin' and west side suburban Detroit communities from Taylor to Redford enjoyed a wonderful display of classic cars. I enjoyed them too :-)

The Telegraph Cruise had some real gems as well as some zany characters. I supposed you'd more enjoy seeing the zany ones, eh? Ok, here we go. 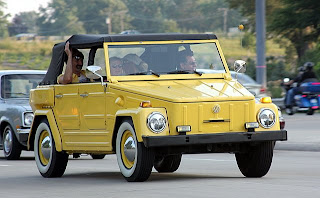 Who remembers "The Thing" from Volkswagen? Not one of their finer moments, eh? 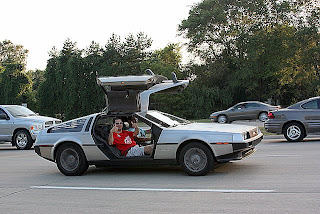 And then there's John De Lorean's car. It will always be famous for it's appearance in the movie, "Back to the Future". 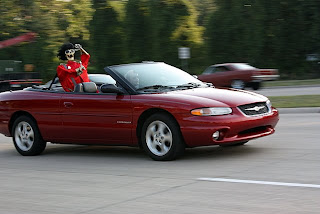 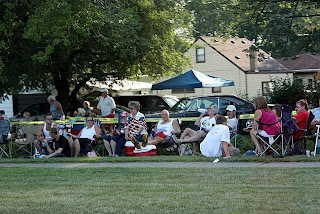 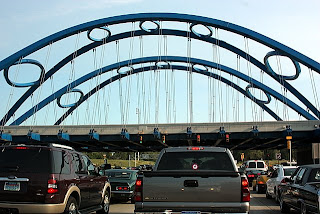 The road was packed too. Lots of cars and drivers participated in spite of the high gasoline prices.

So which of my family's cars was I able to catch? 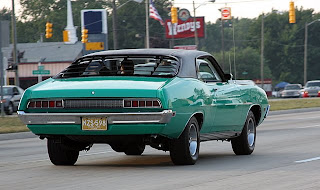 Here's a 1970 Ford Fairlane (the unsexy cousin of the more popular Torino). This was the 2nd car I owned. Mine was a medium blue with a dark blue vinyl top, but it didn't have the sporty slats in the rear window ;-) It wasn't shiny and new looking like this one when I got it in 1976 either. I didn't pick this car out. I bought it because my brother (who really knew cars) said it was a good deal and in good shape. Personally, I didn't like it. It was only slightly more appealing to me than driving my first car, the Maverick (that should have been a Mustang!). 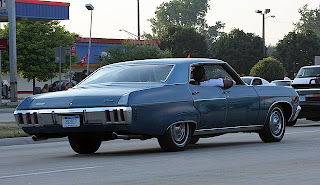 And here is my brother's 1970 Chevrolet Caprice. My brother bought it used when he got out of the Navy in 1972. His was a dark grey (pewter) color. I only drove this car once. My brother let me take it out one night when I wanted to go out with my friends. Unfortunately I lost track of time and in a hurry to make it home by curfew I forgot to put some gas in the tank. When my brother got up for work the next morning and found his tank on empty he was furious. In spite of my apology and contrition he never let me drive it again.

The other cars I've been able to photograph this summer were from the Motor Muster at Greenfield Village. 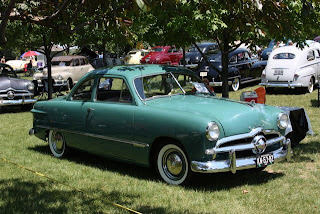 Here's my parents' first car, or at least the first car my brothers remember them having. I know they bought it brand new because they saved the receipt :-) . It's a 1949 Ford. My brothers don't remember what color ours was so this could actually be the right color. I wasn't born yet so I can't help with the color ;-) 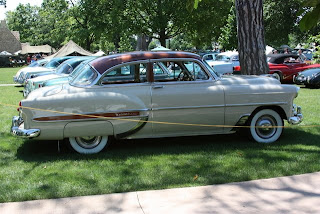 Here is my mom's first car. It's a 1953 Chevy Bel Air that she bought used in the early 1960s. Ours was red with a white top and trim. She didn't keep it long and sold it to my oldest brother. I loved this car and cried when my brother sold it. I felt like he was selling a member of the family. This car was actually pretty tall and I enjoyed sitting up high in it. It made me feel like somebody important (or so my brothers tell me ;-) . 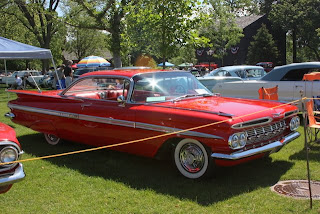 Here's a 1959 Chevy Impala like the one we owned. Ours was two-tone with grey on the bottom and white on the top. My dad bought it but then turned around and sold it to my brother (the other brother). I only vaguely remember this car. 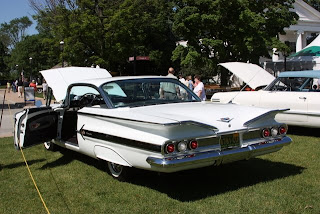 When my dad sold the 1959 Chevy to my brother he bought this one, a 1960 Chevy. And ours was white just like this one! :-) This is the car that was immortalized in Bob Seger's song Night Moves... "out in the back seat of my '60 Chevy". I do remember this car having a big back seat. Oooh la la!

So that's it. I've been to the the Henry Ford Museum, the Motor Muster at Greenfield Village, the Gilmore Car Museum, the Classic Car Meet at Camp Dearborn, and Cruzin' Telegraph. I've seen hundreds if not thousands of vehicles and so far I have only been able to photograph 6 from my list of cars. So what's the problem, you ask? Well, here's my theory.

It takes a lot of time and an unbelievable amount of money to restore a classic car. So people tend to invest their time and money in cars they are passionate about... either their first car or one they always wanted to own (mostly from the later category). And what do people want to own? Cool cars, cars that were sporty, had lots of character, had lots of power, or were elegant. They don't tend to restore the stodgy family sedans that my family (and most families) owned. If I had a nickle for every restored Mustang, Chevy from the mid to late 1950s, Camero, GTO, Corvette, or Cadillac I've seen I'd be a rich lady. Unfortunately we didn't own any of those. Thank goodness my family wasn't into station wagons because the only ones of those I ever see are the old woodies".

Summer isn't over and I've not given up hope of finding more of my family's cars to photograph. I'm still hoping to attend the grand-daddy of all cruises, the Woodward Dream Cruise, on August 16th, and the Old Car Festival at Greenfield Village on September 6th (I won't find any of my immediate family's cars at this one but maybe I'll get lucky and find my grandparents' cars). If I don't find my granduncle's Duesenberg at the Old Car Festival maybe, just maybe, I'll make it to the Duesenberg Museum in Auburn, Indiana. Wish me luck!
Posted by Jasia at 3:59 PM