A World of Pleasure At Your Fingertips

One of the things I inherited when my mother died was her camera. It's an old Argus 75, a twin lens "reflex" box camera that was made by Argus Cameras of Ann Arbor, MI, a division of Sylvania Electric Products Inc. According to the information I was able to find on the 'net, this camera was manufactured from 1958-1964. The camera has time and instant (approximately 1/125th second) shutter speeds and a fixed focus 75mm Argus Lumar lens. My mother's camera kit also came with a second "portrait" lens which as far as I can tell merely puts a blur/soft focus on the outside edges of its photos. The camera uses 620 roll film (6cm x 6cm exposures).

As could be expected, my mother kept her camera in the original box with the instruction manual, the flash attachment, an unopened roll of film (can't imagine that's any good at this point), a package of flash bulbs, and the additional lens. I'll admit there were times over the years when I'd roll my eyes at my mom's pack rat mentality but in this case I'm really glad she kept the whole kit 'n caboodle. 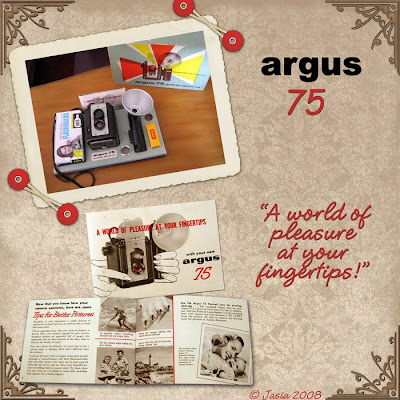 I don't know exactly when my mother got this camera. The prints from it are distinctively square. As I look through her collection of photos there comes a point when the photos go from rectangular to square and never go back to rectangular. I would assume that that was the point where she got this camera. However, that point was just after my birth in 1956. And according to a couple different sources on the net, this version of the camera wasn't made until 1958. So I don't know if the sources are in error, if this was an early or limited edition version of the camera, if those first square photos in my mom's collection were taken with my brother's "Brownie Bullet" camera or someone else's camera altogether. I suspect the later. If I'm not mistaken, my brothers bought the Argus camera for mom as a gift. They both had paper routes and I think they saved their money and bought it. You had to be 12 years old to have a Detroit News paper route. My oldest brother wouldn't have been 12 until the spring of 1957 and my other brother in the spring of 1958. So it may well be that the camera was purchased in 1958.

In any event, this was the camera that captured our family's history from the late 1950s till the early 1970s. At some point after that I got a Kodak "Instamatic" camera that took its place. Later, in my college years, I bought a Pentax ME Super which was my first SLR camera. But as far as I know, this was my mother's only camera. 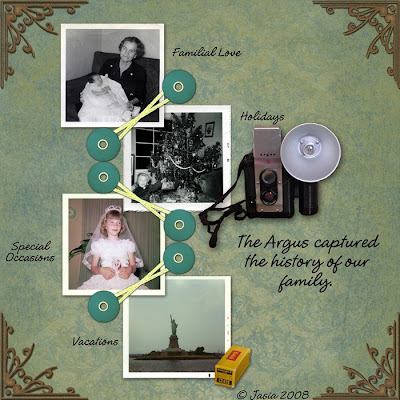 When I was in high school, I took two photography classes as electives. We were required to have a medium format camera for both classes so I borrowed my mom's Argus 75. The object of the Photo 1 class was to learn how to develop and print black and white film. The object of Photo 2 was to make enlargements. Neither class gave us instruction on composing subject matter, nor did we "learn from the masters" what made a good photo good. So my photos from those classes aren't all that interesting to look at. But boy did I capture my high school life in pictures!

Each week we'd have an assignment such as "round things" or "shadows". We'd then have to go around our neighborhoods and take a dozen pictures that fit the assignment topic, develop the film, print 12 "contact prints" (2" x 2"), and glue them to the black pages of our assignment books. These were classes where you got credit for completing the assignments rather than graded on your creativity or artistic merit. My subject matter was limited by how far I could walk or bike and who was around when I needed to take pictures. So mostly my pictures were of my neighborhood and my family and friends. :-) At the time, they seemed like boring pictures to me. I wanted to go somewhere exciting to take photographs. But now I'm ever so grateful to have them. The photos may be small but the memories they trigger are huge. And they scan nicely :-) 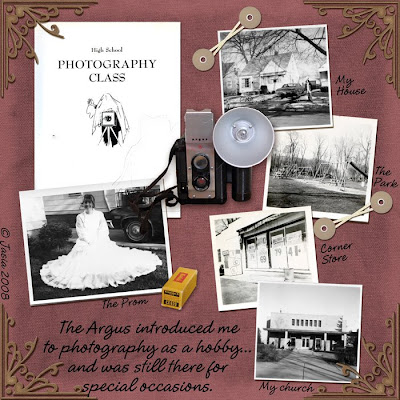 I don't think the old Argus was ever used after I completed my photography classes. As far as I know, it sat on a shelf in the closet at my mom's house until it became mine last year. Part of me wants to buy a roll of film for it and give a try to see if it still works. The other part of me wants to leave it in retirement and simply treasure the photos it captured of our family history.

I used papers from the kit, "Grandma's Treasures" by Sailor and Lula for the scrapbook pages.