Wraping Up My Family Car Photography 2008

This past weekend I wrapped up my car museum/cruise/meet photo shoots for 2008. Saturday I was at the Auto Fest in Frankenmuth, Michigan. Sunday I took in the Old Car Festival at Greenfield Village in Dearborn, Michigan. 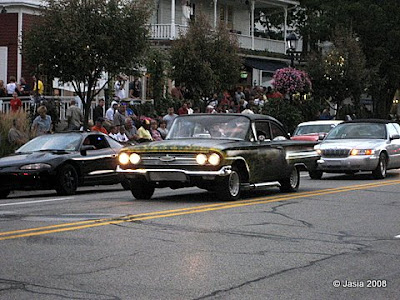 Frankenmuth's narrow streets make you feel like you can just reach out and touch the cars. 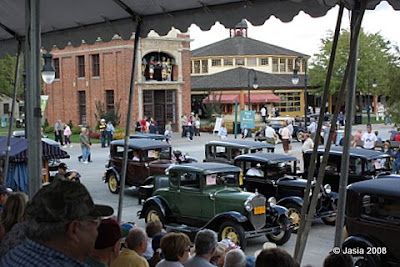 Here's a display of Ford Model A's from the Old Car Festival.
I've lost track now of how many car events I attended this summer. The number of photos I've taken is right near a thousand. But did I get the ones I wanted? Yes and no. I got about half of them. I'd hoped to get them all but that just didn't happen. It wasn't a matter of not being able to shoot them from a good angle, I couldn't even find half of them. Oh well, there's always next year :-)

I did have a stroke of good luck at the Old Car Festival yesterday. I took along 2 photographs, family pictures with cars in them. I've been trying to identify these two vehicles for over a year now. My mom told me that her father's first car was a Model T. Apparently when he sold that he bought a Willys Knight. When he sold that he "bought another Ford". And that's the lump sum of what she could tell me. I have a family picture with one of these cars in it but I didn't know which one. Judging by how old the kids in the family looked to be I'd estimated that the photo was taken between 1928-1930. I did a good bit of research on the Internet and looked at examples of various models of these cars until my eyes glazed over. My best guess was a 1930 Model A. It turns out it wasn't a very good guess. The experts (3 of them, which gave me a good bit of confidence in their independent decisions) determined that it was a 1929 Willys Knight model 70B. Yeah! I don't mind being wrong. I'm just tickled to finally have figured out what the heck it was! I'm not going to show it here but I'll write up a post about it one of these days.

The other photo I had was this one. 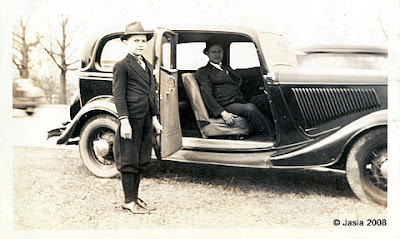 The gentleman in the car, Stanley, is the husband of my grandaunt Helen. The boy is Bob, my first cousin once removed. The date on the photo was 1936/1937. Given Bob's birth year of 1927 I'd say that's about right. Bob's sister Charlotte told me that this was my grandfather's car. It struck me as a bit odd that her father Stanley and brother Bob would pose with someone else's car but hey, she was there, I wasn't. She also told me that her father once owned a Duesenberg. I don't know my classic cars all that well so I wondered if the car in the picture was a Duesenberg and that perhaps Charlotte had been confused. But when I showed this photo to the experts they all instantly recognized it as a 1934 Ford 2-door sedan. It was nothing short of amazing how quickly they could determine not just the make and model but the year as well! And without consulting a book or magazine or anything!!!

So now I have photos of and can identify my grandfather's second car and third car. There once was a photo of his first car as well. The caption stating so remains in my mother's photo album. Unfortunately, the space above the caption is blank. I have no idea where the photo might have gotten to. But I'm hopeful that one day I'll come across it!

All in all, it was a really fun summer photo project to take on. I met lots of friendly, knowledgeable, car-loving people. I saw many awesome cars. I got to take pictures, something I love to do. And I was able to gather more information for my family history. :-) I'm already looking forward to next summer and strategizing how I'll get photos of the makes and models I wasn't able to get this year!
Posted by Jasia at 2:25 PM