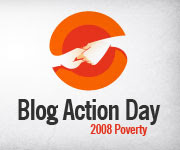 "Poverty" is defined at Dictionary.com as "the state or condition of having little or no money, goods, or means of support; condition of being poor; indigence." That could also be a summary of the state of Polish immigrants to America or even the situation for a majority of the population of Poland at various times in its history.

My own family members were stricken by poverty. And not just a few of them. Like most of the Galician (southern) section of Poland, they were so hungry, so poor, so unable to provide adequate food, clothing, and shelter for their families that they left the homeland and people they loved to make a life in "the new world". That's not to say that Poles throughout the rest of the country were untouched by poverty, but the Galician section of Poland is reported to have experienced the most widespread poverty during the "great migration" years of 1880-1920.

What was the cause of such widespread poverty in Poland? There are two main reasons commonly cited. First, Poland was almost entirely an agrarian nation. What farmers anywhere are well off? Even here in the United States our farmers struggle to get by from year to year depending on the weather conditions and the economy. Add to that the fact that virtually all of the peasant farmers in Poland were illiterate which limited their options for other means of supporting themselves. And while we're at it, toss in the fact that they were heavily taxed by first land lords and later the repressive regimes of Germany and Russia, and you have a good foundation for poverty.

Secondly, Poland was a predominantly Catholic country. Large families were the rule not the exception. While large families can provide many helping hands for farm labor they can also over populate an area to the point that the land cannot support the family members anymore. Such was the case in Poland. Family farms were small and became even smaller when children married and were given their own strip of land. Throw in a flood or drought or even just an ill-timed freeze and you get instant widespread poverty.

Life wasn't much better for those that came to America. At least not initially. Many found themselves discriminated against, lacking in language skills, and unfamiliar with big city life. But they were motivated by hunger and most had the advantage of youth on their side. With a strong back, a willingness to do what was necessary to survive, and a very thrifty nature, most were able to eat regularly and sleep with a roof over their heads every night. It also helped that most immigrants were aided to some extent by family or friends who came before them.

In my own family, my maternal grandparents were lucky enough to know economic prosperity in their life time. They got jobs and lived frugally the first few years after they immigrated. Then they bought a small neighborhood bakery that they later expanded into a baking company. With seven delivery vans they delivered baked goods throughout the city of Detroit. They owned their own home, were able to buy new cars and fur coats, and sent money to starving family members back in Poland. Their children all graduated from high school. Poverty, for them, was a thing of the past.

My paternal grandfather wasn't as lucky. He was able to buy a home after he married but he drifted from one occupation to another never earning quite enough to make ends meet. He fathered 11 children only one of which graduated from high school (the baby). His other children were out on the streets working to help support the family from ages 12-14 on. My father made it possible for his youngest sister to graduate from a Catholic high school and paid off his father's mortgage before he married himself. My paternal grandfather didn't go hungry too often but didn't do more than scrape by after coming to America. He drifted from one job to another never really "making it" at any of them. His children, however, all did well for themselves. And his grandchildren all graduated from high school, some from college.

My paternal great grandparents, I believe, came to America with some money of their own. They were able to buy a modest home rather soon after immigrating and only took in one boarder that I know of. I've not been able to determine how much education their 11 children attained but it's believed they attended a Catholic grade school. The children all did OK for themselves, though some did better than others. It's likely my great grandparents didn't go hungry once they arrived on American shores. But they weren't exactly well off either. When two of their children died from scarlet fever they were buried in paupers graves.

The closest I've ever come to poverty was my days as a college student. And even then I had a roof over my head and dorm food three times a day. So I'm not sure that really counts. I'm grateful to my parents and grandparents for all their hard work and sacrifice. I'm especially grateful that my grandparents and great grandparents made the decision to cross the ocean for a chance to rise above the poverty they knew in Poland. My heart aches every time I think about them having to say goodbye forever to their parents and siblings, aunts and uncles, friends and neighbors. They left a culture they loved, a language they understood, and way of life that was familiar to them, all because of poverty. It's no stretch to say that poverty tore their families apart. Poverty will do that. 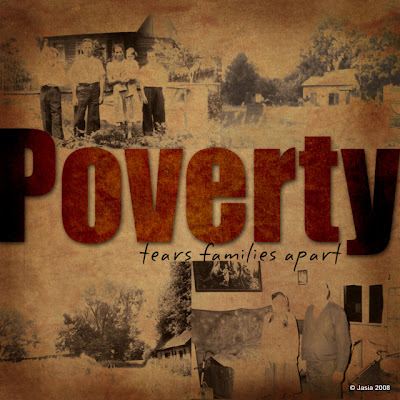