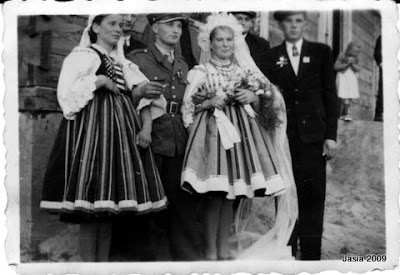 They could be family. They could be friends. This photo was from my Grand Aunt Mary's collection and there is no information on it. The photo was taken in Poland, I don't know when. WWI? WWII? Sometime in between? I'm leaning towards the WWII era because I don't think hemlines were quite that short in the late 1910s or the early 1920s. The gentleman's military uniform could be a clue. Unfortunately, I don't know anything about Polish army uniforms to be able to date it.

One thing puzzles me about this photo and the others from Mary's collection. Mary's family was from the southern area of Poland, near Krakow. But the vertical stripes in these skirts and all the others from her collection are more indicative of the ethnic dresses from the Lowicz region (central region) of Poland. I'm certainly no expert on Polish folk dress but it strikes me as a bit odd.

The gal on the right is wearing a long white veil which is not typical of the ethnic dress of either the southern or central areas. I'm wondering if she was "crowned" for a festival or perhaps she was just married in her best dress (this is not a typical wedding dress).

Folk dresses like these would have been worn for any and all special occasions, especially religious and harvest festivals. Small children wore them, old Busias (grandmothers) wore them, and all ages of women in between wore them. The older women would have worn a much longer hem length though ;-)

Written for the 10th Edition of the Smile for the Camera carnival. 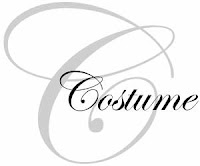