Oh The Many Uncles...

Uncles, I have had many. Most of them are deceased now. I remember my uncles well even though I was not close with any of them.

On my dad's side:
Uncle Stanley was a colorful character who wore colorful clothing, smoked cigars, and said, "hah?" as often as most people say, "um". He was my dad's oldest brother and lived to the ripe old age of 92.

Uncle Waller (aka "Walter") was the black sheep of the family. He never married, was drunk much of the time, and couldn't hold a job. He was 18 months younger than Stanley and died young at age 61.

Uncle Eddie was most similar in appearance to my dad, lived the closest to us, and was the brother closest in age to my dad (4 years younger). He died at the age of 65.

On my mom's side:
Uncle Sigmund (aka Ziggie) was the most colorful dresser I've ever known. He wore pink plaid pants, bright green sport coats, and lavender shirts (sometimes all at once!) to name just a few items from his wardrobe. Uncle Ziggie worked as a foreman at Cadillac, had no kids, and was always a bit hard of hearing. He's still alive but is suffering from dementia.

Uncle Richard (aka Richie) worked at A&P and was walked all over by his domineering wife.

Uncles by marriage:
Uncle Chester was married to Annie. He had a slight build and used to like to gamble (on horse races). I rarely saw him because he didn't attend many family functions.

Uncle John was married to Ceily. I have no memory of him whatsoever. He never came to family functions that I can recall.

Uncle Johnnie was married to Genevieve. He didn't attend many family functions either. I don't remember him well.

Uncle Eddie Wnuk was married to Florence. They lived on a "farm" in Nankin Township. They had no children but Uncle Eddie used to own a pony and a mini-bike. He used to let me drive the pony cart and mini-bike around on their property. He didn't attend many family functions.

Uncle Eddie Rodzik was married to Eleanor. He liked to drink and socialize but I don't remember his drinking being a problem. He came to family functions but I didn't interact with him much.

Uncle Bill was married to Mary Jane. He was reserved and was the only one in the family that had a "white collar" job (working for Campbell Ewald). He was good looking and friendly. He smoked an occasional cigar.

Uncle George was married to Helen. He worked at Burroughs and liked to play golf. I don't remember him well.

And then there was Uncle Eddie who wasn't really my uncle but my mom's cousin. I called him "uncle" because he was close to my mother's age. He liked to drink and sometimes over did it, but he was a funny guy and always made a point of talking to me at family functions.

Just a few years ago I found my "uncle" Henryk living in Germany. Like Eddie, he wasn't really my uncle but my mom's cousin as well. I never met him in person but he told me more about my family history in his letters than all of my other uncles put together. I thought of him as an uncle and felt deep affection for him. He died just a few weeks ago, in January 2009. I'm really grateful for all he shared with me. He was a very kind and generous man.

Not too long after I found Henryk I found Antoni, another of my mom's cousins that I thought of as an uncle. He too shared many stories about life in Poland and our family. He died in November 2006.

Here's to my uncles. I didn't know any of them very well but I cared for them all. For the most part they were all regular hardworking guys who cared about their families and their homes. Some were soldiers in WWII, others were held captive. Some had many children, some had none. All loved their homelands and their Christian faith. May God bless and keep them all. 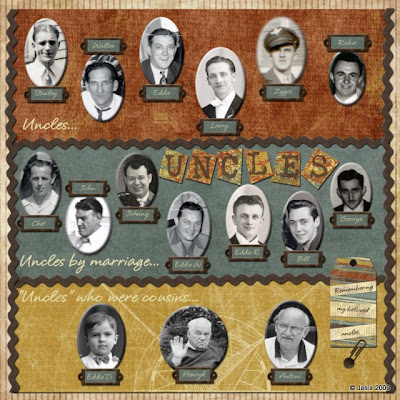