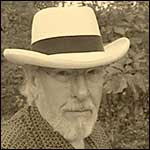 The community of genealogy bloggers lost one of our own this week. Terry Thornton, author of the Hill Country of Monroe County, Mississippi and Hill Country H.O.G.S. Webpress, died Monday, August 9, 2010, at the age of 71.

I wish I could link to my favorite articles by Terry but unfortunately those are no longer posted online. Terry was a regular participant in the Carnival of Genealogy for quite some time. Those of you who were following the Carnival of Genealogy back in 2007 will certainly remember Edition #34, the topic was "Halloween and the Supernatural". Terry's submission in that edition of the COG was, "Haints on the Road in Parham...". That was one of my absolute favorite articles written by him. Boy, he was a terrific storyteller! He made life in the Old South come alive for me. He wrote about "witch balls" and "bottle trees" and a zillion other things that were unique to his neck of the woods. If not for Terry, I would never have discovered a bottle tree in my very own neighborhood. I am reminded of Terry every time I drive by that bottle tree. It makes me smile, just as Terry's stories did.

Terry shared much of his life online, including some of his visits to his son's house in New Orleans. On one such visit he introduced us to the family "livestock" which consisted of 4 beautiful Persian cats (including his dear Hattie LaRue who died recently) and 1 adorable Yorkie. He was also known to share some facinating recipes for "Southern delicacies" such as "Mugwups", frog legs, terrapins, & eels. And way back when, he did weekly "roundups" of his favorite blog posts in a series called, "Harvest From the Blog Garden". These vintage-Terry articles are still available at the Way Back Machine.

In his words and pictures, Terry left us much to remember him by. I will remember him best for the many wonderful articles he wrote on his first blog, Hill Country of Monroe County, Mississippi, many of which he submitted to the Carnival of Genealogy. He will live on in my heart and mind for years to come.

God bless you, Terry Thornton, and may you rest in peace in the Mississippi soil you so dearly loved.
Posted by Jasia at 12:23 PM