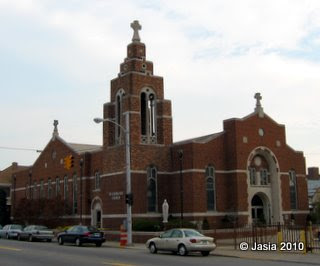 St. Ladislaus parish is located in the heart of the city of Hamtramck - often referred to as "Little Poland".

St. Ladislaus High School opened in 1929 and graduated thousands of Polish Americans before its closing in the early 1980s.

In the early 1970s, the High School offered courses not only in Polish language but also in Polish history, folk art, modern art, and folk dancing. Several study tours were also sponsored for students in Poland.

The elementary school is now closed. Back in 1985, the school had 238 students enrolled and was run by the Sisters of St. Francis (Sylvania, Ohio).

For more information, visit the Archdiocese of Detroit web site.

The Golden Jubilee book of St. Ladislaus Parish, 1920-1970 has been cataloged and is searchable on the PGSA web site.

Some information from, "The Polish Roman Catholic Churches of Metropolitan Detroit" by PERC. c. 1985. Used with permission from Michael Krolewski, editor.
Posted by Jasia at 2:19 AM