Here's Why You Should Clean Out Your Attic 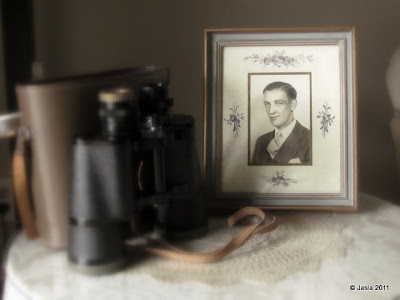 Father's Day is just a couple days away. So it's understandable that I would be thinking about my dad and remembering the good times we had together. My dad died when I was only 17 years old. I was away at college at the time and I returned to campus shortly after his funeral. I wasn't at home when my mom and brothers went through his things and donated most of them. My brothers took his tools and fishing tackle. My mom kept his wedding ring which was later given to one of my brothers. I didn't remember being given anything of my dad's. Over the years, I've often wished I had something tangible to hold in my hand to remember him by. I have a few photos, but not many. I would love to have one of his neckties or hats or even one his hankies (he preferred those to tissues). But those things were all donated to the St Vincent De Paul charity.

After my mom died (2007) and my brothers and I were cleaning out her house I asked them if they knew of anything remaining that had belonged to my dad. But there was nothing. It had been over 30 years since my dad died so that wasn't really surprising.

Fast forward to 2011. I've been cleaning out the attic, garage, and basement of our home. My kids have been carrying down box after box from the attic... things I haven't seen in many years. Over the last week I've been going through each of the boxes and donating and trashing most of the stuff. But I have found a couple of special items, one being an item of my dad's that I didn't realize I even owned. It's a pair of binoculars. I suspect the box they were in was never unpacked after we moved to this house or even in subsequent moves.

I knew these were my dad's binoculars as soon as I saw the case. I opened it up and sure enough the name tag inside had his name, address, and phone number on it. I don't remember the circumstances of him getting the binoculars. They may have been purchased with S&H Green Stamps. I do remember how often he used them, and I used them too. We used to take drives to the riverfront (Detroit River in Ecorse & Wyandotte or the St Clair River in Algonac) and watch the freighters go by. It was fun to look for identifying information to see where the ships had come from or were going to. My dad also liked to check out the fishermen in boats to see what they were catching. Those binoculars bring back lots of happy memories for me... leisurely time spent with my dad.

It's interesting that on the eve of Father's Day, a holiday when children normally give gifts to their fathers, I have received a gift from my father. It's a gift I can hold in my hands and remember him by. It's a gift that brings me great joy.


Happy Father's Day, Dad.
Thanks for all the good times we shared
and the happy memories I have.
Posted by Jasia at 7:39 PM