The Seasons of My Genealogy Research

Spring (1996-1998)
I first began my genealogy addiction in 1996. Why I took a special interest in my family history at that specific time I cannot say for sure. It was a about that time that I received my first copy of genealogy software (Family Tree Maker

In any event, those early years of my research were filled with lots of frustration as I tried to figure out where to begin. Of course I started with what I knew and added information here and there as I talked with relatives but that didn’t get me very far. I also took an adult enrichment class in genealogy offered in my school district which was a total waste of time. I picked up some magazines and books but didn’t find much of help until I found Polish Roots

by Rosemary Chorzempa. That’s when things started to make sense to me. Specifically what I learned was that I had to find the names and locations of my ancestor’s villages in Poland and then hope and pray that the LDS had filmed the vital records in those villages.

I think of this as the spring of my research because I was really learning and planting research seeds.


Summer (1999-2002)
Unfortunately, the research log I meticulously kept while I did my early research is now packed away in a box across the state that I cannot access at this time. So I’m having to write this from memory. I will correct the dates in the future if it turns out my memory isn’t so accurate. ;-)

My serious campaign to find the names and locations of my 4 grandparent’s ancestral villages in Poland began with a little luck. In 1999 my first happy dance came along when I discovered the ancestral village of my LIPA family line, Bobrowa. In 2000 I found the ancestral village of my MIZERA family line, Wojnicz. I remember looking for LASKA family records when I was at the Family History Library in Salt Lake City in the summer of 2001 so I know I hadn’t found their village yet. But I believe it was not long after that when I did find their records in Podborze so I’m going to say it was late in 2001 when I was doing that happy dance. The last and most difficult family for me to research was my LISOWSKI line. I did manage to locate their ancestral village in late 2001 or early 2002.

I spent countless hours during this period in dark rooms looking at microfilms at my local Family History Center. I think of these as the “mushroom years”.

During this period, I also joined the PGSM and the PGSA. What I learned from the folks at PGSM was invaluable to my research.

I think of this as the summer of my research because I was cultivating and harvesting vital records left and right. I was also weeding out erroneous information along the way.


Autumn (2002-2005)
During this period I launched a campaign to find living relatives in Poland and the U.S. I wrote to the parishes and civil offices of my family ancestral villages. I put ads in newspapers looking for family members. I hired a professional researcher to locate records for my LISOWSKI family line that were not available on microfilm and I paid to have many old Cyrillic script records translated. I was very successful in finding family members in Poland and throughout Europe and the U.S. I corresponded with them regularly, met some in person, did webcasts with others via Yahoo, and learned a tremendous amount about my ancestor’s lives in Poland.

I think of this as the autumn of my research because I was still adding a lot of information but it was less about adding names and dates to my database and more about adding color... life in Poland, family stories, village histories, exchanging photographs, etc.


Winter (2006-present)
By the time I started writing this blog, at the end of 2005, I had already been through the spring, summer, and autumn of my research. The seeds that I’d planted in the 1990s had been cultivated and harvested. I’d succeeded in finding not only the ancestral villages of all 4 of my grandparent’s families in Poland but also the vital records for my family members as far back as records were kept for them. I’d found living relatives that were able to take present day photographs of those villages for me and share family stories that paint a colorful picture of what life was like in Poland “in the old days”. I’ve received hundreds of photos of family members that I didn’t know existed when I started my research back in the 1990s. And I have made many, many good friends along the way.

In the winter season, 2006-present, I’ve been filling in some names and dates here and there, adding some documents as they have become available online (like the Draft Registration cards on Ancestry.com), and reading a lot about the history of my ancestral villages once Google began offering its website translation service. I’ve met a few more cousins and exchanged some more information but the 5.5 years of my winter season can’t begin to compare with the 4-year summer or 4-year autumn seasons in terms of the volume of information added to my knowledge of my family history.

I’m at the point now where I really need to organize all the information I’ve amassed and get on with the writing of my family history. I don’t see myself obtaining much more information, at least not information that would significantly change the stories of my family members as I’ve come to know them. Of course I’m always open to finding more cousins, more documents, more pictures, more history... but really, I should move into the next phase, organizing and writing, and not spend my time trying to find the death date of my 3rd great grandfather’s youngest sister (if you know what I mean). I’m finding it hard to let go of the research phase and move on though because the research phase is so much more fun! I love solving puzzles!!! Organizing and writing can’t compare with the joy in finding the death date of my 3rd great grandfather’s youngest sister.

Most recently, I’ve begun researching the family lines of those who’ve married into my family. It’s been a lot of fun to research families with Canadian, English, Scottish, Jewish, and yes even American history. It’s a great distraction, but really, I should be organizing and writing up my own family history. ;-) 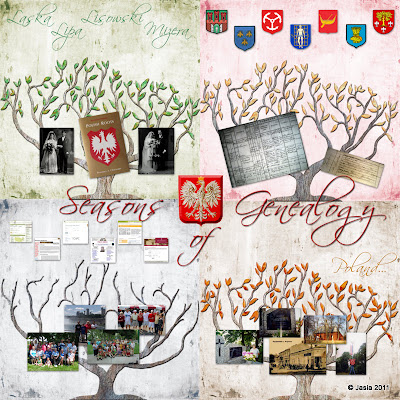 So which season is your genealogy research in? Leave a comment or better yet, write it up on your blog and submit it to the next Carnival of Genealogy. The deadline is July 1st and you’ll find it published on July 4th on the West in New England blog!
Posted by Jasia at 4:50 PM