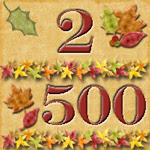 Anniversaries are a good time for reflection. Much can be learned from stepping back now and then and taking a look at how you got where you are today. This is a good day for me to do just that as today marks my 2 year anniversary of authoring the Creative Gene blog and this also happens to be my 500th post.

I started my reflection by rereading a post I wrote last year about my one year anniversary of blogging. Sometimes when I look back at something I've written I'm pretty darn impressed with what I had to say. That post is one of those instances. As a matter of fact, I wasn't the only one impressed with it. It was quoted in a national genealogy magazine, one of two times the Creative Gene blog was featured in a national genealogy magazine in the last year. The other time was for a series of articles I wrote on the subject of declining membership in genealogical societies.

The main thing I was struggling with at the end of my first year was my voice and the identity of my blog. Now, at the end of my second year, I am still struggling but less so. After attempting to focus my blog primarily on genealogy for the past 7 months, I have seen the benefits of focus. I have also seen the limitations of it. In the past seven months I have also spent a great deal of time looking at the feasibility of blogging for income with the idea in mind that perhaps I could phase out of my job as a web designer and become a full time blogger. I can tell you now that my little experiment is over, I won't be giving up my web design job any time soon.

I've come to the conclusion that blogging about Polish genealogy is too small a niche market to generate the kind of traffic one would need to make any serious money at blogging. Even when I wrote genealogy content of a more general nature, and with the much appreciated help from my fellow bloggers who linked to my series and articles, I couldn't pull enough traffic in. The traffic to my blog has increased over the last several months but not substantially. It still numbers in the hundreds of readers per day as opposed to the thousands of readers per day I figure I would need to replace my current income. I'm OK with that. It was just an experiment not something I had my heart set on.

I received two awards in the past year, the Thinking Blogger award and the Nice Matters award. I am very proud to have received both. I am also proud to be in the company of such great genealogy researchers and blog authors as those who participate in the Carnival of Genealogy, which has now become recommended reading for at least one collegiate history class. I'm truly honored. I started a second blog this past year. Like with children, I found the second to be more than twice the work. And last but not least, I had my first podcast interview this year! What great fun! It's been a very good year for the Creative Gene blog.

Perhaps the best thing that has happened to me as a blogger in the last year was developing strong ties with the my fellow Genea-Bloggers. The outpouring of sympathy and support I received when my mother died back in April meant more to me than words can say. The ties were strengthened even more as we stood united during the Ancestry fiasco. I am very grateful for those I now think of as my Genea-Friends.

I'd like to finish up my summary of the last year with a few numbers. I didn't start tracking my blog statistics until January 22nd of this year so I can't tell you the total number of visitors to my blog in the last two years. But I can tell you that there have been 25,300+ visitors to my site since January. I appreciate and want to thank each and every one of those visitors. The most popular link on my blog is "Carnival of Genealogy" (1288), no surprise there. The single most popular blog post I've written since January was Greedy Ancestry.com Stabs Friends In The Back (588) followed closely by my article on the Polish Tartan (586). My most popular series of articles was the one on Declining Memberships in Genealogical Societies (429) followed by Poles in Michigan Vol. 1 (422).

Let's end on a humorous note, shall we? I would like to share with you one measure of how much the Creative Gene blog has increased in value. Back in March, this blog's estimated worth was $21,452.52. Today Creative Gene is estimated to be worth...

Thanks to all my visitors for tuning in. I write for you more than for me.

A great big thanks goes out to my loyal subscribers who read the Creative Gene blog regularly. Because of you I write even when I don't feel like it.

And a super-huge-with-whipped-cream-and-a-cherry-on-top thanks to my Genea-Friends for your support and friendship. I credit you for a large part of the success of this blog. And I do consider my blogging effort to be successful. I may not be a pro-blogger but I know my blog touches the lives of many, if only in a small way.

What's next? Stop by tomorrow to read about new directions for Creative Gene.
Posted by Jasia at 1:52 PM