Christmas Cards Over the Years 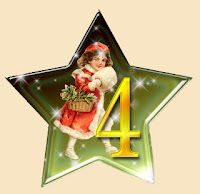 Christmas cards. Are they a thing of the past? Does anybody send conventional cards anymore?

When I was a kid Christmas cards went hand in hand with Christmas. My mother, who could've published a book on being thrifty (and it would have been a bestseller), always hit the day after Christmas sales to get next year's Christmas cards at half price. She and I would go to one of the better department stores in town, Hudson's, Crowley's, Miurheads, or sometimes Montgomery Wards. We would carefully go through box after box of Christmas cards looking for just the right ones. We always bought two different styles of cards, religious cards which were sent to anyone we knew that was Catholic, and secular cards, generally something with Santa on it that would appeal to small children. Neighbors and friends who weren't Catholic and any one with little children in the house got one of the Santa cards. My mom always said "Christmas is for kids" and if you had kids in your family that trumped all other consideration and regards to what kind of card you would get from our family.

My mom always looked for "deluxe" Christmas cards, those being ones with glitter, flock, or gold on them. If we couldn't find ones we liked at one store we just moved on to the next and the next until we found just the right Christmas cards for next year.

Usually on or around Thanksgiving weekend my mom would begin addressing Christmas cards. When I was little I helped her by licking the stamps and licking and sealing the envelopes. Most of the time my mom just signed our names in the cards. There were only a couple people that I remember her writing a note to. They lived out of town and we didn't see them very often. I don't know how many cards we sent out but it always seemed like a lot. We never got them done in one sitting. They didn't get mailed until all the cards were addressed.

Receiving Christmas cards was always a real treat for me. I was allowed to open any cards that were addressed to the family (and most of them were). If they were addressed to my parents only, I had to leave them for mom to open. I can remember ohhhing and ahhhing over the Christmas cards we received from my godmother (my Aunt Ceily). She was the wealthiest person we knew and she always bought the best of everything. Christmas cards from her were always large, religious, gold embossed, and they came in gold foil lined envelopes! Except for Aunt Ceily's card, my favorites were the Santa cards with red flocking on them. They were reminders to be good so that Santa would bring me lots of presents.

Our house was small and the rooms in it were small. As far back as I can remember we had a large mirror that hung on the wall in the living room directly opposite the wall at the front of the house with the big picture window. The mirror reflected the outdoor light around the room and made it feel much larger. At holiday time it also reflected the Christmas tree with all its lights and made for a very festive looking room. As Thanksgiving passed and we began to receive Christmas cards we would always put them up around this mirror. You can see some of the Christmas cards hung around the mirror in the corner of this photograph of my dad (from the 1970s). We also put the cards up around a Christmas picture we had (see the previous post). 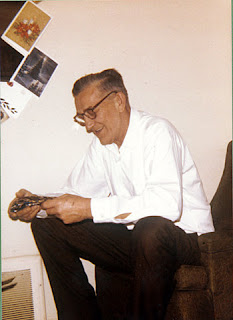 Remember me telling you that my mother saved all sorts of stuff? One of her collections of things that she saved was greeting cards. She didn't save every card she ever received but she saved one whole heck of a lot of them. My brothers and I went through her collection and divided them up so that we each had a good number of cards. About half of her collection was Christmas cards. I got 96 of them including 2 she meant to send but never got around to (one was just signed, "Mom" which I'm sure was meant for me and not my brothers ;-) and the other was signed "Grandma" which was no doubt meant for one of my kids ;-) Most of mom's cards are not dated. I never understood why some people put a date on the cards they sent until I inherited my mom's card collection. Now I get it. Now I wish more people had dated the cards they sent or that mom had taken the time to date the cards as she received them.

Here's a sample of a couple cards she received over the years. First, a gold embossed religious card (from Judges Burtell and Sobotka, district judges at the court where she worked before she retired) and next a Santa card with glitter from her brother "Ziggie" and his wife. 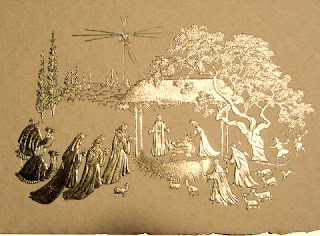 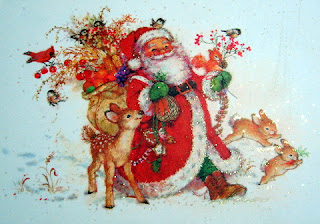 When I got older and had a family of my own I sent out Christmas cards too. Just like my mom used to do, I would go the day after Christmas to catch a sale on next year's Christmas cards. I used to buy both secular and religious cards too! Somewhere along the way I stopped looking for the expensive cards and just started buying cards that I liked. When it became trendy to write Christmas newsletters I did that too. Each year I expanded my Christmas card until it literally became a booklet! Then I got an anonymous news clipping sent to me by someone on my Christmas card list. The news clipping was of a Dear Abby article where Abby more or less criticized holiday newsletters as being nothing more than bragging. That hurt me deeply. I stopped writing newsletters after that and then I caught heck from everybody else who missed my newsletters!

Now Christmas cards are a year to year thing for me. Some years I design and print my own cards, some years I buy store bought cards, some years I write newsletters, some years I don't. Last year for the first time I sent out electronic greetings (via email) to everyone on my Christmas card list that I had an Email address for. I sent them a link to a private online photo album that I put together. I thought it was pretty cool but it didn't go over well. This year I designed my own Christmas cards and they will be printed in the next few days. I'll post the design on my Creative Genealogy blog in the next week or so. You'll see the year prominently displayed on the card ;-)

[The Advent calendar number graphic used in this post was created by NicNic at the NBK blog.]
Posted by Jasia at 2:55 AM