This is the third part of my answer to Lisa’s question, “Where was your family in 1908?” Two of my four grandparents and one set of my great grandparents were already living in the U.S. by 1908. My snapshot of their lives can be found here. My maternal grandmother was in Austria/Poland. You can read my snapshot of her life in 1908 here.

Yet in the minds of the Poles, it was “Poland” which remained the reality, whilst “Rossiya” (Russia) appeared as an alien imposition. For the patriots, Poland was Polish. “Russian Poland” was a contradiction in terms, like “Irish England” or “French Germany” or “Chinese Russia”. If they needed a label, they talked of Zabor rosyjski (The Russian Partition). [Davies p.81]

My grandfather came from the powiat of Sieradz. He was 24 years old back in 1908. He was the oldest son, single, and lived on his family’s farm. His parents, my great grandparents Wojciech LISOWSKI and Jozefa ADAMSKA were still alive and living there as well. My grandfather’s siblings… all I can say is there were many. (The folks at the Government Archives gave me a list of them, I hired a researcher who gave me a list of them, and my granduncle Henryk gave me a 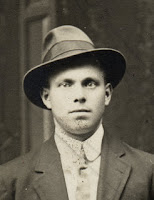 list of them… all the lists have a lot of overlap but each also contains names that the others do not!)

This is the earliest photo I have of my grandfather. It was taken in 1913 after he'd already come to America.

Several attempts were made to establish agricultural employment bureaus to serve the needs of the large landholding interests and to protect the emigrant-laborers from hardships and abuses. … By 1908, a Mutual Aid Association of Agricultural Workers (Towarzystwo Wzajemnej Pomocy Pracownikow Rolnych) was established with several provincial branches, whose purpose was to provide compensation for incapacitated and retired agricultural workers. Among its incidental functions were those of an employment agency for both specialized agricultural workers and seasonal laborers. Since it charged the employees rather than the employers for its services, it never gained any noteworthy popularity among the seasonal laborers.

The Russian authorizes, on their part, showed little disposition to satisfy the growing demands for the control and regulation of the volume and direction of emigration either to Germany or overseas.

Passport regulations governing overseas emigration were somewhat more restrictive, [than seasonal travel to Germany] since the government had due regard for its subjects as taxpayers and army recruits. Officially, the authorities tolerated overseas emigration only by way of the Baltic ports. Unofficially, however, the border authorities presented no serious obstacles. The few that could not be bribed were deceived. In the decades before the war [WWI] there developed an underground movement of emigration, conducted by professional smugglers, whose operations were known throughout the land and who were always ready, for a fee, to lend their professional services. Once across the border, the German authorities imposed no impediments, provided that the emigrant showed himself in possession of a Schiffskarte on a German ship, or was prepared to place a deposit on such a ticket. [Murdzek]

So back in 1908, my grandfather would have had the motivation and the ways and means to escape the heavy yolk placed on the Poles in the Russian partition. He would not do so however, for another four years. It was probably not as easy for him to arrange for his departure as it was for my grandmother. But he found a way!

It occurred to me, when I read the passage above about deceiving the border authorities, that perhaps that's where my grandfather's tale of deception (as a stowaway) came in. In a previous post I wrote:

My grandfather and two "friends" traveled from Poland together. When they got to their port of departure they bought passage for only two people. His two friends boarded the ship together while my grandfather stayed behind. The one of his two friends on board who was similar in age, stature and coloring to my grandfather then passed him back his boarding pass/documentation. My grandfather then boarded the ship using his friend's paperwork, explaining that he'd forgotten something, had to return to shore, and was now re-boarding the ship. They repeated that pattern whenever they needed to present their documents throughout their passage.

Maybe the stowaway tale was really a story about deceiving the border authorities when my grandfather was leaving the Russian partition and it somehow got distorted... as stories can do over time.

I have no pictures of my great grandparents to share with you but I did find this video that might be of interest. It shows some old photos of Sieradz, Poland (I think they were taken during WWII) .

The song playing in the background is The Sacred War (Священная война - Svyaschennayavoina), an inspirational song that motivated millions of Soviet soldiers to continue their struggle against the German Wehrmacht and satellite armies during WWII (1941-1945). I don't understand the point of the video, why the streets are all deserted (Because the men went off to war? Because the city was under siege?). But it's all I can find in the way of old images of Sieradz.

Davies, Norman. God's Playground, A History of Poland Volume II-1795 the the Present. New York: Columbia University Press, 1982.
Posted by Jasia at 7:44 AM