Ladies and gentleman, may I have your attention, please? I'd like to present the iGene Awards to the most deserving posts on the Creative Gene blog in 2007. I'm sure you'll agree that there have been many good posts on my blog this past year, but there are a few that I think deserve special recognition. Please enjoy these that I've chosen as my best of 2007!

In the category of Best Picture the award goes to: The photo of Christmas 1926 which appeared on the post Lucyna's Memories of Christmas, posted December 7, 2007. I just love this period photo showing my immigrant ancestors during the good times. Little did they know that the stock market would crash 3 short years later and their fortunes would be lost in the years that followed. Good thing they captured the good times while they could! 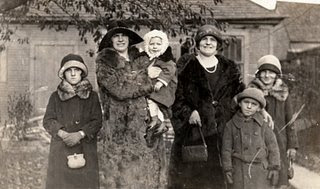 In the category of Best Screen Play the award goes to: The story of Billy

Sanders Jr. which started with WWII, One Man's Story, Part 1 of 8 posted on September 14, 2007 and continued on with seven more segments. This story of a WWII sailor would make a wonderful motion picture. I'd cast Tom Hanks as Billy because I think Billy resembles a young Tom Hanks, don't you? Hester and William Sanders (Billy's parents) would be played by Katharine Hepburn and Henry Fonda, because they were so good together in "On Golden Pond". Billy's commanding officer would be, Ernest Borgnine of Ice Station Zebra and Torpedo Run fame.

In the category of Best Documentary the award goes to: My series about Polish wedding traditions which started with An Introduction to Polish Wedding Traditions posted on September 30, 2007. This 5-part series looks at wedding traditions in Poland. It's fascinating to think that my ancestors would likely have practiced these rituals. According to Agnieszka's comment, some of these same traditions are still played out in small villages even today! (She would know, she lives in Poland ;-)

In the category of Best Biography the award goes to: Ludwika Knot Lipa, One Woman posted on March 8, 2007. I wrote this biography of my great grandmother for last year's Women's History Month. I know frustratingly little about her. I have no photos of her, no letters or diaries, no stories have been passed down. All I have of her is a picture of her gravestone and the knowledge that I probably carry some trait I've inherited from her.

In the category of Best Comedy the award goes 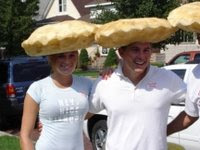 to: PierogiHeads! I still crack up every time I look at the pictures of these crazy hats. But I must admit this was a tough category to choose just one post for. Both Was Your Granny A Fanny Dunker? and Did Your Granny Wear A Bra? were close contenders. I must admit I find some of the ladies fashions of yesteryear quite amusing!

Thank you for joining me in this look back at my best blog posts of 2007. Were there others you would have chosen?
Posted by Jasia at 9:31 PM