I decided to try my hand at using the face recognition software at MyHeritage.com to see if it would give me any hints about the unknown faces in a family photo. Here's the photo that I'm working with. 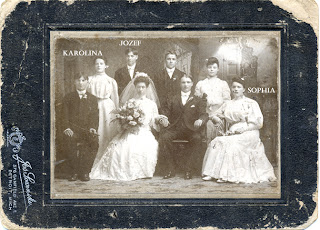 My grandfather immigrated to the U.S. in March of 1905 so the photo had to be taken after that. Karolina and Jozef were married in January of 1907. Karolina definitely looks younger in this picture than in her wedding photo so I'd guess this was a year or two before her own wedding but it could have been anytime between March of 1905 and say May of 1907 (when she would have been largely pregnant). With Karolina, her sister, and fiance in the photo it seems most likely to me that either the bride or groom was a relative of theirs or possibly Jozef's.

Karolina had 4 brothers. One died at the age of 1. Michal wasn't born until 1893 so he would have been 12-14 years old in the 1905-1907 time period. That eliminates him as the groom. Her other two brothers were born in 1898 and 1900 so they would have been in grade school at the time this photo was likely taken. So that eliminates all of Karolina's brothers as the groom.

The only other family member that I'm aware of that could be considered here is Jozef's sister, Jenny. She married in February 1909. However, Karolina would have been 7 months pregnant with her second child in February of 1909, and with her tiny waist in this picture that's virtually impossible. So I don't think the bride could be Jozef's sister. None of Jozef's other siblings immigrated to the U.S.

Having pretty confidently eliminated all the siblings of my grandparents, I got to thinking that the bride or groom might have been cousins of my grandmother (none of my grandfather's first cousins were here yet). And that's where the face recognition software comes in!

When I compared the bride to Karolina and Jozef (as a neutral party) I got the bride looking 14% more like Karolina than Jozef. A surprise once again because I think the bride slightly resembles Jozef if anything.

When I compared the groom to Karolina and Jozef I got the groom looking 21% more like Karolina than Jozef. This is what I would have guessed the connection to be by my own assessment of facial features. I think the groom and Karolina resemble each other a great deal. I'm not sure what this tells me, if anything, but it doesn't surprise me.

So what have I learned from using this face recognition software to analyze an old family photo? Not much. Certainly nothing I could use as evidence of a likely relationship. But I had a lot of fun doing it! I do think I'll look first for possible male cousins of Karolina and Sophie to be the groom before I look for female cousins to be the bride though.

What? The bride and groom could be friends of Karolina, Jozef, and Sophie rather than family? Oh please, don't even go there. That would take away my justification for continuing to play with the face recognition software at MyHeritage.com!

What do you think? Got any unknown people in photos you'd like to identify?
Posted by Jasia at 12:53 PM