Legend of the Devil's Transport

Years ago, as legend has it, a castle was to be built in Melsztyn, near Wojnicz. Stones for the foundation had to be located and suitable ones were found in the Holy Cross Mountains (Gór Świętokrzyskie). Transporting the stones from the mountains to Melsztyn was a monumental task. So a request was made to the witches on Bald Mountain (Łysej Górze) in order to achieve this. When all of the conditions were discussed and agreed upon a contract was written up on buffalo skin. It went like this: "We the witches of Bald Mountain commit to the transfer of quartz stones by our brethren of devils, headed by the chieftain Boruta, to the area where a castle will be constructed at Melsztyn . In return for delivering the stones we will receive the rights to take from the fields of the Dunajec Valley all the wicker we need to make the brooms we need for our flights. If even one stone doesn't make it to the construction site, we will not claim payment for those previously delivered. The deadline for implementation is one year from the date this contract is signed." The agreement was signed and sealed in the autumn and the plan was executed.

So the transportation of the foundation stones began. It was hard work that only took place at night and during the new moon. Despite this, construction of the castle at Melsztyn made progress. The owner of Melsztyn brought in stones for the walls. He had previously placed signs directing which way to go so that none would get lost. The devil force transported the foundation stones through the air in a straight line from the Holy Cross Mountains to Melsztyn. The route ran 2 km west of the marketplace at Wojnicz.

One night there was a horrible noise, like a hurricane, and following that the great stench of sulfur and tar. The residents of Wojnicz and the surrounding areas would not venture far from their homes. They were afraid and didn't like the terrible odor.

In mid-September of the following year the days were hot and you could feel a storm approaching. Lightning streaked all across the eastern sky. It was a rare phenomenon indeed for a storm to approach from the east! Hurricane winds sprang up and that night no one in Wojnicz slept. The sound of loud rolling thunder along with almost constant lightning made the villagers very fearful. Around midnight they heard a terrible roar but there was no lightning. Then suddenly everything became quiet. The clouds parted and the stars were shining once again. The terrible smell was no more. The merchants and craftsmen of Wojnicz immediately left for the fair in Krakow to buy more goods. The castle gates opened, the drawbridge was lowered, and the last of the carts and carriages left the city.

The road was bumpy and there were some puddles after the rain. But the earth quickly absorbed the excess water because it had been parched for a long time. The storm had been loud and strong but relatively little rain had actually fallen. The horses snorted and the coachmen and passengers of the carriages rode along singing merrily. They traveled through Piaski, Wolica, Podlesie and Śniadki approaching Biadolin. They went by the shrines of Sts. Peter and Paul along the right side of the road. Next they approached the bridge over the river Piotrówka and that's when the trouble began. The horses stood rooted to the ground and neither encouragement nor threatening motions could coax them to move on. They heard moaning sounds and began to smell a terrible stench once again. The hair on everyone's heads stood on end. There was no choice but to return to Wojnicz and notify the mayor who was a man of uncommon strength and courage. He was also compassionate to all and quick to offer his assistance to anyone in need.

The people of Wojnicz had known about the transportation of the castle stone to Melsztyn by the devils for quite some time. They immediately suspected that some sort of diabolical accident had occurred in connection with the hurricane during the transporting of the stones.

Once the mayor was awakened he immediate got dressed. The blacksmith brought along his strong chains and accompanied the mayor to the place indicated by the merchant travelers. Taking all precautions, they discovered that the storm caused the devil and his cargo of stone to be dropped near the shrines of Sts. Peter and Paul and St. Stanislaus. One of the largest stones fell near the shrine of St. Stanislaus. It was buried deeply in the ground but the tip could still be seen. Two more fell on the hill behind the Piotrówka River where the devil who was transporting them had tried his best to hang on to them. All in all, the devil had made a pretty good effort. The one thing the devil did not want to have happen was to be seen by those in hell. He'd wanted to prove something but he had failed.

The devil was bewildered and didn't know what fate awaited him. The mayor and blacksmith put him in chains and into the carriage and brought him to Wojnicz. Then they locked the devil up in a hallway where he went to sleep. After a while the devil awoke, broke the chains, and escaped. Later in the day the mayor got curious and went to check on the devil. But there was nothing there, only the chains covered in tar.

The three stones lost in the field near Biadolin were the last ones needed to complete the castle at Melsztyn. The Lord of Melsztyn was very upset that the castle could not be completed. The new moon came again but no more transporting was done. Days passed and nothing happened. But eventually something had to happen. The three stones were missing but that could be remedied with stone from elsewhere. In his heart the Lord of Melsztyn felt that the contract with the witches was broken. He completed his castle and the witches of Bald Mountain did not gain their rights to the Dunajec Valley. 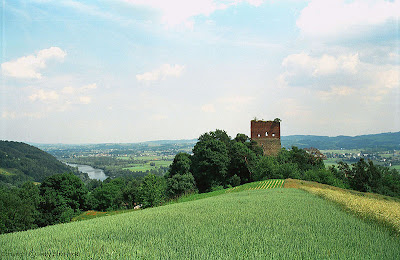 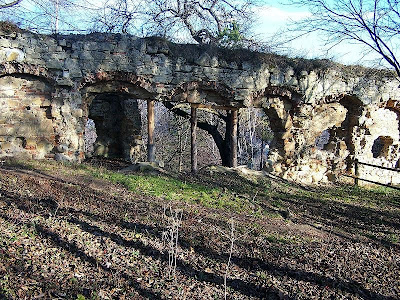 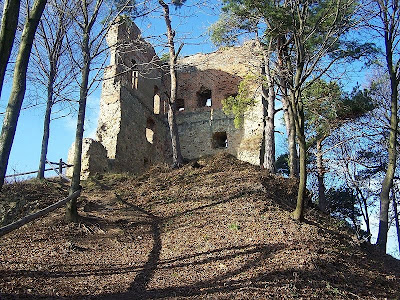 The ruins of the castle tower at the end of XIV century
Meanwhile, the devil who'd escaped from the mayor was out wandering around. He was afraid to go back to hell. Strange things could be seen happening all around him. Some trees fell and the grass became slanted appearing weak and sick. The witches doggedly sought the devil and eventually did catch him. They sentenced him to be punished for scarring the hill behind the Piotrowka River at Biadolin. But what of his fear of going back to hell? Well, he continued walking around the hill in various forms. He was seen as an old man, a gentleman, a wolf, and even a black cat. People would flee from the images of him. Finally, in Krakow, when life had gotten somewhat back to normal, it was decided to put an end to these horrors. There was a statue of Mother Mary with Child on a stone pillar. This column was placed with the other figures at the shrines of Sts Adalbert and Stanislaus, east of St. Margaret's, west of St. Joseph and from the north St. Tekla. Lime trees were planted in the area as well. The two stones that never arrived at the castle Melsztyn were left at the east and west sides of the religious statues and to this day you can still see them. But the devil roamed the area no more.

The 3 photos included are from Wikipedia. Permission is granted to copy, distribute and / or modify this image under the terms of GNU Free Documentation License version 1.2 or later, as published by The Free Software Foundation.