The Legend of the White Horse

In the town of Wojnicz, there was a castle surrounded by a water-filled moat and a drawbridge. A gentleman reveler, having had his fill of beer and wine, headed in the direction of his manor house in the village of Wielka Wieś riding his gray horse. He'd spent the whole day at the inn playing and drinking. The sun was getting low behind the mountains to the southwest. Dusk was falling and with it came a thick fog. The gentleman had to leave the town before sunset because that's when they would close the town's gates. Lying just beyond the gates of the city was the outer village of Zamoście which had a brewery, a nearby inn, and a Jew (only Jews could serve alcoholic beverages in Poland in the days of old). He imbibed more at the inn and got to the state where he was feeling so good he had to rely on his horse to find the way home. 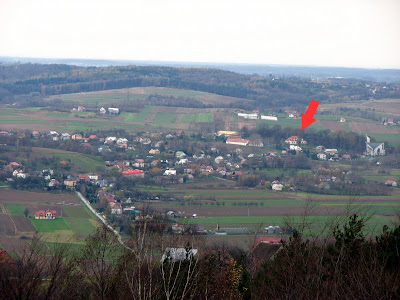 A view of Wielka Wies. Arrow points to Manor House.
The road ran by a narrow marsh. Along the way bats flew from the forest, frogs croaked in the swamp, and the sounds of wild beasts could be heard in the distance. Almost immediately in front of the manor house, a howling devil wolf appeared. The horse reared and threw the drunken gentleman off its back such that his leg became entangled with his lance. His leg broke and he would undoubtedly have died, torn apart by the devil wolf, if the housekeepers had not heard the commotion. 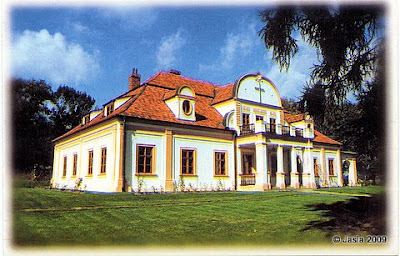 Close up of Manor House
Barking dogs awoke everyone in the manor house and the servants came running. Their first sight was a horse with no rider. Then they discovered the drunken gentleman with his broken leg and immediately brought him inside the manor house. A healer was sent for and when he arrived he began treatment right away. The gentleman's recovery took a long time. While he was convalescing, he vowed that if he made a full recovery he would build a shrine to St. George, the patron saint of knights (it's believed that the gentleman probably was a knight). After that, the gentleman's recovery went along more quickly.


The fresh air of the pine forests helped his recovery, as did the healing spring waters. Once he regained his health and strength, the gentleman made good on his vow. At the scene of the accident, he put up a carved stone statue of St. George, which still exists along with a granite relief in the shape of a chapel with columns. Soon afterward the gentleman wanted to pursue his amusements again. He'd become bored with life in the country and wanted to go abroad. In the mean time, he'd been issued a challenge to a duel by an Italian gentleman he'd managed to offend on a previous trip to Italy. He agreed to meet the Italian on neutral ground, in Brazil. Unfortunately, luck ran out for the young master of Wielka Wieś.

He was killed in the duel and his remains were brought home and buried in the family tomb in the cemetery in Wojnicz. He had taken his favorite horse with him to Brazil but the horse was not returned with his remains. A short time later strange things began to happen at the manor house. On a clear night, when the moon was full, just at the stroke of midnight a white horse without a rider appeared in the courtyard in front of the manor house. Silence fell across the forests and the swamp. Even the dogs didn't howl at the moon. The wind stopped blowing and the image of the white horse could clearly be seen. He circled the courtyard three times then disappeared. This phenomenon was observed by the night watchman. He noticed that after the horse disappeared a human figure appeared. He would make his way from the center of the courtyard to the statue of St. George and back uttering dreadful groans. Then he would disappear somewhere in the park. The echo of the groans could be heard in the mountains.

On the manor grounds there was a blacksmith shop. The blacksmith and his helpers shod horses and repaired farm equipment. One day, at noon, when the sun was beating down mercilessly on them a man in gentleman's clothing arrived on a white horse. The blacksmith asked him if he wanted him to look over his horse since it appeared he had been on a long journey and was limping. In the process of the examination, the horse's master was carelessly struck with a hammer in his finger. At that point, the earth opened up and swallowed up the horse and rider and neither were ever seen again.

Photo 1: (photo of the village of Wielka Wies) Permission is granted to copy, distribute and / or modify this image under the terms of GNU Free Documentation License version 1.2 or later, as published by The Free Software Foundation. Obtained from Wikipedia.
Photo 2: (postcard of manor house) This post card was sent to me by my cousin in Poland. No information given on the photographer.