The Legend of the Stingy Heir

Continuing with the legends of Wojnicz, Poland, next we have two legends concerning the area of the Zamoście estate.

According to one legend, at the site of today's 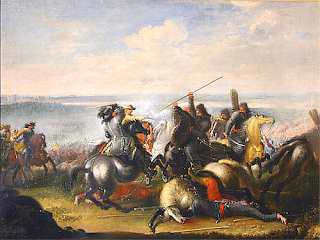 village there used to be three small settlements: Upper Zamoście II, Skrzynki, and Lower Zamoście I. The residents of this area were referred to as Trójnik. The area was ravaged by the Swedes in 1665-1660, and after the war with the Swedes a new city emerged. It was named Wojnicz. The echoes of this legend remain until today as is evidenced by these names of Wojnicz's suburbs.

Another legend tells of a stingy estate owner and it goes like this. Those that lived long ago in Wojnicz reported that the owner of the Zamoście estate was a very stingy man. He never did anything to help anyone and never shared what he had with others. Servants and local residents were very fearful of robbers, known as the Madeja. Robbery was severely punished back in those days. Some who were caught were even punished/tortured on the "Madejowe bed". But not the owner of the Zamoście estate. Even though he was known to put things in his grain to make it heavier so that when he sold it at market it would bring in more money, he was never punished. He never changed his cunning and stingy ways and eventually he died. 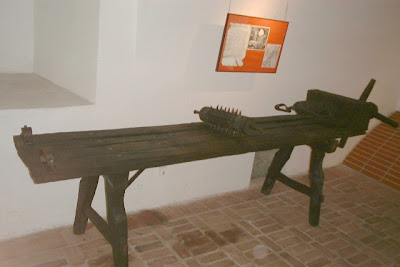 After his death, every night at midnight in barns and graineries in the area of the Zamoście estate, the doors would open and then close with a big bang. People would check to see if thieves were responsible but no one encountered any. Dogs calmly walked around the area not at all alarmed. Time went by, years passed.

One moonlit night a watchman went to work guarding some cattle. He saw a white figure of a man standing nearby. Frightened, he retreated a ways and from afar he asked, "Who's there?" He heard a voice respond, "I am a former owner. I've repent now for 70 years for my stingy ways. Oh if only someone would take pity and order 7 masses. Then my penance would end. Otherwise, I will still suffer for 70 more years." Then the figure disappeared into the moonlight.

The watchman went totally gray with fear. In the morning he told his master about his night time adventure. The masses were ordered at the church of St. Lawrence in Wojnicz and from that moment on the night-knocking in the area of the Zamoście estate ceased.

Sources:
Legends of Wojnicz
Madejowe Bed
"Deluge" Invasion of Poland by the Swedes

Photo 1: Swedish King Charles X Gustav in skirmish with Polish Tartars near Warsaw 1656 by Johann Phillip Lemke (1631 - 1711). In the public domain.
Photo 2: Poland, Zywiec - Museum of Torture - torture bed (so called Madejowe Bed). This file may be copied and distributed, and to make derivative works provided that an appropriate information about the author and provided to distribute a file under the same license, or under a similar license or compatible with CC-BY-SA. Contributor who supplied the photo was "Merlin".