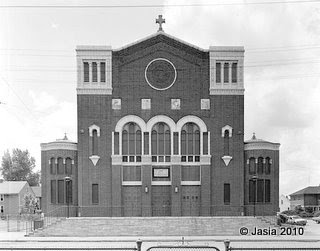 The building was torn down in July of 1981 to make way for the General Motors Poletown plant.

In 1985, Immaculate Conception Church was the only Polish parish in the metro Detroit area to have been closed. The people of the parish were very bitter about the closing and their own relocation. Little did they know that soon to follow, in 1989, seven other Polish parishes would close.

For more information about the closing of this parish visit this web site.

To view an extensive collection of photographs and detailed information about this church, visit the Library of Congress American Memory web site.

Golden Jubilee book, 1919-1969 for this parish is cataloged and searchable on the PGSA web site.