As I gazed at her in the hospital bed I thought of all the years of life she'd known. It was there on her face, the joy lines, the pain lines, the worry lines, the sad lines. Between the lines was the peace she'd known. There wasn't as much of that as there should have been.

She gazed out the window with a blank look on her face as if she was in another place. And she was. She was there in body but her mind was caught up in memories. I knew what her memories were because occasionally she would look at me and speak as though we were in the midst of a conversation. She'd tell me what was happening, "I'm going to pick up Ma and take her shopping", and then she'd turn her head back to the window and travel back down memory lane. Ma and Pa, her mother and father, were the people she spoke of most often and I assume they were the faces she remembered the best. For the most part, the addresses on memory lane were happy, contented places. Usually they consisted of ordinary activities on ordinary days. But on occasion, she'd become anxious or agitated and I'd know that that particular memory address was upsetting to her. It was then that I felt the need to intervene and try to redirect her thoughts.

It sounds like an easy enough thing... redirecting someone's thoughts. Just ask a question on another subject or make a comment on the weather. Except that in the case of someone with Alzheimer's Disease the brain just doesn't function the same way it does for the rest of us. It's cruising down neural pathways that have no exit ramps. Her face will turn to me but the expression says, "What kind of nonsense are you saying?" My redirecting comment/question doesn't make sense in the context of the imaginary conversation she is having in her head. So with a bit of a scowl on her face and a shake of her head, she conveys to me her disgust and goes back to gazing out the window and resuming her trip down memory lane.

I gave some thought to the situation and wondered what I could do to comfort her when the memory trip stopped at an upsetting address. Trying to bring her back to the present didn't work well. I was not yet born during her youth and couldn't share those memories with her. Or could I? It occurred to me that I'd recorded many of her memories in the course of my genealogical research. And I've scanned oodles of old photos on to my hard drive. Why not review some of those notes and show her some of those photos? Maybe that would reach her in a more meaningful way than trying to redirect her to the present situation.

I gave it a try. I printed some photos and I grabbed a copy of Detroit's Polonia. The next time I visited her and her mind took that inevitable trip down memory lane I pulled out the photos... and boy did that put a smile on her face! She studied those photos and pointed to each person in them. Some she could identify and some she asked about. But all the while she was happy. I pulled out my notes about the stories she'd told me of her younger days. I asked her about the people and places she'd mentioned years before when her memories were crisp and clear. Sometimes she'd smile, sometimes she looked puzzled, but she never got angry.

When she finished looking at the photos and once again drifted off down memory lane I pulled out Detroit's Polonia and gave it to her. At first she just started flipping the pages but it wasn't long before she recognized a building here and there. Then she started looking intently at the people pictures and in almost every group photo she saw someone she thought she recognized. And that would lead to a story about them, usually a happy memory but on occasion she'd whisper something scandalous with a bit of smile on her face as if she were sharing a juicy bit of gossip. This was a way to connect with her on her own neural pathways. It was obvious she was both happy and comforted by the photos. The fruits of my genealogical research (and of the contributors to Detroit's Polonia) were therapeutic for her. More than just an interesting read, the book's photographs more or less brought the past to the present for her. This was the place she could relate to!

I'll have to review and print up more of my research and photos for her. I'm convinced it will provide her with a great deal more pleasure while she continues to live out her life in the past.

Update: I did print out more photos and created photo collages and scrapbook pages that I framed and hung on the walls of my mom's room at the assisted living facility where she lived out the last months of her life. I like to think that those photos brought her some peace and happiness in her world of strangers and faded memories. 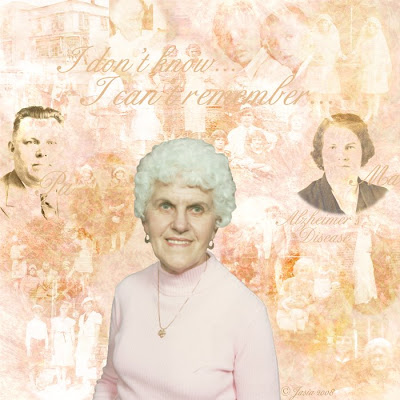