Ken's Diner is an authentic 1950s era diner owned and operated by Ken Decker. It resides in Birch Run, Michigan (on route to Frankenmuth, MI from Detroit).

Fabricated in New Jersey, the Jerry O'Mahony diner was considered the "Cadillac" of diners because of its all steel frame construction, quality materials and craftsmanship. The company produced 2,000 diners from 1917 until 1941 when production was suspended during WorldWar II. A few hundred units were built following the war until operations ended with bankruptcy in the mid 1950s. It is estimated that less than six diners of this model are functioning today.
Ken's Diner is one of the very last... 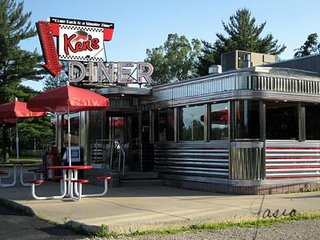 This place is a real beauty and the owner loves to talk vintage automobiles. Entering Ken's place is like walking into another era, a simpler time as Ken likes to say. 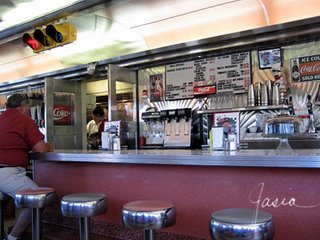 The ambiance here is just wonderful. We just stopped for pie (pecan) and coffee and to listen to the juke box. I kept waiting for the Richie and gang from Happy Days to come strolling through. 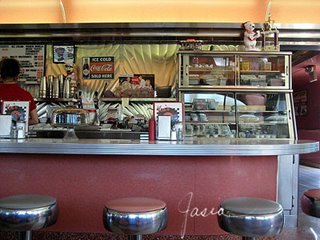 Frankenmuth is popular tourist destination, a quaint German/Bavarian village about a 90 minute drive from the western suburbs of Detroit. Many metro Detroiters "make a day of it" by heading up to Frankenmuth for one of the world famous chicken dinners served at the renown Bavarian Inn or Zenders. Driving up there, we always pass Ken's Diner and I always say, "One of these days I want to stop in there". This summer on our way back from a day trip to Frankenmuth we did. 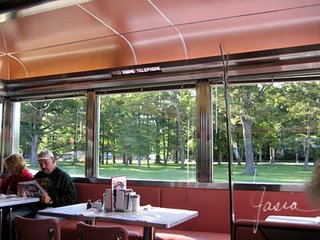 Here's the view out the windows, which are so clean you almost forget the glass is there. 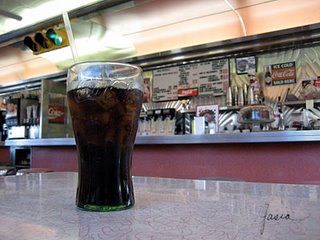 Coke never tastes as good as it does in an old fashioned Coke glass... just the way they serve them up at Ken's.

If you're in the neighborhood, or just looking for someplace "different" to go, take a ride to Birch Run and stop by at Ken's for a snack or a meal. The food is terrific, the old juke box is a trip down memory lane, and you'll probably be treated to a peak at an old car or two while you're there. Check it out for a good time!