My NaNoWriMo Novel for 2006

I've decided on the story line for what will be my NaNoWriMo novel. I have to confess, I'm going to do exactly what I said I wasn't going to do after last year's experience... I'm going to write about my family again. But it will be different this time! At least I hope it will be.

Writing my first novel last year was a wonderful experience. I enjoyed it more than I ever thought I would. I learned a lot from it and I hope this year's novel will be even better.

Last year I wrote about my maternal grandfather's life from the time he immigrated to America (1912) until his death (1956), including the 2 world wars. I used real people almost exclusively and included as many family stories as possible. It was important to me to keep the integrity of the people and the stories. So the book was much like a biography except that I used a great deal of fictional dialog to carry the story along and I had an actual plot line (created) woven through the characters and family stories. My thought was that I wanted to produce an interesting family history, one that people would pick up and read and enjoy even if they didn't know the people involved. In my mind, it was fiction based on a lot of facts (and in this case people) similar to classical historical fiction.

I was intending the novel to be a supplement to the actual hard facts that I discovered about my grandfather's life and his ancestors in the course of my genealogy research. I can click a button and "print" a copy of his family history in my genealogy software program any time I want. But that history will be big on facts and short on stories and flavor. So this novel then was intended as a go-along piece. And I believe I was successful in my endeavor, though it still needs a rewrite before it gets published.

When I met with other NaNoWriMo participants last year, it quickly became apparent that I had challenges different from theirs. They didn't have the constraints of trying to keep stories intact and not altering them to move the plot along or enhance the drama. They had the freedom to give their characters traits and motives that lent to their "good guy" or "bad guy" role. Because I wanted to keep my characters true to themselves I couldn't do that either. All writers have their challenges and I was no different. But when I finished my novel I vowed that my next novel would be all fiction all the way... fictional characters, fictional setting (contemporary romance, I thought... I love reading steamy romances so writing one would have to be fun, right?), and lots and lots of creativity. And now I'm going back on that vow.

This year I'm going to write about family again but with a twist (or two). I'll be writing about my great grandparents on my father's side of the family. Like last year's novel, it will be about their lives from the time they immigrated to America (1881) until my great grandfather's death (1916). But unlike the novel I wrote last year, this one will be much more fictional. For one thing, I don't have a single photograph, description, or story about these people. All I know is the bits and pieces of their lives I've been able to put together with documents discovered in the course of my genealogy research. I'm planning on using their names and actual event dates (birthdates, marriage dates, property records, church records, etc.) but their personalities will be entirely fictional. I know where they lived and what was going on in their lives from research I have done and am currently doing about the area where they lived. But I have no family stories to include so I will create stories lines and put my grandparents when and where I want to without the constraints of last year. :-)

I'm excited about the prospect of writing again and am enjoying the research I've been doing for the past week or so since I tentatively decided on the subject for my novel. (More to come on my research in another blog post.) I have just a little over a month to get as much groundwork laid for my novel as possible. Because once I start writing, there won't be any more time for research. What I don't know, I'll have to create as I go and change in the rewrite if necessary. That's both the advantage and disadvantage of writing for the NaNoWriMo. The one month deadline becomes both your friend (from the time you start the end is in sight ;-) and your enemy (have to push on even if you've changed your mind and want to do something entirely different because what you have so far isn't coming out the way you thought it would :-( 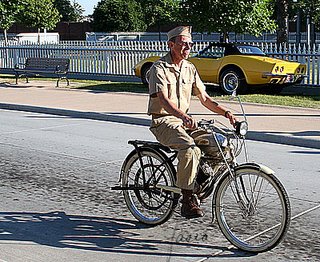