Reflections on Writing My Family History

I didn't include my experience of writing my family history in the recent Carnival of Genealogy because quite frankly I forgot that I had a story to share on the subject. Reading Randy Seaver's blog post about his experience reminded me that I'd intended to share my experience and reflections about it. So I'm going to do that now.

I stumbled onto the NaNoWriMo web site sometime during the month of October 2005. NaNoWriMo (National Novel Writing Month) takes place in the month of November every year so by the time I found out about it, it was almost time for the contest to start. I'd long been thinking about writing my maternal grandfather's history in novel form because he had an interesting life that asked to be written with passion and excitement. I knew I wouldn't need to add much fiction at all to make for a good read. I can't say that about any of my other family members who led much more ordinary lives. But this guy's story just lent itself to a novel in my mind.

Like a lot of people, I'd been procrastinating about writing up any of my family history even though I've basically been done with my research for a couple-three years now. So discovering this online writing contest seemed like a great opportunity to take advantage of. I didn't have much time to prepare to write. I did make a good outline and wrote up character sketches of the main characters and their traits, but that's about all I had time to do. I certainly didn't have time to review all my genealogy research or organize it. But hey, what are rewrites for anyway? Corrections and details can get added or subtracted during the editing process. So I jumped in.

And I found that I loved the creative writing process! The month of November flew by and I spent all of my spare time at the computer writing my novel. It went surprisingly smoothly, until about half way through the month. I discovered that the marriage date of one of my main characters was in error... by only one year but that one year meant I had to scrap the direction I was going with the story and figure out what to do with the character instead. That sort of took the wind out of my sails for a couple of days but then I got back up to speed and finished the novel.

Of course now that I have the correct marriage date for that character (I got the marriage record in March, 3.5 months after the contest was over), the story can't stay the way it was written. I have to do a major rewrite to the entire second half of the book but that's OK. It was good practice and I'll know better what to do next time. It's one of those things that happen when you write historical fiction. You can invent characters to weave in and out of historical places and events but you can't change the dates that the real historical events happened without looking like a real idiot. So I'll rewrite the story to keep it real. One of these days ;-) And then I'll self publish it.

Here it is September already and another NaNoWriMo will be starting up in just 8 weeks. It's time for me to start thinking about what I want to write about this year. I don't think it will be another chunk of my family history because there isn't another family member whose story would lend itself to being a novel. I'd have to add too much fiction and then it wouldn't really be a family history, just a story with character names and dates from my family tree. And that seems like a bad idea.

I do have three other grandparents whose histories need writing but I haven't made any decisions on how to go about that yet. I have many thoughts on the subject though. I'll share those with you tomorrow. 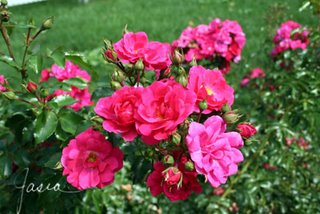