Here's a tombstone picture you shouldn't be seeing. I'm feeling guilty about showing it on my blog because of something the cemetery caretaker said to me. I'm sharing it with you anyway because it is the most spiritual and elegant tombstone I've personally ever seen. I've seen tombstones and crypts that were larger and very grand looking but none quite so apropos to its resident.

Buried here is RT. REV. JAMES G. DOHERTY, LLD. I think there were more details about him on the tomb but I was afraid to get out of the truck to go check it out. I didn't want to draw attention to myself. There was a security guard parked just across the street from the tomb. So I just opened up the sunroof, stuck my camera up and hit the shutter hoping for the best. I don't mean any disrespect to this obviously religious man so I'm sharing this photo with you anyway. But I have to admit that I have some conflicted feelings about it now.

The caretaker (I'm using that term to mean the gentleman who I spoke with in the cemetery's business office) told me that taking photos in the cemetery was prohibited out of respect to the families of the deceased. He went on to explain that some might find it offensive to have the gravesites of their loved ones photographed. I was caught off guard and didn't know how to reply to that. I've never heard of such a thing. He told me that if a security guard saw me he would report me to him. I was nothing less than surprised. Am I just ignorant or is this a common cemetery policy? Have any of you come across this sort of thing before? 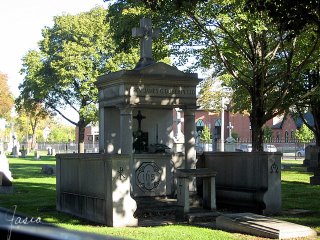