I Got A Kitty!

One of my Christmas presents from my sweetie was a kitten, or more precisely the promise of a kitten. My dear, sweet Circe died last June and I've really missed having a kitty in the house. So I was told I could pick out a new kitten (or cat) from a local animal rescue organization as soon after Christmas as I was ready to do so.

Since Christmas I've made several trips to local animal rescue organizations and the local Humane Society in search of just the right kitten. I was determined to pick my kitty by their personality not their looks or their age. The only stipulation I had was that I wanted a male. My last two cats were females, strays that adopted us rather than us choosing them. They were wonderful cats but never as affectionate or as playful as my friends' male cats. So this time around I was determined to find a male kitten that was both playful and affectionate (meaning they didn't try to jump down as soon as I picked them up). Today I found my kitten.

Meet Vladi. He's 16 weeks old and the cutest little bugger you'll ever meet. He has orange and white fairly long hair and golden eyes. And best of all, he's the best kitten for me! He's very playful and very affectionate... just the right combination of both. He's just adorable! 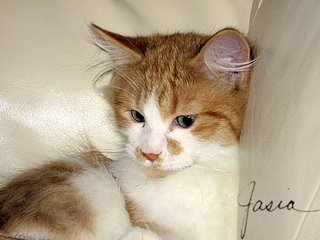 The rescue organization named him Jesse, which suits him now but I don't think it will suit him when he's full grown. So after much thought and deliberation I've decided to name him Vladi (short for Vladislav... the English spelling of a good Polish name ;-)