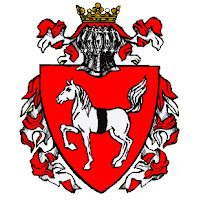 My great grandmother, Ludwika KNOT, was born on July 6, 1857 in house number 74 in the village of Bobrowa, Poland. She was baptized at St. Anthony of Padua Catholic Church in Nagoszyn, Poland and a copy of her baptismal record is viewable here. I don't know much about her early life in Poland except that her parents, Szymon and Katarzyna KNOT, were farmers in the village of Bobrowa and she had 6 siblings (2 older brothers, 1 younger brother, and 3 younger sisters). As far as I've been able to determine, she was the only member of her family to immigrate to the United States.

On November 15, 1876, at the age of 19, Ludwika married Szymon LIPA (age 34) also at the church in Nagoszyn, Poland. Three years later, on October 8, 1879 she gave birth to Katarzyna, the first of her 11 children. Before she and her husband would leave Poland for America she would give birth to another daughter, Marja.

Ludwika, her husband, and two daughters arrived at the port of Philadelphia on May 20, 1881 aboard the SS British Queen. Once in America, the family made their way to Detroit, Michigan. They bought a house at 57 Superior Street, in the east side Polish neighborhood near St. Albertus Catholic Church.

Ludwika lived at the house on Superior Street until her death on May 30th, 1912, attending first St. Albertus Church and then becoming one of the founding families at Sweetest Heart of Mary Catholic Church. She was buried at Sweetest Heart's parish cemetery on June 3rd, 1912. She was 54 years of age at the time of her death and the cause of death listed on her death certificate was apoplexy.

There was no occupation listed for Ludwika on the 1900 or 1910 census records so I assume she was a housewife and mother.

Ludwika gave birth to 12 children (9 survived to adulthood) and had 29 grandchildren, 16 of which she lived to see. I have no pictures of Ludwika to share with you. I have never seen or heard mention of a photograph of her by family members. I have no photos of her house either. What I do have is a longing to have known this woman. I created a life for her in my novel, Hear the Linden Tree. I'd like to think she had as much passion in her real life as I created for her in my novel.

Even though the village of Bobrowa was very small (pop. 0f 943 about the time Ludwika left for the U.S.), and it's not a big city even now (current pop. 1400), there are a couple of web sites about it. As you might guess, they are written in Polish. But you can still click around the sites and see some photos of the area. The first site was done by an 18 year old young man who lives in Bobrowa (which in Polish means "beaver"). The second site is one created and maintained by the local school administration in Bobrowa (I think). It has a nice history of the village, unfortunately I can't read it. It is interesting that when I click around the school staff and employees I recognize a good many surnames from my family tree (including LIPA). My frustration at not being able to read Polish is great.

Regarding the coat of arms shown in this post: STARYKON is the name. Evidently some KNOT family members used this coat of arms although most certainly not my family since they were commoners from the peasant class. I just put the crest on the page for visual interest ;-)
Posted by Jasia at 10:00 AM