I think it's wonderful that so many genea-bloggers spent time this Memorial Day weekend writing tributes to their family members who have served in the armed forces . I don't come from a line of military families, at least not that I know of. Both of my grandfathers were born in Poland in 1884 and immigrated to the U.S. in the 1900-1910 time frame. They were too old to serve in the military in WWI. I may have a long line of distinguished ancestors who served in the armies of Poland/Austria/Russia but I don't have access to any of those records or the ability to translate them even if I did. I do have two uncles and two second cousins who served in WWII and a brother who served two tours of duty in the Vietnam conflict. But as far as I know that's it for military service in my family.
But on this Memorial Day I would like to take a moment to remember one particular member of my family, my uncle, Edward Lasky. I don't know much about his miliary service other than that he was a part of the D-Day landing at Normandy. He survived the battle and the war and came home with a bride from France. He picked a real character when he picked Renee for a wife. She's one of those outspoken types with a heart of gold. Here is their wedding picture: 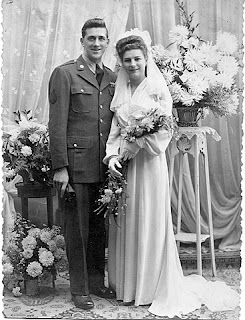 Here's a newspaper clipping that tells an interesting story about him. It was written the week he died though it's not an obituary. Click on the image below to view larger.

To Uncle Eddie and all the men and women who have served our country with honor, I salute you.