Remembering a Troubled Man Who Adored Me

My dad was a hard man to like and an even harder man to love. My mom and my brothers did their best to love him but most of the time all they could manage was the kind of respect you'd give a snarling grizzly bear. Which is to say they did their best to stay out of his way as much as possible, especially when he was drinking. I tried to avoid him when he was drinking too but the rest of the time it was easy for me to love him.

My dad was born in Detroit in 1914 to a father who had immigrated from Poland in 1905 and a mother who was born in Detroit of parents who immigrated from Poland in 1881. He was the 5th of 11 children. His father, my grandfather, struggled to get by doing odd jobs including shoemaker, selling penny candy from his home, moving evicted people from their homes during the depression (he had a horse and a wagon), and occasionally picking up work as a day laborer on work crews. My grandfather had a lot of mouths to feed so as each of his children got to the age where they could contribute to the support of the family (which he deemed to be the age of 12) they were required to quit school and get a job. 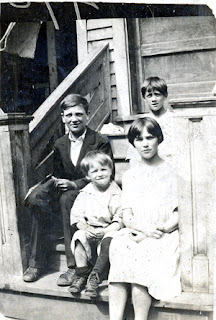 This photo was taken in 1927 when my dad was 12-13 years old. He's he one in the dark suit with his hat in his hand. His sister Genevieve is sitting to his right, age 11, his brother Edward is seated behind him, age 9, and his brother Eugene is seated below him, age 3. I believe the picture was taken on the steps to their home on 35th Street in Detroit. This is the only photo I have of my dad as a child.
So at the ripe old age of 12, and with a 6th grade education, my dad had to find a job. His first job was peddling newspapers on Detroit street corners. Later he worked on day labor crews. My dad was always tall for his age (6'3" as an adult) and had a muscular build so people often thought he was older than he was and would hire him for his strength. Like his father, he worked at various odd jobs until 1932 when he got a job with General Motors. He worked at various GM plants until the year before he died (1973) when he took a medical retirement. He did get drafted into the U.S. Army during WWII but barely made it through boot camp before he was given a medical discharge. Once out of the army, he resumed his employment at GM.

My dad had what you might call an antagonistic personality, meaning he was quick to get into fights. He was also a mean drunk. He had a well-earned reputation as a barroom brawler in the neighborhood he grew up in and by the time he met my mother he was missing half his teeth. Someday I may write about how my parents ended up married (no, mom wasn't pregnant)... but for now I'll go on about my dad.

My parents married in January 1944 and had my brothers in 1945 and 1946. I'm much younger than my brothers and I'm certain I wasn't planned (not that anyone did much planning back in the days before birth control was readily available). But from the day I was born I was my dad's favorite. It was no secret, it was obvious to all but me (I was just a little kid, what did I know?). To my brother's credit, they have never shown me the least little bit of resentment. I have to give them a lot of credit for that. My mom, well, there was definitely some resentment there. But I can't really blame her for that. 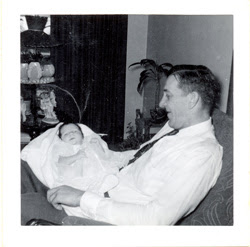 Here's a picture of my dad adoring me ;-) The photo was on the day of my baptism. I don't recognize the setting.
Dad was a hard worker and was quite intelligent. You would never have known he had such little formal education. And while he didn't read for pleasure, he definitely read for content. He would check out repair manuals from the public library and literally overhaul a car engine. He was very good at working with his hands... finished the upstairs in our house, grew the second best roses in the neighborhood (the lady across the street was a member of the city's garden club ;-), was always tinkering with small engines (lawn mowers) and repaired television sets (back in the days when they had tubes). He was a strict Catholic and went to church every Sunday and Holy Day. He loved fishing and being by the water. And he spent a lot of time with me.

My dad was kind to me. If he took me somewhere, he'd buy me an ice cream or a soda pop. He'd never ignore me and he always tried to include me in conversations when we visited with others. He was pretty good about driving me places I wanted to go too. For a few years there, I'd say roughly maybe 6th grade thru 9th grade, I had a real passion for horses and horseback riding. He was always happy to take me for riding lessons or just sit in the car while my friends and I went riding at a local stable. He was happy to take me to a local beach to swim in the summer or to a skating rink to ice skate in the winter. I guess you could say we were buddies, he and I. I'm sure we must have talked about a lot of things during all that time we spent together but I don't specifically remember any of our conversations.

My dad died when I was 17 years old. To tell the truth, I barely remember him anymore though we spent a lot of time together when I was growing up. It's unfortunate that most of my memories are of the high drama times in my childhood when he was drinking, violent, and creating mayhem in our lives. He wasn't always mean and hurtful, but those are the memories that are the most strongly imprinted in my memory. I never understood why he kept drinking when it was so obvious that it was causing pain and heartache for everyone around him. We all begged him to stop at various time but he didn't stop until his health began to fail him. He died at the age of 60.

It wasn't until I was a bit older that I was able to understand why he drank. It was when I was in graduate school that I learned about anxiety disorders. Once I'd had some classes on diagnostics (several years after he'd died) I was able to recognize that he'd suffered from anxiety and panic attacks. Back in the old days such things were referred to in our family as "nerves", as in... "Joe's nerves are bothering him again". He would never have sought medical treatment for his "nerves" because back then people would have labeled him as "crazy" for seeing a shrink and weak for not having nerves of steel. So drinking for him was a means of self medicating. Once I realized that, it was pretty easy to forgive him for all the pain and heartache he'd caused our family. He'd been coping the best that he could. Anyone who's ever had a panic attack knows you'd do just about anything to avoid (or minimize) having it happen again. I know this from personal experience.

When I started doing my genealogy research (about 10 years ago), I discovered that anxiety disorders ran in my dad's family. After doing extensive interviews with family members, a pattern began to emerge. Not only did my dad suffer from anxiety but so did 6 of his siblings. His 4 brothers were all effected and found various ways of coping (some also self medicated with alcohol). And at least two of his sisters have also confirmed to me that they've had to take "nerve pills" (Valium) for anxiety attacks. It didn't end there either. Both my brother and I, as well as at least 2 of my cousins, have had to deal with severe anxiety attacks. And if we look in the other direction, I've found living relatives of my dad's in Poland (from his father's side of the family) and they too suffer from severe anxiety attacks.

Now as a professional, I'm aware that anxiety is a fairly common disorder. But to have so many people in one family present the same situational triggers for panic attacks (to the point of agoraphobia) is just too numerous to pass off as a "normal occurrence in the population". I'm convinced there is some sort of genetic something-or-other that predisposes us to bouts of severe anxiety. These days it's not so shameful to admit to having anxiety attacks and there are a variety of treatments to cope with them. I only wish the same had been available to my dad. I can't help but wonder how different our lives would have been if not for his anxiety/drinking/abuse cycles. I know that my dad felt remorse for his bad behavior, he wasn't without a conscience. He just didn't have a better way to cope with an affliction that he was probably born with a predisposition to.

And so this Father's Day I will try to remember the quality time dad and I spent together. I will look over the few photos I have of him and feel sorry for the little boy who had to drop out of school and sell newspapers on a street corner, the young man who had very few friends because of his bad drinking behavior, and the husband and father who couldn't find a better way to deal with his anxiety than to turn to alcohol and become mean to those who would have loved him. I know that he was only human and he did the best he could. There is no bitterness in my heart this Father's Day, only love and understanding for a troubled man who adored me.

Has anyone else come across family patterns of mental illness, personality disorders, or substance abuse in the course of their genealogy research?
Posted by Jasia at 9:09 PM