Michigan State Fair... Were Your Ancestors There?

I went to the Michigan State Fair today with the intention of looking for the sorts of entertainment my ancestors might have enjoyed at fairs in their day. I didn't have to look too hard. The simple livestock competitions, food vendors, and craft displays popular in the old days were still there in abundance!

Fairs have always been popular entertainment events. Not only did they provide an opportunity for folks to gather 'round and socialize but they also allowed them to show off their livestock, field crops, hand crafts, and baked goods. Often, there was music and dances at the fairs as well. In later years, carnival rides and midways became popular additions. Some fairs were traveling shows. Some were held on the county level. But the grand daddy of them all is the state fair.

The history of fairs goes back to the Roman times. But the history of state fairs goes back to 1849 in Michigan. Yes, Michigan. The Michigan State Fair is the oldest in the country having begun only 12 years after Michigan attained statehood. In it's early days, the Michigan State Fair rotated locations each year to various hosting cities around the state. In 1905, J. L. Hudson (of the department store fame) donated 135 acres of land to give the state fair a permanent home. The fair grounds is located 7 miles from the heart of the city of Detroit. Back in those days, it was rural country. Today it is surrounded by residential and commercial establishments in Detroit and it's neighboring suburbs just across Eight Mile Road to the north.

From the very beginning the state fair was intended as an agricultural show.

Exhibits were varied: an entire building, Mechanics Hall, measuring 50 x 100 feet, was given over to farm implements and machinery. Another building was reserved for domestic products, including ladies' needlework and dairy products. A Chicago lady's quilt was made of 9,800 pieces and depicted the sun, moon, stars, rivers and lakes, a storm, and a rainbow, among other scenes. A much-admired piece of embroidery represented Pharoah, his cup bearer, and his wife, interceding for the Jews.

Mrs. J. Jones of Dearborn won a prize for the best pair of ladies woolen stockings. Mrs. Frederick Buhl (grandmother of Walter Buhl Ford) took first prize for a patchwork quilt. H.R. Andrews of Detroit won the plowing match, plowing one-quarter acre in 43 minutes. He won $10. John G. Morse of Ann Arbor was awarded a prize for an essay on "The Culture of Wheat." [More]

The fair grew over time and more events were added:

By 1865 the fair was well established; the livestock exhibited included a great variety of cattle: Devon, Hereford, Ayreshire, Galloway, Alderney, and Shorthorn. The best team of oxen, consisting of five yoke, won $50. Sheep, swine and poultry were all thrown in together, with Angora goats added for good measure. The best pair of wild turkeys won a $2 prize. There was a whole class of awards devoted to stoves -- the best cooking stove, for either wood or coal; the best hall or parlor stove, the best self regulating stove for the parlor. The best "furnace or other apparatus for warming homes" achieved a silver medal. [More]

In 1928, the upper peninsula of Michigan began a separate fair of their own, The Upper Peninsula State Fair. That fair is held in Escanaba and continues to this day.

The Michigan State Fair has run almost continually since it's inception, but it was not held from 1942-1946 during WWII.

So, enough about the history. Let me tell ya about my day at the fair today...

I had fun trying to find the kind of exhibits my grandparents and great grandparents might have enjoyed in their day. I have no doubt that they attended the state fair with their families. My ancestors were farmers back in Poland and became "city folk" only when they came to America (first in 1881, then 1905, 1912, & 1913). So seeing all the agricultural displays would have certainly been interesting to them and no doubt would have reminded them of their homeland. I'll bet there were stories told to the younguns about plowing the fields and milking the cows back in the "old country" as they watched demonstrations at the fair.

When I saw the fellas showing off antique logging equipment and demonstrating log rolling, I imagined that my grandparents might have seen such demonstrations in their day too.

Pig racing. Hmm. It's possible I guess. Why not?

I walked around the domestic exhibition hall and looked at the canned fruit, cookies, cakes, and quilts and thought, "sure, they probably enjoyed checking out this type of exhibit too". The image pictured at left is an Elvis quilt. Obviously they were a bit before Elvis' time but I thought Terry might enjoy seeing it.

Then I wandered around the livestock exhibits. That was a no brainer. Surely they looked over the livestock. Probably had an expert opinion on them too!

By then, my tummy was telling me it was time to find something to eat. I wanted to try to find something my grandparents might have enjoyed for lunch at the fair. I mean, as long as I'm trying to recreate their experience, might as well get as close to it as I could. The only problem was, I don't know much about the history of food. What might have been offered at fairs in the early part of the 1900s? Did they serve french fries or elephant ears at fairs back then? I finally settled on a Hot Beef Sundae. It's essentially pot roast in gravy over mashed potatoes, topped with shredded cheddar cheese and a cherry tomato. Ummm. It was delicious!

Then I made my way through more livestock exhibits and strolled around the midway. Hmm. What amusement park type rides might have been invented by then? The only two rides that I was pretty certain were around back then were the Ferris wheel and the carousel. I didn't ride either but I did take pictures :-) 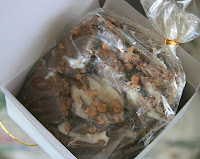 Once I made a loop of the fair grounds I decided to have one last treat before heading home. What to have was not a tough decision at all. I had a Vernors Float, otherwise known as a Boston Cooler (which was named after Boston Boulevard in Detroit, not the city of Boston, MA as many think). The float was made with Vernors ginger ale and Strohs vanilla ice cream. (Strohs is another made-in-Detroit name you might recognize better as a brewer of beer, but they make dandy ice cream too!) Oh man, was it ever good! Cold and crisp carbonated ginger ale with rich and creamy ice cream... ohhhh. Fantastic. Wish you could have joined me! The best part is, I know that both Vernors and ice cream were invented by the early 1900s. So there's every possibility that my grandparents and great grandparents enjoyed a Vernors Float at the State Fair too!

Here's a bit of info on the history of Vernors from Wikipedia:

In 1862, James Vernor was called off to the American Civil War. According to legend, he left a mixture of ginger, vanilla and spices sitting in an oak cask in a pharmacy he had been working in. After returning from battle four years later, he opened the keg and found the drink inside had been changed by the aging process in the wood. It was like nothing else he had ever tasted, and he purportedly declared it "Deliciously different," which remains the drink's motto to this day. Its current slogan is "Barrel Aged, Bold Taste!™". The apostrophe in the name "Vernor's" was dropped in the late 1950s.

Vernors is a golden ginger ale with a pungent flavor, more like a ginger beer. This style was common before Prohibition when the less flavorful pale ginger ale became popular as an alcoholic mixer. While Michiganders who grew up with it tend to like it, many other Americans are suspicious of it, as it doesn't taste like a "typical" ginger ale.

And on the history of ice cream:

The development of industrial refrigeration by German engineer Carl von Linde during the 1870s eliminated the need to cut and store natural ice and when the continuous-process freezer was perfected in 1926, it allowed commercial mass production of ice cream and the birth of the modern ice cream industry.

The location of the Michigan State Fair rotated around the state in its early years. If my great grandparents (who immigrated in 1881) attended the fair it would have been in 1883 or 1894 when it was held in Detroit, or possibly in 1901-1904 when it was held in Pontiac. They, along with my grandparents, may also have attended the fair in Detroit 1905-1941.