Lest We Forget 2009, St Joseph, Michigan

Patriotism. For most of us, it runs high when our county or countrymen are harmed or threatened but it fades into the background of our lives the rest of the time. Some of us will attend a parade on Memorial Day and perhaps a fireworks display on Independence Day. Others will stand and sing the National Anthem at baseball games and graduation ceremonies. But for the vast majority of us, patriotism is merely moments of time here and there when we reflect on the greatness of our country, our democratic way of life, and the brave men and women who have fought to make the United States of America the land of the free and the home of the brave.

But there's another group of folks out there who have taken patriotism to a whole new level.

These folks live and breathe patriotism. With the same passion that some of us have for researching our family history, these folks put on uniforms and re-enact our nation's history. They are dedicated to showing us live, in real time, what an amphibious landing in the Pacific theater was like during World War 2. They put on the 1940s era United States Army uniforms, grab their rifles, and re-enact the D-Day landing on the beach at Normandy. They storm a local airport by parachute so that we can see with our own eyes the sights and sounds of World War 2 without the terror and horror of actually having been there. These are the men and women of Lest We Forget.

It's hard to put into words what it was like to witness an amphibious landing of hundreds of uniformed soldiers on a Lake Michigan beach with St. Joseph's lighthouses in the background. As my eyes scanned the scene I was able to take in a crowd of thousands who had come to see the re-enactment, the military battle itself with gunfire erupting all around me, and a nearby beach crowded with sunbathers, beach volley ball games, and children building sand castles. Very surreal.

You could feel the anticipation and excitement in the crowd as the first amphibious vehicles approached the shore. 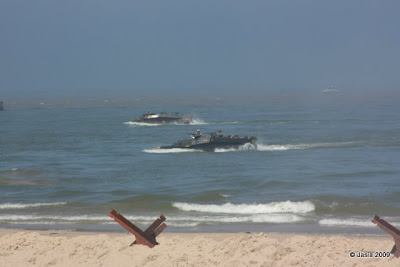 As the troop carriers touched the shore the soldiers jumped into the water and ran for the beach. 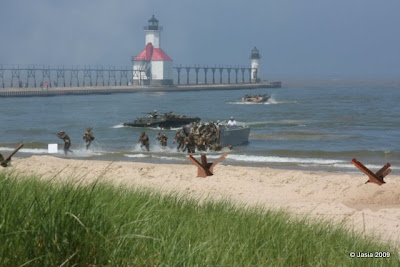 In a matter of moments they were hunkered down in the hot sand and firing away at the German troops embedded in the knee-high grass that grows abundantly along Lake Michigan's sandy shores. 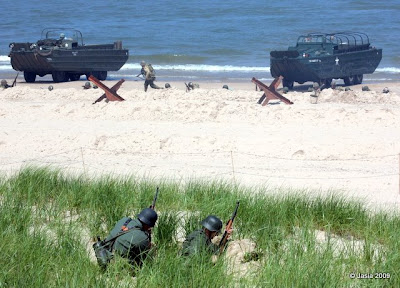 The sounds of rapid fire filled the air much as the haze of gun smoke did. 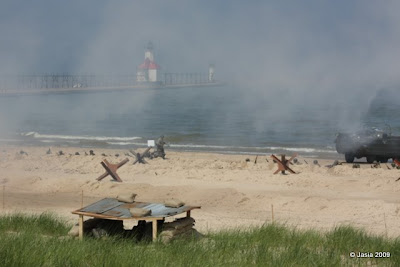 The crowd was mesmerized by what they were seeing in front of them. Those with press passes caught the action on cameras with foot long lenses from the best vantage points while the rest of the crowd caught what action they could between the heads of people standing in front of them behind the caution tape using point-and-shoot and home video cameras. 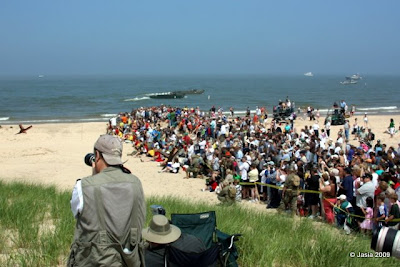 It wasn't long, just a matter of moments, until the battlefield was strewn with dead soldiers, reminding us that the fate our our loved ones was often determined by the bullet fired from the gun of soldier positioned just a few feet further up the sand dune. Just another guy who was as scared and just as determined that he was fighting for what was right. 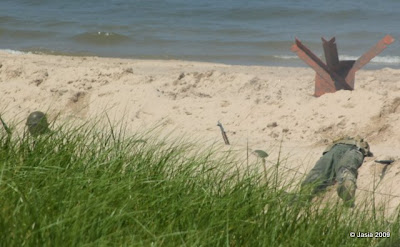 And then it was over. This simulated battle had ended. No one was really hurt. The soldiers all got up and walked away. So unlike the fate of many of our loved ones. The German officers sat at a picnic table and had a bite of lunch in the shadow of a Japanese flag that had been planted earlier in the day when a similar battle re-enactment from the Pacific theater had been performed. 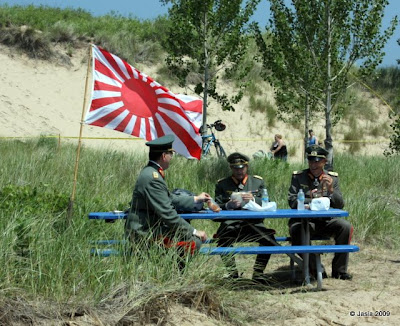 The soldiers too took a welcomed break from the action. 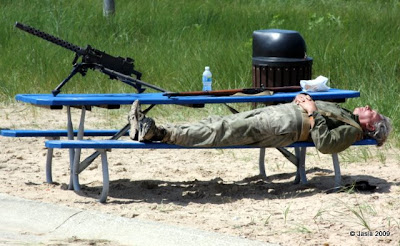 It was a day for remembering. A day for patriotism. It was brought to us by, Lest We Forget, an organization dedicated to promoting patriotism. It was a day I won't soon forget. My heartfelt thanks go out to the organizers and participants who fought in the lake shore and airport battles in St. Joseph and Benton Harbor, Michigan on June 20, 2009. You put on a helluva show!

My thoughts, of course, went to my uncle, Edward Lasky, who fought in the D-Day battle at Normandy. I couldn't help but wonder what he would have thought of this re-enactment. Would he have snickered at these actor's portrayal of that horrific day? Or would he have smiled at the crowd of thousands who were feeling the patriotism? Would he have felt pride in remembering what he had fought for? Or would he have been haunted by his army buddies that died on the beach at Normandy on June 6, 1944?

I leave you with one last image. This one is from the Healing Field of Flags, 1000 American flags on display at the entrance to the Southwest Michigan Regional Airport in Benton Harbor. These flags are displayed to honor departed, former and current veterans. This is the price we have paid for our independence. 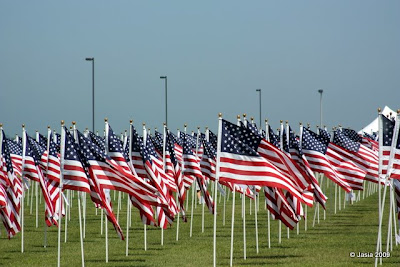